Intelligent children (who are well-organized and can understand calendars and priorities) are a dangerous thing. Yes, I was coerced by little people who cannot vote, serve in the armed forces, drink, drive, gamble or plan a well-balanced meal (but who know our yearly passes expire soon) to go to Disneyland.

It was Wednesday and not a holiday, so I anticipated the excursion would be rather harmless. But that was before I realized there is a huge "Haunted Mansion" cult out there who thinks observing this ride decorated with pumpkins for Halloween is worth missing both school and work.

In other words, Walt would have a panic attack if he could see that "it's a (very crowded) Small World after all" with this mob scene!

As I traipsed through the entrance congratulating myself for being a Southern California annual pass holder and bypassing the long lines out at the admission booths, I consulted a custom written Disney guide that my older son had typed out for me: "How to Best Optimize Your Time Without Losing Your Mind." He knew me well.

It seems that building one amusement park (centered around a deliriously happy rodent with a squeaky voice) is not enough; someone decided to build "California Adventures," which subliminally suggests to parents that they can double their fun if they simply go back and forth between BOTH ride/show/parade infested arenas -- thus the two-for-one "Theme Park Hopper" ticket was born. I'm sure when they were brainstorming names for this madness, some middle-aged woman suggested calling it a "Theme Park Dropper Plopper Flopper," but she was ushered out of the conference room. 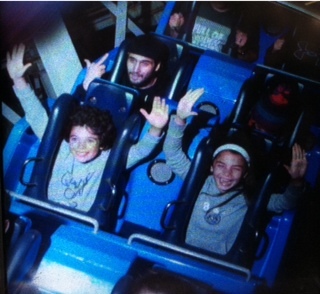 You must keep your hands and arms completely inside the ride, yet you are free to use sign language as you please. (demonstrated by Rude Guy sitting behind my kids)

I sent my children, who meet the height requirements for all the scary rides ("Twilight Tower of Terror" will age a person faster than any menopausal symptom ever will) ahead of me to go on Space Mountain. Meanwhile, I was supposed to (according to my son's detailed guide) go wait in a different line, thus reducing the minutes their impatient little bodies would need to stand around in order to ride on Splash Mountain. Yes! Disneyland likes the mountain theme. A lot. So there's Space, Splash, Thunder and even a realistic snow-capped mountain which is supposed to resemble the Alpine Peaks, called The Matterhorn.

But you don't need to know any of this. All you need to remember is a made-up word called "FASTPASS."

Is a FASTPASS a slow boat to China?

Me: Hi there. Is this long line for Space Mountain, Splash Mountain or Thunder Mountain? My son wrote me a guide specifying that we should go on those rides first before they get too crowded.

Line-Stander: None of those. This line is actually for FASTPASS.

Me: Oh! How tall do you have to be to ride FASTPASS?

And that's when I saw it! These people were standing in a zig-zag line all around Tomorrow-Land to obtain an official time-stamped card that would entitle them to return later in the day for a few select popular rollercoaster rides. You're getting this, right? A line to organize you to stand in another line. It's brilliant in a way that I cannot fathom.

Essentially, a FASTPASS is a reservation for a specific time to vomit

And not only that, people were running around all over Disneyland, (standing in these hour-long queues) to hoard bunches of these special little cards, like you would collect valuable property deeds in Monopoly. In fact, at a ride called "Grizzly River Run Rapids," the line to get issued a FASTPASS was actually far longer than the short five-minute line to get jostled around on the raft itself. 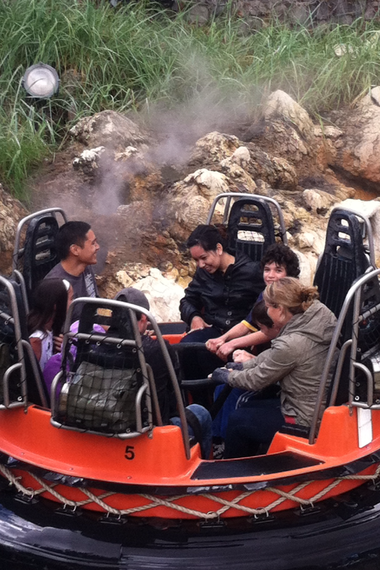 Me: Excuse me, but what are you doing getting a FASTPASS for this ride? Why don't you just go floating down that cold, dirty river right now?

Line-Stander: Our family doesn't like to get wet first thing in the morning.

Me: (taking a step back) Oh, so none of you have taken a shower yet??

And get this -- not only do you need to keep track of when you can "check-in" to the attraction you want to visit, but at the bottom of this highly prized card (in teeny, tiny print) is another time-stamp which tells you when you are able to acquire your next FASTPASS. So my cellphone was constantly ringing and chiming with different alerts and timers, telling me when I should do all of these things. Plus, a few well placed alarms reminding me when to take anti-anxiety drugs.

Walt would have turned over in his grave... but first he'd need a FASTPASS to do it!

And some of these (free) FASTPASSES get sold out by 10 a.m.. That's right -- you wait in a long line and make your way nearly to the front, (where a revered machine dispenses these hot little devils) when suddenly, a brave Disney Worker (officially deemed a "cast member," possibly because they dress up as animated characters, but more likely because they will soon play the part of a murder victim) places a large placard up that states, "There will be no more FASTPASSES Available today." And then he quickly ducks. Yes, like Donald.

Arriving late for your time slot is another total disaster unless you have a good reason for being tardy. Captain Hook refused to let us fly to NeverLand with Peter Pan until I came up with an alibi -- we got stuck on one of Disney's old, broken-down trains, PLUS we had to go to the First-Aid Station after Mary Poppins purposely tripped my youngest with her umbrella. Captain Hook bought that story after I told him that he could also sue Disney for his missing arm. 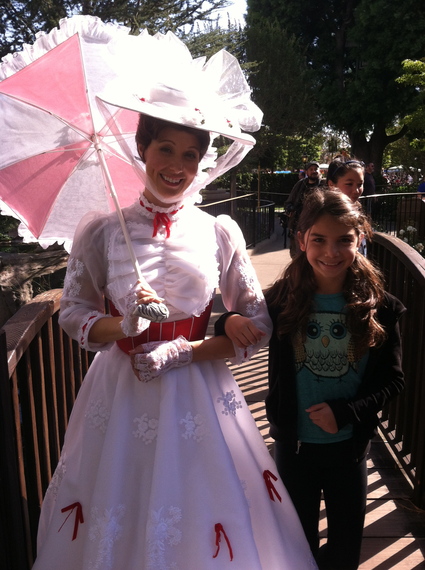 I don't know but I think Dick Van Dyke probably took out a restraining order against our gal, Mary.

Now let's get one thing straight. I arrived at Disneyland at 8 a.m.. and by 5 p.m., I had put in a good day's work. My shift was over and I was ready to punch out. I had even taken to whistling that wretched Disney tune "Hi-Ho, It's Home From Work We Go." The only problem was that we still had those darn coveted FASTPASSES for three of the most insanely wild rides in the park. And they could not be used until 7 p.m.. My children would not budge toward the parking lot.

But of course, this was a non-issue for a clever "cast member" like myself. Nobody here had seen the likes of acting anywhere close to what this Drama Queen Mother can perform. I sprinkled water from that disgusting river across my face, flung my hand dramatically up to my forehead, and approached someone in a Disney Prince costume. I wisely refrained from batting my eyes flirtatiously in Mr. Charming's direction.

Me: Excuse me. My children have waited all day long to use these FASTPASSES that aren't valid until two hours from now. As you can see, I feel quite faint and was wondering if you might let these Poor Innocents ride just a bit early?

Prince Charming: Your skin does look White as Snow. I'll make an exception for your "Little Dwarfs" just this once. Perhaps you might like to lie down in that glass coffin around the corner until their finished.

Me: (Dirty Look) Thank you. You're a Prince.

Well, that was easy-peasy, queasy! At the next ride, I feigned stomach cramps and someone who looked like Goldilocks said perhaps I should go kick my porridge habit. But Yes! She would let my "Three Little Bears" on the ride early to help me out. Bless her little heart of gold, (which was neither too soft nor too hard.)

So, I was onto something here! At the third and final ride of the day, I approached an Alice in Wonderland lookalike and made my case of a twisted ankle, limping convincingly up to the entrance. She admonished me to be careful walking around White Rabbit Holes, but agreed to let my children on if they could smile like the Cheshire Cat for her.

Just as my three well-trained kids were breaking into that goofy feline grin, out stepped Prince Charming and Goldilocks from behind some mouse ear-shaped bushes (you'll never convince me they were just trying on slippers) and informed a shocked Alice that earlier my legs had worked perfectly fine. Still I was a (mentally) sick woman, and they proceeded to recount how I already had a headache, stomach cramps and I could faint any minute now. But I definitely did NOT have a sore leg. For shame! Was this any kind of example to set for my children, they demanded?

Alice In Wonderland: What kind of parent demonstrates your brand of deceitfulness?

Me: (tossing our FASTPASSES in her face) An Evil StepMother! C'mon kids... we're going home before the clock strikes midnight.

Me: (cackling maniacally) Hush up and eat your Poison Apples!! 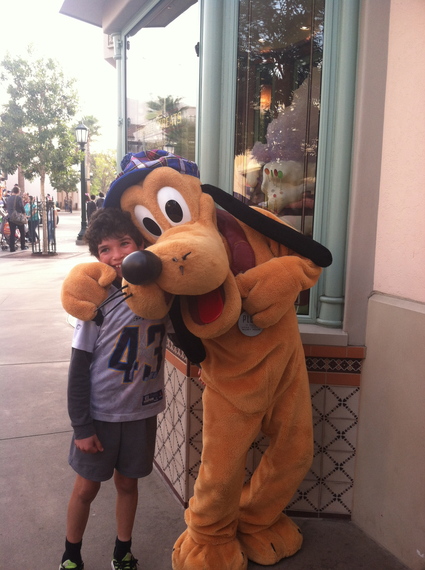 Pluto, giving my son a consoling hug because he has such a "Wicked Witch" of a mother

Originally published on author's humor blog, Once Upon Your Prime.