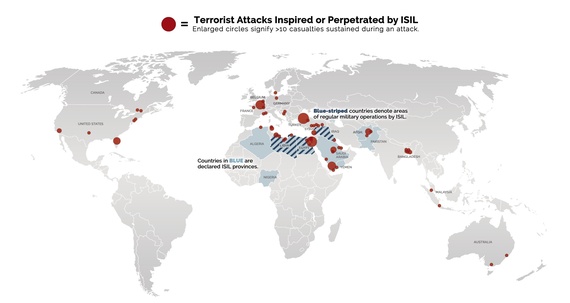 On June 28, 2016, President Obama's Special Envoy to the counter-ISIL coalition testified to the Senate Foreign Relations Committee that the Islamic State as an organization is undergoing its most treacherous time on the battlefield.

"The trajectory is positive," Brett McGurk commented in his opening statement. "ISIL has not had a major battlefield victory in over a year. It has lost 47 percent of its territory in Iraq, and 20 percent in Syria. More important than percentages, however, is the strategic nature of the territory that ISIL has lost."

Islamic State fighters have been on the back-foot in Syria and Iraq ever since Iraqi security forces and U.S. air-power retook the Anbar provincial capital of Ramadi in December 2015. Indeed, since that time, it has been all downhill for the self-proclaimed caliphate: the Iraqi army is improving in capability and getting more professional with its tactics and strategy; ISIL's oil production has decreased by 50% and its oil profits have declined by 30%; and the group's leadership has witnessed an exponentially lower number of foreign fighters crossing the Turkey-Syria border, thereby limiting its recruitment and ability to defend its territory.

John Brennan, the Director of the Central Intelligence Agency, had a somewhat different assessment of the situation. Speaking to the Senate Select Committee on Intelligence, Brennan painted a more dire picture of ISIL's overall strength. While U.S. airstrikes have pummeled ISIL's checkpoints and strategic positions over the past two years, Brennan argued that the group is still very much able to plan, orchestrate, and inspire terrorist attacks around the world. "[D]espite all our progress against ISIL on the battlefield and in the financial realm," the CIA chief said, "our efforts have not reduced the group's terrorism capability and global reach. The resources needed for terrorism are very modest, and the group would have to suffer even heavier losses of territory, manpower, and money for its terrorist capacity to decline significantly."

Brennan's views have proven to be prescient over the past several months. And yet the conventional wisdom dominating Washington remains unchallenged: that to wipe ISIL out for good, all the United States needs to do is strike a spear at its center of gravity in Mosul and Raqqah. In fact, this continues to be the central objective of the global coalition: isolate the group's fighters in both cities, conduct shaping operations, and squeeze ISIL to the point where local forces will have a much easier time retaking the area.

The conventional wisdom, however, is misplaced. Why it is always useful for terrorist organizations to possess a safehaven to recruit young men to their cause and plan large-scale, coordinated operations, the simple fact is that the Islamic State doesn't need Mosul or Raqqah in order to kill innocents around the world. This is exactly why fighting international terrorism is such a difficult endeavor - capturing territory is not necessarily a good indicator or metric for determining success or failure.

ISIL has demonstrated this vividly over the past two years and most significantly in Western Europe over the past seven months. Since the first U.S. bombs were dropped on ISIL targets in Iraq in August 2014, terrorism attributed to the group has not only continued, but has gotten deadlier. The list of ISIS-inspired or directed attacks on civilians in the Middle East, Afghanistan, South Asia, Europe, and the United States is nearly endless: a storming of the Canadian parliament building; a man attacking New York City police officers with a hatchet; a takeover of a cafe in Sydney, killing two hostages; the beheading of 21 Egyptian Christian missionaries in Libya; coordinated bombings and attacks against Egyptian security forces in the Sinai; an attack on a museum in Tunisia, killing 22; an attack on a tourist resort in Tunisia, killing 38 tourists; a series of suicide attacks on Shia mosques in Saudi Arabia; a double suicide bombing in a Beirut shopping district; suicide and shooting attacks on restaurants and a concert hall in Paris, claiming the lives of over 100 people; a mass shooting in San Bernardino, California that killed 14 office workers; a series of suicide attacks an an airport in Brussels; a massive truck bomb in a Baghdad shopping district, killing nearly 300; a series of suicide attacks at Ataturk International Airport in Istanbul; a man plowing through large crowds celebrating Bastille Day in Nice, France; and just last week, a suicide bombing of a peaceful rally in Kabul, Afghanistan, resulting in more than 80 people murdered. Many of these attacks were not directed from Syria or Iraq nor required millions of dollars and expert bomb-makers to carry out, but were rather executed by a single individual or a small group of conspirators who never traveled to Syria or Iraq in their lives.

The point of rehearsing this list of doom and gloom is not to highlight ISIL's strength or to portray it as 10-feet tall. Rather, it is to illustrate that whatever happens in Raqqah and Mosul in the future, it is highly likely that ISIL will continue to call for attacks on soft targets in the west and in the region - and that a small faction will remain, however minute, that will feel compelled to answer the call.

On September 20, 2001, nine days after Al-Qaeda destroyed the World Trade Center towers and damaged a section of the Pentagon, President George W. Bush addressed a joint session of Congress and declared a worldwide war against terrorism. "Our war on terror begins with Al Qaeda, but it does not end there," Bush told the American people that day. "It will not end until every terrorist group of global reach has been found, stopped and defeated."

Ever since that time, the United States has been expending an enormous amount of blood and financial treasure on that war. By declaring a war on terrorism, President Bush set a precedent that President Barack Obama largely followed; taking the fight to the enemy with the sole objective of destroying terrorist groups that threaten the United States and its allies. Unfortunately, we have yet to recognize that terrorism cannot be defeated; it can only be contained, rolled back, and mitigated to an extent that allows people to live their lives without fear. U.S. policy over the past fifteen years has rested on a faulty assumption that full and complete victory was actually in the cards.

Whether we like it or not, the Islamic State will continue to survive and international terrorism will continue to be utilized by fanatical, ideological, or extremist individuals who believe it is effective to get a political point across by putting killing innocent people and paralyzing whole societies with fear. Even a quick and painless route of ISIL in Mosul and Raqqah will not alter that basic piece of common-sense. Politicians and national security officials in Washington need to start giving the American people the hard truth instead of setting up false expectations that not even the world's greatest superpower can meet.

Daniel R. DePetris is a fellow with Defense Priorities