The rain comes down so heavily that the grass becomes a muddy pond. Rings of water droplets are visible from inside the house, as I look out the window.

My daughter asks for snow and, at one point, excitedly thinks she sees it, but it's only the rain, become so thick she has mistaken it. 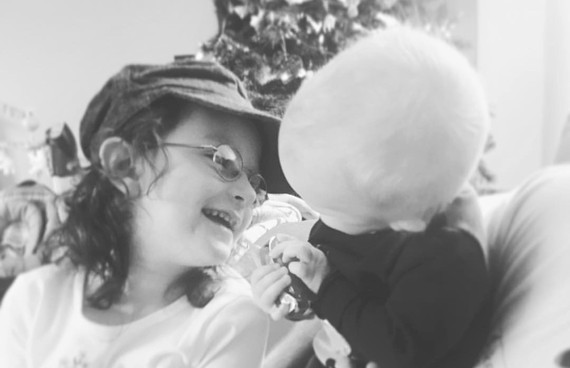 Smells of onion and sounds of sizzling and chopping and a little-girl, sous-chef voice trickle in from the kitchen. The baby carries a book around as big as her own body, and makes small breathless grunts as she heaves it up onto their play table and onto her new bean bag chair that's too large for her.

The computer is nearly dead from not being plugged in. It's sat unused and without care during several days of family time. Every day my daughter asks if she can go to school and, like the optimistic being she is, seems OK, if slightly disappointed, that she still has to stay home with me.

I unplug from social media, especially from Facebook, because I find it annoying me and detracting from my emotional well-being, but I don't make a grand statement about this neglect. Instead, I talk to my husband, about things that have been weighing on me but I've left unaddressed for many reasons. We marvel together over the adorableness of our daughter in her new hat. We wipe drippy noses of a baby with a cold, and we hug, until one of our children comes to pry us apart and pull our attention somewhere else.

The onion scent becomes stronger, but also finer, as it's sautéed and melds into what will be soup.

The sizzling sound changes, too, and I notice the absence of baby grunts. I pop up quickly from my chair at the dining table to see where she's gone off to, and I find her in the pink-and-white chevron-patterned teepee, playing with a cloth book.

She gets up quickly, too, acting as if she's doing something wrong, but she isn't, and now her audible efforts to move bigger-than-her objects and climb on top of things, combined with the occasional thud of a book falling, rejoin this post-holiday atmosphere.

My neck hurts terribly from not sleeping well and from not exercising yesterday. My shoulders feel stiff and I know I'll need to move my body at some point, but I don't feel ready yet.

The baby whines at my husband's legs while he stirs milk into coffee. She holds her arms up and he tells her, "Just a second." My oldest makes sounds of "helping" -- light clangs and small tings and "OK" and "here we go" echo out from where she stands on a chair next to the big bamboo cutting board that we never put away.

This simple morning -- of small children with colds, and of recreating holiday leftovers, and making coffee, and writing, and imaginations of little girls -- settles into and fills the spaces of my cranky muscles that I hadn't realized hurt from feeling emotions bigger than they can carry.

I'm grown, but my emotions are sometimes larger than I want to handle, and these moments encourage me to remember how my girls must feel -- so small are they; so big are their experiences.

I'm called away again from my internal contemplation by a need to go get new pants for the baby. My husband isn't sure why her pants were wet, but takes no chances in asking me to stick them in the laundry basket and find a new pair.

And that's the most challenging part of being a parent, for me at least -- it's not having this space to be fully still for a random five minutes and feel something weighty; or to be lazy; or to watch a movie in one sitting rather than the three or four nights it will usually take.

Being a parent to young children is all-consuming -- it's present in every small crevice of my heart and, more, it is what my life is completely wrapped up in. I am not complaining.

For years we wanted children until we had our first, and our marriage is never secondary, but it's also not always first anymore, either. It's all a balancing act.

It's holding one person's hand, while making room for two others (when we only have two hands); it's finding time to be an "us," and to be a "mom" and a "dad," and an individual, too.

We sat on the couch yesterday afternoon, cuddled up together, with children on laps and our hands clasped, and he said he knew if he didn't get up and go biking now that the rain would stop him for days (at best). But he didn't move. He clutched my hand more firmly and kissed a baby's head, and we settled into an imperfect day filled with such perfection that we didn't want to burst it with sudden movement.

The sudden movement of reaching for a cell phone, instead of taking in a still moment with my daughters; the sudden retraction of my hand so I can take a sip of wine; the sudden letting go of doing nothing, to do something more "productive."

No, the hardest part of being a parent is when I want so badly for this second to last an hour, but also for this day to move forward, and into an easier time of my life.

More:
Parentsparents-momsvoices
Newsletter Sign Up
Raise the kind of person you'd like to know
Subscribe to our parenting newsletter.
Successfully Subscribed!
Realness delivered to your inbox