If you still have not heard of the Harlem Shake you must be living in a cave. Much has been written about the rapid and global spread of this catchy internet meme, yet little is understood about how it spread. In the following post, we look at the meme's emergence through the lens of Twitter data. A series of remixed videos along with a number of key communities around the world triggered a rapid escalation, giving the meme widespread global visibility. What can we learn from data? Who were the initial communities behind this mega-trend? Who were some of the trend-setters, and what did the Jamaica techno-DJ scene have to do with this? 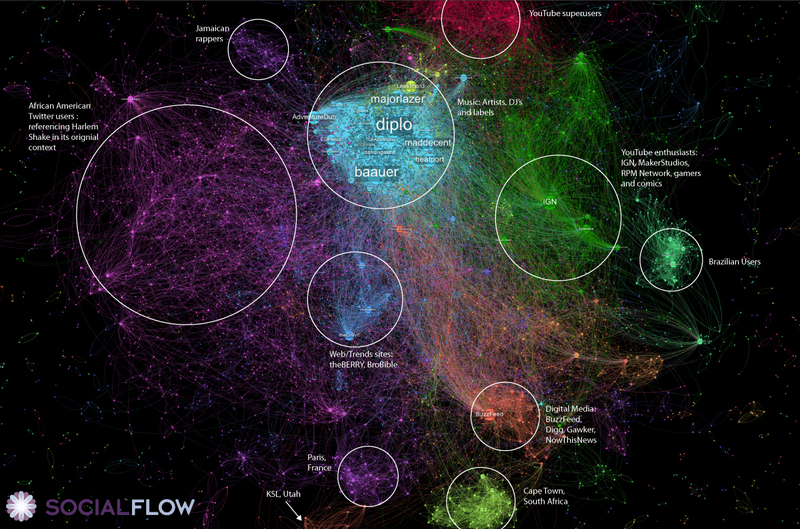 The Harlem Shake is a dance style born in New York City more than 30 years ago: "During halftime at street ball games held in Rucker Park, a skinny man known in the neighborhood as Al. B. would entertain the crowd with his own brand of moves, a dance that around Harlem became known as 'The Al. B.'" Though it started in 1981, the Harlem shake became mainstream in 2001 when G. Dep featured the dance in his music video "Let's Get It".

While mining Twitter data, references to Harlem Shake (the original dance) were seen quite often prior to it becoming a popular meme. For example, users would write Tweets referencing the dance in the following manner:

Finally back in LA. I have almost 2 weeks of prepping and me time! *harlem shakes*

There are numerous examples of Tweets with this phrase in this context (here are a few examples), many of them using the * character as an emphasis. Kimberly Ellis, a Scholar of American and Africana Studies, claims that this type of language is simply being referenced via cultural memory. And users are very dramatic, hence they place "action items" in tweets:

When someone tweets, "I just passed my final exams! *harlem shakes*," it's the equivalent of saying "I just passed my final exams! Look at me dancing!" As you can see, the Harlem Shake of cultural memory is SO energetic, recalling the visual in a tweet makes it all the more hysterical and another shared, cultural moment for African Americans on Twitter.

While Bauuer's now infamous track was released on Diplo's Mad Decent label back in August 2012 (posted to YouTube on August 23 2012), it only accrued minor visibility for the first few months. Then February hit, and something changed.

The timeline below highlights the very first days as the meme was taking off. In blue, we see references to the 1980's dance *harlem shakes*. Note the diurnal pattern, rising and falling steadily on a daily basis. In contrast, the green curve represents Tweets that use the phrase 'The Harlem Shake', many of them linking to one of the first three versions of the meme on YouTube. 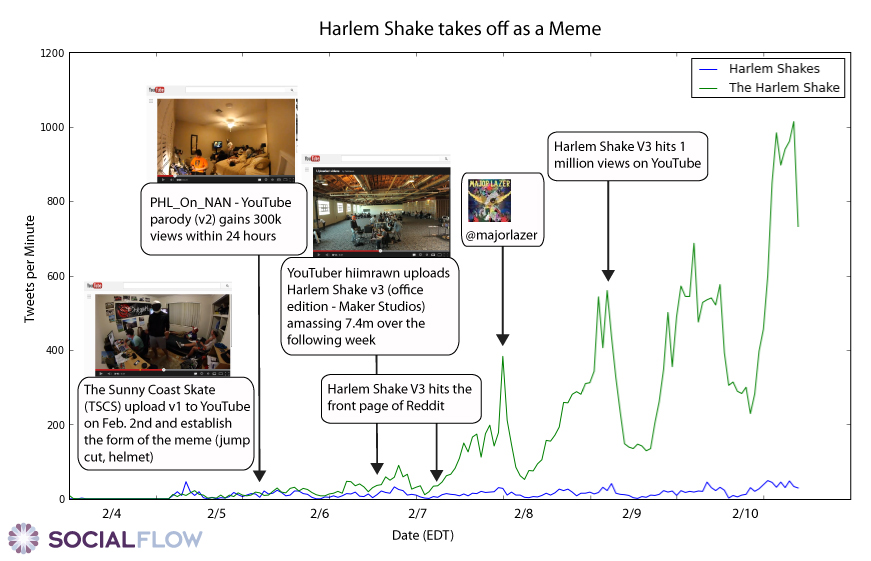 On February 2, The Sunny Coast Skate (TSCS) group establish the form of the meme in a YouTube video they upload. On the 5, PHL_On_NAN posts a remix (v2), gaining 300,000 views within 24 hours, and prompting further parodies shortly after. On Feb. 7, YouTuber hiimrawn uploaded a version titled "Harlem Shake v3 (office edition)" featuring the staff of online video production company Maker Studios. The video becomes is a hit, amassing more than 7.4 million views over the following week, and inspiring a number of contributions from well-known Internet companies, including BuzzFeed, CollegeHumor, Vimeo and Facebook.

In a video interview, Vernon Shaw, Channel Development Coordinator at Maker Studios (produced v3), claims that he spotted the first two versions on Reddit. It was evident that a form was emerging, and after v2 accrued 100k views, it was clear to him that this was the "pre-viral" stage. Vernon attributes Reddit for being first to highlight the remixes, claiming that "you can tell when a trend is about to start by catching it on Reddit first... a day or two ahead of Facebook".

Here's a graph that shows retweets during the first week, as the meme was being established. We can identify dominant profiles who helped make the videos visible on Twitter, key information brokers. Each node represents a Twitter user, and the larger a node, the more Retweets that user generated when posting to the meme. The lighter colored participated earlier, hence we see @baauer, @dipio and @maddecent very early on, posting to Twitter and accruing Retweets. On the bottom right region, we identify influential YouTubers who were key to passing on the meme, such as @kingsleyyy, @KSIOlajidebt, @ConnorFranta, and @Jenna_Marbles. Note the general size of these profiles versus @StephenAtHome (Colbert) or even @YouTube. These influential YouTubers clearly played a prominent role in generating buzz across Twitter, much more than significantly larger accounts such as Stephen Colbert's or YouTube itself. 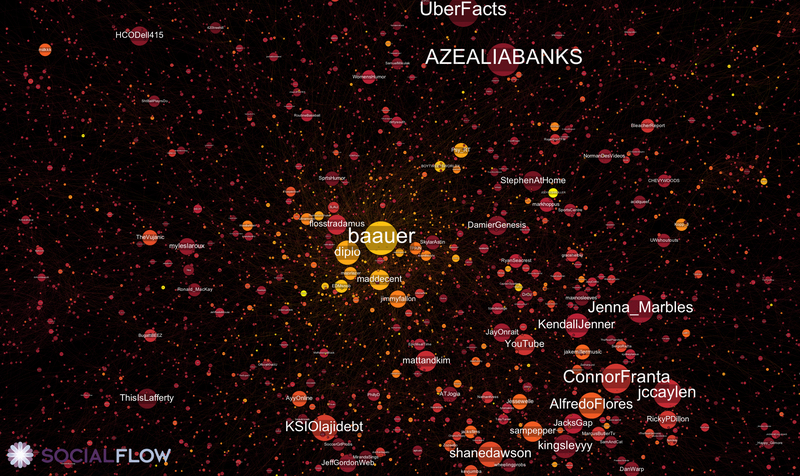 Next, instead of mapping out Retweets, we look at the social connections amongst users who were posting to the meme. This gives us the ability to identify the underlying communities engaging with the meme at a very early stage. In the following graph each node represents a user that was actively posting and referencing the Harlem Shake meme on Feb 7 or 8 to Twitter. Connections between users reflect follow/friendship relationships. The graph is organized using a force directed algorithm, and colored based on modularity, highlighting dominant clusters - regions in the graph which are much more interconnected. These clusters represent groups of users who tend to have some attribute in common.

One of the most dense clusters includes @baauer, @diplo, @maddecent and other DJs and musicians. They are clearly a core community who were posting the meme early on. We identified this clearly in the previous Retweet graph. In red and green (top, right) we see regions of the graph highlighting various YouTube communities. These are users whose dominant web identity is their YouTube page. While many of them have Twitter handles, they all link to their YouTube page as a primary identity, while many describe themselves as 'YouTubers.' We see a dense Brazillian user community (right), Jamaican rappers (top center-left), cape town (bottom) and users from Paris, France (bottom center-left). In the center, there are accounts such as BroBible and theBERRY/theCHIVE who were one of the first new-media outlets to identify the meme as interesting.

The purple region in the graph (left side) represents African American Twitter users who are referencing Harlem Shake in its original context. There's very little density there as it is not really a tight-knit community, but rather a segment of users who are culturally aligned, and are clearly much more interconnected amongst themselves than with other groups.

If we run a similar analysis on the following two days (Feb 9 and 10) we see different communities emerge, and a much more tightly knit graph structure: 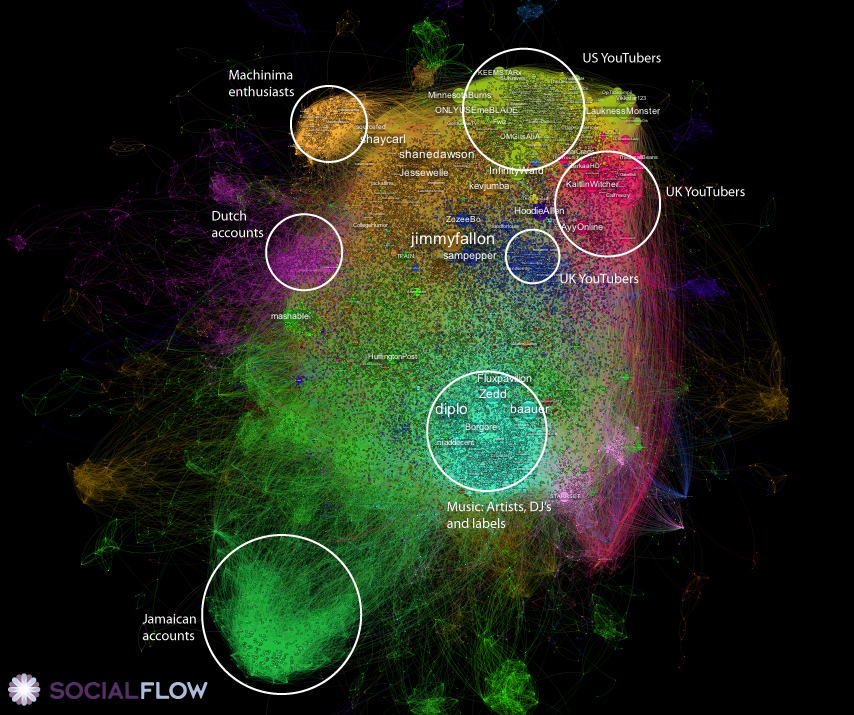 While the same dense cluster of musicians and DJs (in turquoise) still exists, there are substantially more self-identified YouTubers both across the US and the UK. At the same time there's a significant gamer / machinima cluster that's also participating, as well as a growing Jamaican contingent, and quite a few dutch profiles (purple -- left). Additionally, we see various celebrity and media accounts who caught on to the meme -- @jimmyfallon, @mashable and @huffingtonpost.

By capturing the two snapshots, we can also make sense of the evolution of the meme as it becomes more and more visible. At first, loosely connected communities separately humored by the videos. Within days, we see major media outlets jump on board, and a much more intertwined landscape. We see different regions in the world light up, and identify communities of important YouTube enthusiasts who effectively get this content to spread.

In this case we see a clear network of influential YouTubers across the U.S. and the U.K. combined with a dense cluster of musicians and DJs who helped make this meme incredibly visible. We also see how it very quickly spread around the world, with dense contingents in Jamaica, South Africa, Brazil, France and the Netherlands. By comparing two snapshots in time, we literally see the difference between an emergent trend amongst loosely connected interest-based communities, to a dense more-connected cluster where digital-media outlets do significant amplification.

Memes have become a sort of distributed mass spectacle. Culture is being created, remixed and reinforced within social networks, and memes are becoming a mechanism that both capture people's attention, and define what is "cool" or "trendy." We see more and more companies and brands try to associate themselves with certain memes, as a way to maintain a connection with their audience, gain the cool factor. Pepsi did this with the Harlem Shake and saw an incredibly positive response. As we get better at identifying these trends and trend-setting communities early on, the pressure to participate will rise.

As social networks become globally-intertwined, we're witnessing a growing number of memes conquer the world at large. These moments are critical points in time, where there are significant levels of attention given towards a specific entity - be it a joke, funny video or a political topic. Piecing together data from social networks can help us identify critical points in time, as well as the underlying communities and trendsetters for the humor-based memes, or the agenda setters for politically-slanted ones.

The analysis is based on 1.9 million Tweets collected between February 1 and 16, all referencing variations of the phrase 'harlem shake'.