Home of 'Out of Town News' and one of the most iconic structures of Cambridge, the Harvard Square Kiosk is in peril. The 500-square-foot Kiosk that has served as a hub for academics, residents and students alike, may soon be unrecognizable as a result of the 'Harvard Square Placemaking' project, which brings forth major redesign and reconstruction to the Harvard Square.

Why the Kiosk Matters

The project has generated uproars from concerned individuals for several reasons. Firstly, it calls for the complete overhaul of a historic landmark of high architectural significance. The proposed redesign will strip the iconic structure of its century-old copper and brick and insert glass and LED lighting, shedding it of its historic essence.

Secondly, the project also comes with a hefty price-tag - $4.6 million that will come out of the pockets of taxpayers. Although the City of Cambridge has insisted on a transparent design process that allows public input, there are allegations of misinformation, corporate nepotism and restricted meetings where key decisions have been made. Lastly, the redesign of the Kiosk is one of many initiatives that are transforming the beloved Harvard Square, diminishing its heritage, altering its personality and stifling local businesses.

Image Credit: The Galante Architecture Studio
A proposed render of the re-design of Harvard Square makes drastic changes to the historic structure.

Lending a voice to those who are concerned and troubled about the loss of a significant symbol of the Square, a grassroots local group by the name of 'OurHarvardSQ' has taken on the initiative to establish a collaborative design process in the hope of preserving the distinctive personality of Harvard Square. A crucial goal of their efforts is the preservation of the beloved Kiosk. With the Kiosk currently having limited protection under the Harvard Square Conservation District, whose conflicting goals often put preservation at a disadvantage, OurHarvardSQ is striving to have the Kiosk designated a City of Cambridge Protected Landmark. The efforts have resulted in a formal petition as well as an online petition that is addressed to the Cambridge Historical Commission, calling on City Council members and demanding an enhanced level of protection. 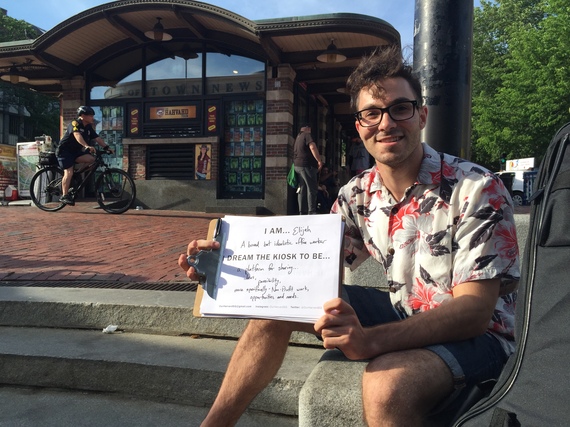 Image Credit: OurHarvardSQ
To raise awareness of the Harvard Square re-design process and the imperative to seek public input, OurHarvardSQ conducted a campaign to collect ideas from the public on what they "Dream the Kiosk to Be."

With Clarence H. Blackall of the renowned Boston architectural firm Blackall, Clapp and Whittemore leading the design process, the Kiosk was constructed in 1928. Built as the entrance to Harvard Square's new subway, the Kiosk became home to the celebrated 'Out of Town News' in the early 1980s, selling every major newspaper and journal from around the world. With the internet now revolutionizing the way we receive world news, Out of Town News is a stark reminder of a business that once had a noble concept. Safe guarding the integrity and character of this historic structure will help preserve it for future generations to come.

A native of Illinois, Clarence H. Blackall took up residence in Boston after training at the Ecole des Beaux Arts in Paris. Blackall and his firm are responsible for the design of over 300 theaters, including Boston's spectacular Wang Theatre and the Gaiety Theatre. The design of the elegant Copley Plaza Hotel and Boston's first steel skyscraper, the Winthrop Building, are also credited to Blackall. The Kiosk shares certain architectural features, such as alternating brick and limestone courses as well as a theatrical copper roof, with the Winthrop Building. An architectural icon, the Winthrop Building is now under Landmark review in Boston.

Blackall was pivotal in helping to establish the Boston Architectural Club (now the renowned Boston Architecture College or BAC). At the time of its establishment, the BAC sought to launch accessible architecture education. As a result, immigrants who came to Boston in the early decades of the twentieth century could learn architecture while pursuing employment. To present day, the BAC continues to provide the world with much needed skilled architectural workers.

OuHarvardSQ's online petition to seek Landmark status for the Kiosk currently has over 700 supporters, with others being compiled locally. In September 2016, a formal petition was submitted to the Cambridge Historical Commission. On November 3rd, a hearing by the commission will make the crucial decision as to whether or not a Landmark Study will be initiated to have the Kiosk be added to the list of other 37 Protected Landmarks that are currently in Cambridge.

The threat to the Kiosk is not the only one, although it is the most notable. Three nearby historic buildings, one of which houses the 'only Curious George store in the world' have been purchased by out-of-state developers who are planning to replace the current characteristic design with a slick, glass-enveloped design. Hyper-modern structures will then loom over the Harvard Square Kiosk and other key parts of the Square, eroding the square of its distinctive architecture and personality.

Those who are fighting for the preservation of the Harvard Square Kiosk describe it as the 'canary in the coal mine', singing out a cautionary tale of its own demise, all the while stressing the importance of making preservation an imperative part of architectural innovations. OurHarvardSQ warns that if government process and incongruous development remain unchecked, beloved icons like the Harvard Square Kiosk will be an incredible loss to us all.

For more information on OurHarvardSQ and their initiative: