Dennis Hastert says he's the victim of his own cover up for improper sexual contact with a young man while he was a teacher in Yorkville, Illinois decades ago.

Sadly, we Americans are all victims of the Hastert Rule, a polarizing force in American national politics for over 12 years.

His "majority of the majority" policy, which curdled into the Hastert rule drives partisanship in Congress.

Can we get rid of the thing? 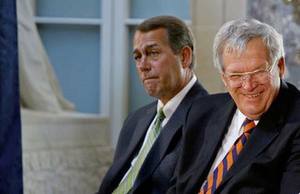 Dennis Hastert was two heartbeats from the Presidency for eight years from 1999 through 2007. Now he stands accused of lying to the FBI.

The "Hastert Rule" he famously outlined in 2003 requires a majority of vote in the House of Representatives from the majority party to advance any legislation, and is a major driver of the unyielding partisan behavior in Washington today too.

How? By limiting floor votes on Bills without 123 Republican votes, any legislation proposed by remaining moderates in their party is impossible. (Using today's House of Representatives composition with 245 Republicans to 170 Democrats)

Democrats need 123 Republican votes to advance a bill in addition to their 170 votes in favor.

It only requires 218 votes to pass a bill in the House.

The officially "informal" but in practice strictly adhered upon Hastert Rule has been only thing between bi-partisan legislation passing congress on hot topic issues. A prime example is immigration reform which passed the Senate with 68 votes last session, but died in the House without an up or down vote.

Alas, these bipartisan occurrences are instead exceedingly rare.

A 10-year stretch between bills passed in a Republican-controlled House, without the majority of Republicans supporting it ended with the passage of the "Fiscal Cliff" Bill in 2013.

While many Speakers purport to have used, and even found counter-strategies to defeat the formerly unspoken "majority of the majority" rule in our Congress, the "Hastert Rule" cemented it into the functioning - or dysfunctioning of Congress today.

Call him a hypocrite, but the accused former Speaker has alternately denied the existence of a "Hastert Rule" and simultaneously defended its overt use by the Speaker of the House.

Eventually, Hastert and the GOP were sent into the congressional minority after the Foley sex scandal and concurrent Cunningham bribery scandal combined with scandalous revelations from lobbyist Jack Abramoff.

Many questioned the halting, sometimes comical response of Dennis Hastert to one of his caucus attempting to pick up high school boys. In hindsight, the personal fear of exposure must've been paralyzing. It took a lot more to pursuade voters to turn he and the GOP out of power.

One might have concluded that Hastert's rule hastened the onset of congressional overreach in his party judging by the actions of his caucus.

The former wrestling coach might not have overtly intended the maneuver to corral dissidents on both the right and left sides of his party, during his business and 'culture wars' centric term as Speaker of the House, but it worked.

Certainly, the main effect was making sure Hastert stayed in the Speaker's chair, since by definition such a rule would encourage loyalty over adventure.

Hastert became the longest-serving GOP Speaker of the House.

Over time his rule evolved from an informal barometer into a serious political deal breaker for a GOP Speaker to cross for eventual successor John Boehner.

Moderate and so called "Rockefeller Republicans" fled the party in droves, knowing that working across the aisle would have limited possibilities, but tremendous risks since 2003 and the party has shifted rightward after the Repbulican Tea Party era started in 2010.

Speaker Boehner even shut the government down, rather than pass a bill without majority support from his caucus.

The Hastert Rule's "informal rule" has become the measuring stick for the Republican party's management of the House of Representatives and a condition to remain Speaker.

Do we really want the rules of America's Congress written by a man whose grave sexual misconduct resulted in the need to lie to the FBI?

The answer is no.

The Hastert Rule must go, so our Congress can get back to governing in the best interests of every citizen, not just that minority of Americans who voted for the majority of the majority.