Jesus proclaimed "The Kingdom of God is at hand!" He delivered the inwardly afflicted and healed the sick. In the Gospel of Mark, Jesus heals lepers, the lame, the blind, and those suffering from other ailments, furthering God's redemptive work in the world.

Those touched by the healing hand of Jesus include women: the mother-in-law of Peter, the daughter of Jairus--the Synagogue leader, and the woman with an issue of blood. In Mark 5, on the way to attending the dying daughter of Jairus, a woman with an incurable bleeding problem touched Jesus and was healed. He felt the power going out of him. After arriving at the home of the sick girl--now reportedly dead, Jesus took her by the hand and declared, Talitha koum (Aramaic for "little girl, arise"). She arose, and all were astonished.

Whether Jesus is touched or is the one taking the hand of the other, he declares that human faith is a factor in the work of healing. In sending out his followers to preach, liberate, and heal, Jesus also extends his ministry to the rest of the world in partnership with his friends. And, in so doing, we are all reminded that we exist not for ourselves, but for the healing of the world. 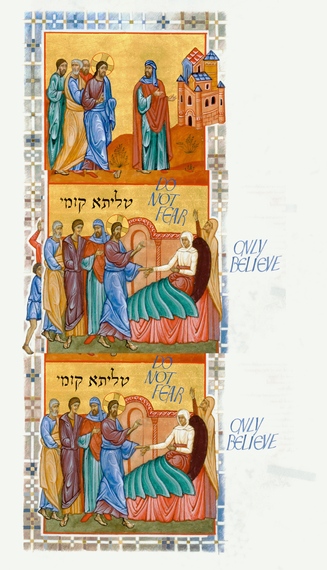