Live community music during the holidays is one of the most life-affirming gifts we can offer and receive. But what about those who can't get out to hear all this wonderful music? Many chorales all over the country bring music to elders in senior centers, to homeless shelters, and hospitals. Every year when my Seattle Metropolitan Glee Club offers our holiday concert to elders in senior centers, I'm reminded of the first time I witnessed this Christmas miracle of community song. 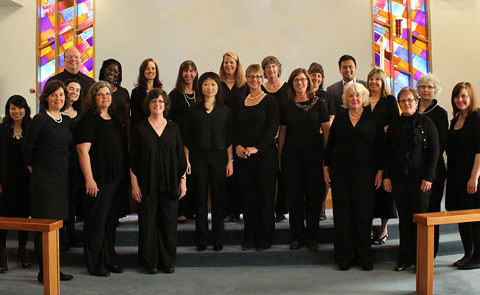 When I was 15 in Northern Virginia, our church youth choir carried our Christmas treats and our singing to the prestigious and widely-revered St. Elizabeth's mental institution in Washington, D.C. The complex cantata we had practiced all fall was called "Night of Miracles," and in addition to my mother's piano accompaniment, our performance would be bolstered by the choir's diva, Mrs. Helena Simmer. Her rich, dark mezzo-soprano voice was reason enough to go to church. Mrs. Simmer had sung professionally before succumbing to the fate of many a Southern Baptist wife -- motherhood, under what I was beginning to think of as "house arrest."

When Mrs. Simmer sang, this rather odd-looking woman with her bouffant black hair and a distracting wart on her lip was transformed into a guardian archangel. With each high note, Mrs. Simmer held on to the choir loft and practically levitated; with each vibrato low note, her dark eyes smoldered. I marveled that any man, especially just a husband, could keep her housebound. Mrs. Simmer's singing was so heartfelt, so full of longing and sensuality, that everybody, even little children, leaned toward her vibrato. It was acoustic light, full of unseen overtones and mysterious resonance.

We were bewitched. Some bowed their heads and wept openly. Mrs. Simmer's voice was rumored to cure high fevers and help the dying pass to their reward. Most of all, Mrs. Simmer called forth a kind of musical rapture in us. This world was not so heavy, not so hard, when Mrs. Simmer sang.

Her solo, I was firmly convinced, would also heal some of the mentally ill incarcerated at St. Elizabeth's. In the same way that Christ had cast out demons like so many pigs tumbling over a cliff, perhaps Mrs. Simmer's singing would ease psychosis. In any case, those who could not be cured with singing could enjoy our special dessert: Gift of the Magi cupcakes. This was my mother's special recipe: a trinity of chocolate on chocolate on chocolate. It was like the original sin of chocolates -- why else would it be called "devil's food"?

Some of us in the youth choir had sampled the cupcakes en route to St. Elizabeth's and sang out with lips stained dark. Once we arrived, the patients gathered around us in a circle, all dolled up for our visit. When we sang, they nodded and tapped feet like normal folk, and we decided they weren't crazy at all. I suppose we had expected to see people foaming at the mouth or even worse, naked. But the inmates all ate their cupcakes and clapped, just like any polite go-to-church audience.

All that is, except a very small old lady with two bright splotches of rouge on her cheeks that endeared her to me. She peeled her Gift of the Magi cupcakes with delicate white lace gloves and then, smiling, as we belted out the rousing chorus of "Night of Miracles," smashed her cupcake right atop her head.

No one moved. We stopped singing, shocked. And then Mrs. Simmer did something that was so simple. She left the choir and crossed over to the old woman with the cupcake smeared over her silver head. Singing ever so softly -- as if they were the only two people in the whole world -- Mrs. Simmer began her solo, all the while disentangling the gooey chocolate cupcake from the old lady's hair.

The old woman looked up trustingly at Mrs. Simmer. She was not crazy, I saw -- she was a child. Someone had dumped her at St. Elizabeth's because they didn't want to see her return to the incontinence, incoherence, and helplessness of an ancient infant. But was this old woman just being born again, like all the Baptists talked about? Maybe old people have to become babies again to be reborn.

Mrs. Simmer smiled and stroked the old woman's shoulder. She raised her voice to a reassuring mezzo forte. The old lady now gazed up at Mrs. Simmer. What did she see? I wondered. Her long life, her heavenly afterlife? Or did the woman simply hear radiance showering her and see a mother who never stops loving, who will never leave her child?

When I was young and singing to elders, I couldn't quite fathom what might be on these seemingly ancient and far-away minds. Now that I'm closer to being an elder myself, and having sung "Sleep, Holy Child" myself as a solo in memory of that gorgeous voice now gone, I understand why singing in community is such a physical and spiritual communion -- and why singing together can make us happier and healthier.

I also now understand the healing collective power of Mrs. Simmer's solo: We sing because hearing is the first and last human sense; we sing to blend our voices and find harmony in a world so often dissonant and at war; we sing to celebrate and to mourn; we sing to carry on our traditions. And when we sing to those who might be lost, homeless, or wandering, we help them find their way back -- to us and to themselves.

Listen to this story on NPR and hear the lullaby.

Brenda Peterson is the author of 18 books, including the Indie Next "Great Read" I Want to Be Left Behind, from which this story was adapted. Your Life is a Book: How to Craft and Publish Your Memoir, is just published. www.BrendaPetersonBooks.com