At the conclusion of the Unified Relay, the Flame of Hope was handed over to the 2015 Law Enforcement Torch Run for Special Olympics Final Leg Team on Monday, July 13th at the State Capitol in Sacramento, CA where they will travel for 13 days to more than 122 cities and towns throughout California, honoring the spirit of the Special Olympics global movement and delivering a message of hope to communities where people with intellectual disabilities continue to fight for acceptance and inclusion. They will then arrive at the Los Angeles Memorial Coliseum as part of the opening ceremony for the 2015 Special Olympics World Summer games on July 25, 2015.

I was having dinner the evening of July 13th at Ludys Main St. BBQ, in Woodland CA and looked out the window and watched a white charter roll up in front of the restaurant and people wearing red t-shirts piling out of the bus and walking through the doors. My first thought...AHA! this is why the patio was closed off and reserved, it was for this big group coming in. My father's inquiring mind needed to know who they were and we soon found out they were the Law Enforcement Torch Run Final Leg for the Special Olympics team. 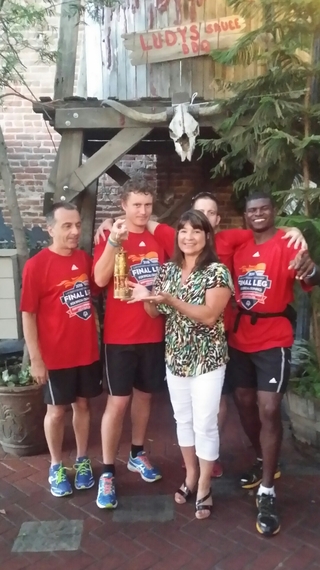 I had the opportunity to meet the guardians of the flame and honor and take a photo with 4 of the 10 runners who have been chosen by their communities to run the flame into the opening ceremony of the Special Olympics Summer World Games. These four boys are from different parts of the world: Jamaica, New Zealand, Pennsylvania, and Italy. I spoke with two of the Directors of the group, Sean Maple and Ronald T. Casalenda, Chief of Police from Wyoming and they patiently and kindly explained the benefits of being part of this dedicated team. They spoke of camaraderie, gratification, and community impact they achieve in all the cities they visit.

They come in as an impressive group and it does make you stop and wonder. Yes, the awareness they will bring to the 122 cities they visit throughout California will certainly make a difference. Their days are long and sleepless, but they do this with a smile and together these two men proudly have been participating and giving back to LETR-finalleg for over twenty years.

The Law Enforcement Torch Run transforms communities by inspiring people to open their minds, to accept and include people with intellectual disabilities, celebrating differences among all people;recognizing and respecting the similarities we all share.