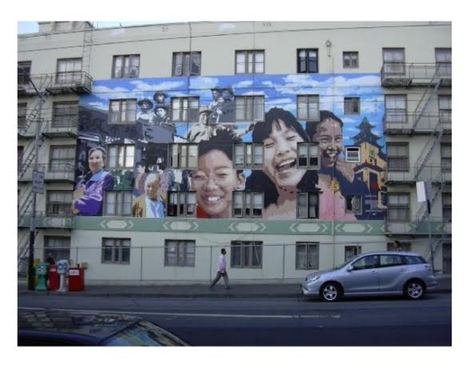 I didn't expect to, but my eyes just kept filling up with tears and suddenly they were drizzling out the side of my eyes. I was standing on the street corner of Oak and Gough in what had been for decades a dangerous and rough part of San Francisco. But slowly the creative class had begun to move in - artists, musicians, people who devoted their lives to preserving old books, small clothing designers and retailers who collected 1950s furniture when people just discarded on the street or gave it to Goodwill. Food artists in the form of chefs had dusted out abandoned storefronts in the neighborhood, chiseling off years of neglect on the windows to try new recipes, new concepts. Many had failed. Some of these pioneers had become the city's new icons.

When I felt the salty water dripping down my cheek I was attending a rally in front of the apartment of close friends. Not behind on their rent, they were days away from being evicted from the place they have called home for 25 years. The landlord was using a provision in a California law, the Ellis Act to kick them out. Suddenly studios in the neighborhood - if you could find them - were renting for as much as $3500/month and property owners were seized by the dollar signs. Many owners had waited years for property value appreciation; others saw an opportunity to do a quick flip.

While evictions tell only a small piece of the story, it's clear that San Francisco has contracted full-blown heart disease. San Francisco lost so much of its talent and spirit from the HIV virus back in the '80s and '90s. It was quietly at first, but now not so quietly, experiencing a new epidemic. Only this time it was caused by something we had all hoped for - an economic virus of success.

People who attended the rally feared for a city losing not just the creative class, but also long-term renters who provide the range of services needed in the city and those in nonprofits protecting people slammed by domestic violence or other social services.

Those secure in their homes, viewing this crisis from afar and trying to be positive suggested, 'How sad, but they could move to Oakland.' Yes, Oakland like Brooklyn in NYC has blossomed as a new center for the creative class in the Bay Area. We should all celebrate the vibrancy of the East Bay. But seeding all the creative and service classes to Oakland is the wrong approach. It would be like carving the heart out of SF.

It might work for football, but not for creativity. The 49ers in August packed their bags and moved 44 miles south to a new stadium, named after an iconic San Francisco company, Levi's. And for less than ten days a year the team plays home games, you can board a train or bus or hop in a car to get there or watch on them on TV. Doesn't work that way for innovation.

A functioning economy needs continuous creativity and innovation and a critical mass of talent paired with a mash-up of different sites, smells, ideas, and interactions - some wanted, some experienced serendipitously and even some that challenge or even offend.

Some tech leaders and local elected officials are pushing for more housing and activists for a moratorium on evictions. However, the spread of this heart disease can't wait. And patience only means more destruction.

The causes and solutions are complex but possible. If only we would bring the same disruptive thinking that homegrown companies like Kiva did to create a new source of funds for lending to poor people in the world raising over $1 million/day; or Levi Strauss brought to market the staple of all wardrobes, blue jeans; or Cisco that invented the gear to power the internet. And the breakthrough solution is likely to be both some of the old ideas repurposed and some brand new ones.

As I stood at the rally, I was reminded of the impatience of Larry Kramer. Upon watching more and more of his friends die of AIDS in the early and mid-eighties and frustrated with the slow response, he wrote a play to bring wider attention to the epidemic. When that didn't seem to generate enough progress, he made many uncomfortable by turning to direct action. While the virus is still claiming new people every year, it is a fraction of what it once was and thousands are thriving despite the disease, because of the innovations impatience drove.

The iconic cable cars or even the Golden Gate Bridge have never been the real heart of San Francisco. For many international cities have architectural icons. The heart of this city is truly it's creative class combined with its working and immigrant classes.

So much more is at stake here, than just housing.