I quiet myself down, take deep breaths and listen to my heart beat. Sometimes the world can seem so chaotic, that only breathing can bring me back to the center of who I am. I move my hand down to the middle of my chest, pausing so that I can feel each beat pump into a steady rhythm. My heart is not my own -- it carries the fight and souls of my family who were gassed to their deaths in the Holocaust, separated from loved ones and the world they once trusted. I don't even know all of their names, but they run through my veins.

It holds the man my grandpa secretly held during a winter march after the man fell down -- and the seconds that passed by without one Nazi noticing the act of kindness. Sometimes I wonder how they didn't give up. They knew their families were murdered, they knew their homes were gone, they knew the world was over, and yet, they chose to believe in my existence, and the existence of their other grandchildren. Where does faith like that come from?

I am not here by chance, I was fought for before anyone even believed I would be in this world. I was loved through the camps, the torture, genocide and the hidden acts of kindness. Their stories are mine, because I am a product of everything they endured, survived, and lived for. I don't take this lightly at all -- I want to do everything in my life possible to make it a better place -- I owe that to them, and to the millions of grandchildren who never had the chance to be born.

I've heard that some people believe that the Holocaust is a story of the past, and that it shouldn't be taught or remembered. They don't see me or my family, and that it still lives on and it always will.

The other thing that they don't see is that the Holocaust is not just a lesson about the Jews or the "other." It's a story of humanity. If we choose to forget, it will happen again, to someone else. We've learned what human nature is capable of. It's not just my story or their story.

Note: I wrote this especially in honor of the International Holocaust Remembrance Day, January 27th, 2015. 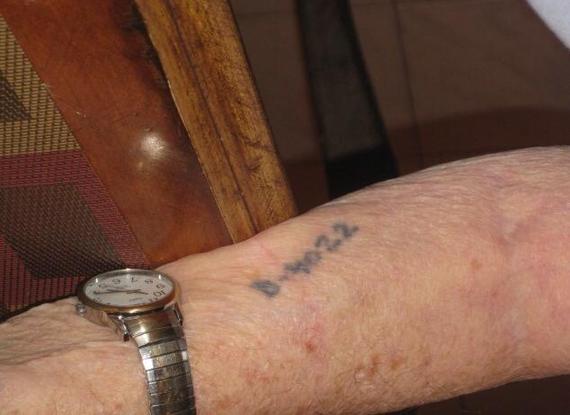 This is a photo of the tattoo from Auschwitz on my grandfather's arm.

This blog was originally published in The Jerusalem Post.

Jess Katz is a Freelance Writer and Graduate Student who is a storyteller at heart.