The Heart of a Surgeon 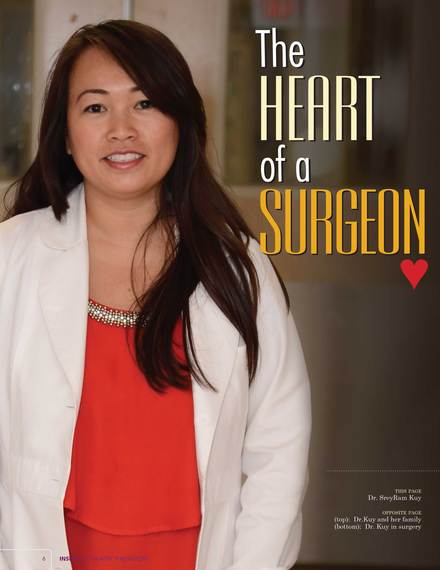 Dr. SreyRam Kuy was recently interview by Sally Croom, Louisiana State University Health Shreveport. This interview was originally published in Inside LSU Health on June 16, 2016 and can be read here

If not for a surgeon in a Cambodian refugee camp, Dr. SreyRam Kuy might not be alive today. Certainly, her mother would not be.

For the past two years, Dr. Kuy has returned the favor, working as a general surgeon at the Overton Brooks Veterans Affairs Medical Center in Shreveport. Some 30 full-time affiliated LSU Health Shreveport faculty members provide care for patients and training for some 70 residents at the VA hospital.

Survivors of the infamous Khmer Rouge Killing Fields, Dr. Kuy's family had just arrived at the aid camp in Thailand two weeks before a devastating grenade attack. It left her with a head wound and nearly detached her left ear. Her older sister, SreyReath, suffered an arm injury, while their mother took the brunt of the blast trying to shield her two daughters. A German surgeon volunteering in the camp operated on the three, saving SreyRam's life and then - against great odds her mother's as well.

Dr. Kuy credits her mother for the happy and successful lives both she and her sister - a podiatrist in Houston - have achieved. The sisters have written a book as a tribute to her, for which they are seeking a publisher. Called The Heart of a Tiger, it tells the story of their mother's fierce love and indomitable courage in the face of one of the worst chapters in history. "I think really, the message of The Heart of a Tiger is, no matter how terrible your circumstances are, don't ever, ever give up. God is truly greater than any situation you face," said Dr. Kuy.

No matter how terrible your circumstances are, don't ever, ever give up

The book is also intended to honor the lives of the millions of Cambodians who died during that horrendous time and who were buried in what became known as the Killing Fields.

The horror began in April 1975, when the Khmer Rouge took over Cambodia, and drove citizens out of their homes at gunpoint, forcing them into the countryside and jungles. "My mom, my father, their infant daughter and my 70 year-old grandmother joined a throng of hundreds of thousands of Cambodians who were driven like cattle on a death march out of the city. They clung to each other, and miraculously, they initially made it to the first of a series of labor camps together," Dr. Kuy recounted.

"This started an apocalyptic nightmare that lasted for four years, during which all the Cambodian citizens were forced to work in slave labor camps, and those who were too weak to work were executed," Dr. Kuy said. Anyone found to have an education was marked for death.

Dr. Kuy's mother was a college-educated teacher in Cambodia and her husband, now deceased, was a mid-level government worker. They had lived a fairly comfortable life in Phnom Penh with their baby daughter, SreyReath. Now they and other educated Cambodians posed as illiterate rice farmers to avoid being killed, struggling to survive years of hard labor and hunger under Pol Pot's regime. At one point, her mother was dragged off by the Khmer Rouge after someone revealed her true background. She used her wits and a Cambodian folk tale to convince the soldiers that they were making a mistake.

They let her go, but others weren't so fortunate. Over four years, two million Cambodians died, either from execution, torture, starvation or disease.

It was during this time, in the spring of 1978, that SreyRam was born in Talien, Cambodia. Her actual birthday is a mystery, since no one had access to calendars. It was miracle in itself that her mother was not killed, as were many pregnant women who could not keep up with the arduous work in the camps. But what kind of life was she bringing this new child into?

"She looked at my sister, then four years old. Instead of a plump cheeked princess, she was not sallow-skinned, sunken eyed with a bloated belly. So when I was born, at the edge of the Killing Fields, my mom wept. It felt cruel to bring another life into this living hell."

The young mother was left to fend for herself, with only the help of her frail mother. By then, her husband had been sent to a re-education camp, many miles away from Talien. (Re-education was a euphemism for brutal beatings and savage slave labor.) "There was not hope in sight that the nightmare would end," her mother later told her.

She did anything she could to stay alive to care for her children. After working all day at forced labor, she crept into the jungles to forage for food for her daughters and elderly mother.

"One time, she was digging for wild bamboo shoots and stumbled upon a litter of tiger cubs in the jungle. Terrified, she ran for her life to escape the mamma tiger, which she was certain was nearby. But arriving back at the hut empty-handed, she mustered up her courage, then returned to the jungle to pick more wild bamboo shoots," according to the family story.

Says Dr. Kuy: "To me, that is truly heroic. But, my mother now laughingly says, 'I wasn't fearless. I was just hungry."

On January 7, 1979, the Khmer Rouge were overthrown in the capital city of Phnom Penh. It took about a month for the news of the liberation to reach the jungles of Talien. "It seemed unbelievable," said Dr. Kuy.

However, even though they were free, the family had absolutely nothing. The city had been destroyed. "Our home in Phnom Penh was gone, and our family farmland had been taken over by squatters," Dr. Kuy reported. Realizing there was no chance for any future there, Dr. Kuy's mother took her two and six-year old and fled Cambodia in 1980.

Walking for days through the jungles, side stepping land mines and hiding from the border patrol, they joined hundreds of thousands of illegal, unwanted immigrants, finally reaching a refugee camp. The rocket-propelled grenade that landed in their camp, nearly killing them, had been intentionally aimed at another set of refugees trying to cross the border.

Dr. Kuy is still amazed that the surgeon who saved her wounded family would leave his comfortable home and his family to work in a squalid refugee camp, helping people who don't look like him add have nothing to give back.

"That is really what it means to have compassion," she believes.

After living in for different refugee camps, Dr. Kuy and her family were able to get visas with the help of an American Christian missionary and ended up in Corvallis, Oregon. Her mother took menial jobs cleaning hospital rooms and second jobs cleaning doctors' houses and working in a thrift shop to support them.


My mom often tells me how proud she is to be an American, and how astonished she is by the kindness of Americans

"My mom was so proud to have the opportunity to work, to live without fear, and to have freedom. She often tells me how proud she is to be an American, and how astonished she is by the kindness of Americans," Dr. Kuy said.

She compares her story to that of the thousands of refugees fleeing Syria today.

"I'm not a politician. I'm not a legal scholar and there's a great deal I don't know about politics and global affairs. I'm just a surgeon. What I do know is that I was once a refugee myself. And I am so grateful to this country for opening its doors to my family and me. We fled a genocide, survived a bombing in the refugee camps, and we had absolutely nothing. We were destitute, didn't speak English, and had absolutely nothing to offer. And yet, I thank God that we were given the opportunity to come to America. I am so proud to be an American, and so grateful for the compassion of the American people."

We were destitute, didn't speak English, and had absolutely nothing to offer.

Dr. Kuy was awarded the Gerald E. Bruce Community Service Leadership Award from the Ford Family Foundation, which is given for unselfish initiatives taken professionally and civically for the betterment of their communities. She was honored for the work she has done with veterans and healthcare. The award comes with a $5,000 grant, which Dr. Kuy has chosen to be given to an organization that serves veterans. "I'm inspired by people, like Jay Leno and JJ Abrams, who use their talents and skills, to shine the light on the tremendous need among veterans."

I don't even know his name, but because of him I'm alive today. And, as surgeon myself, caring for US veterans, I'm reminded what a privilege it is to care for the people who fought for the freedoms I treasure.

Dr. Kuy often thinks about that surgeon who volunteered to work in the Cambodian camps. "I don't even know his name, but because of him I'm alive today. And, as surgeon myself, caring for US veterans, I'm reminded what a privilege it is to care for the people who fought for the freedoms I treasure." 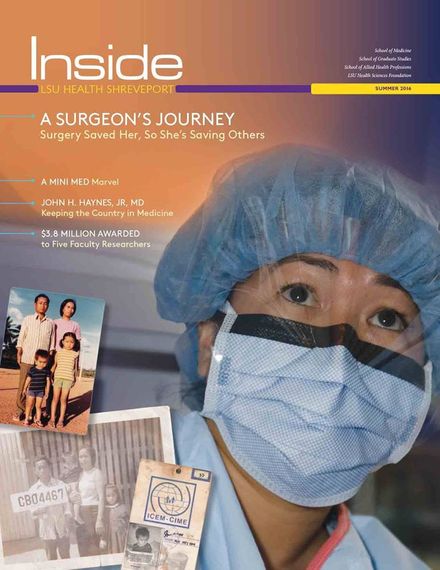