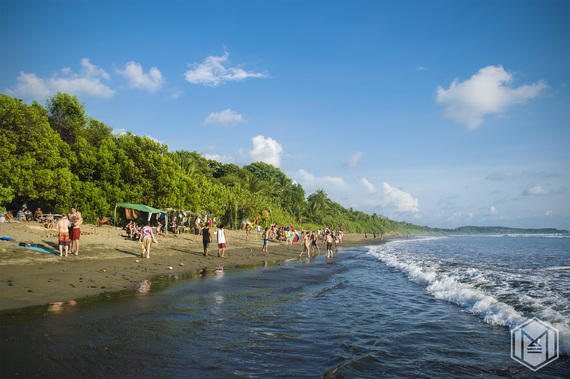 There exists a realm called Envision, betwixt beach and jungle it lies,
Created with care and precision, for bright and curious eyes.
The moment you pass through its gates, under blue skies draped in white lace,
A world of adventure awaits, full of peace, love, and bass.

To step into the threshold of Envision Festival is to take a leap of faith. The journey required to arrive there is one riddled with challenges that the thousands of flocking patrons affectionately embrace. There are many aspects that make Envision special but the beacon that shines the brightest, as always, is Mother Nature. Set within the quiet jungle community of Uvita, hidden from sight by a verdant layer of forest, lies Envision with the vast Pacific Ocean cuddling up next to its perimeter. The biophony of the forest's creatures and the geophony of the trees and sea accompany the musicians on stage.

The setup was similar to last year, however a few changes and improvements were made. The yoga area was expanded and the Lotus Stage changed its name to the Lapa Stage, a grander version of the humble Lotus. Being the only stage playing music during the day, the Lapa was home to all the house, techno and psy-trance you could handle, blaring pulsating beats that could be heard from the beach. There was a musical progression on the Lapa as the daytime DJs played funky beats often incorporating classic tracks like Stevie Nicks' "Edge of Seventeen" or Ella Fitzgerald's "When I Get Low, I Get High." As the day transitioned to night, the BPMs increased and house music began to bump its way into the Lapa. Into the deeper night, through the wee hours of the morning, psy-trance overtook the Lapa in one final burst of wild, flailing sound. Artists such as Cats Pajamas, IrieEyes, Zach Walker, M.A.N.D.Y., Lee Reynolds, Tara Brooks, and Nicefingers graced the Lapa. 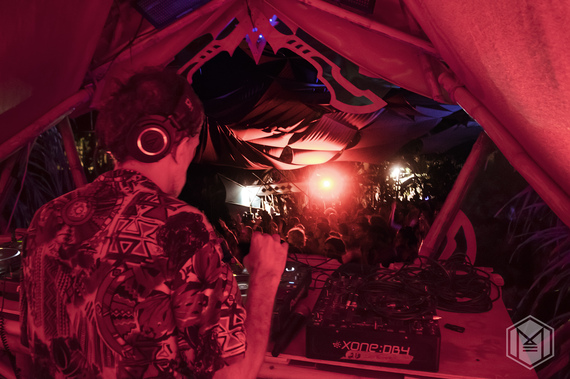 The Village Stage, which was nestled by the campgrounds, hosted a combination of music, meditation and speakers. Definitely the most intimate of the four stages, The Village was a place of serenity and education. Artists, such as David Block of the Human Experience, offered up their sounds while inspirational speakers, such as Envision founder Stephen Brooks, shared their knowledge. The Village Witches stage was situated by the food vendors where you could overhear speakers sharing psychedelic stories about Terence McKenna whilst you munched happily on your vegan Luv Burger.

The Sol Stage hosted a wide array of genres, mostly of the instrumental varieties. Its elaborate, laser cut facade was adorned with a jolly, mustached sun whose Technicolor facial expressions morphed with precise 3D mapping. The stage itself was a sober acid trip as the colorful projections created remarkable designs that twinkled and moved across the wood. On Sunday night, the sound of the melodica echoed through the air as Oakland-based band Dirtwire (half of which is David Satori from Beats Antique) performed the aptly titled song, "Mueve En El Sol," which has become the unofficial song of Envision, already finding its way into a few post-event videos. From the worldly sounds of Beats Antique to local Costa Rican reggae group, Un Rojo to the folk ensemble Elephant Revival, The Sol Stage was the place to go to experience music the good ol' fashioned way. 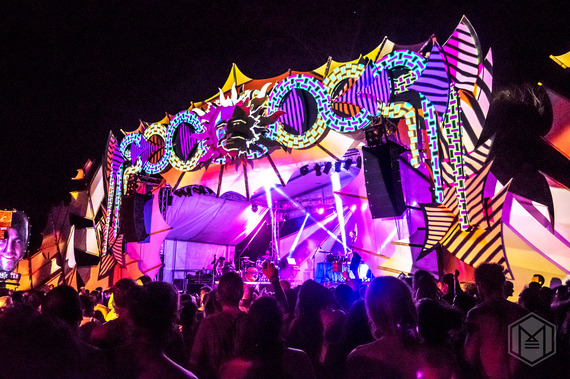 The Luna Stage spewed bass out of Funktion One speakers and fire out of its antennae while also being the home to the festival's sunrise sets. Cut into the shape of a moth, this nocturnal butterfly was the canvas for kaleidoscopic projections that swirled and glowed until the sun came up. With aerial acrobats, dancers, hoopers and fire-spinners adorning the stage, the Luna was a vision of splendor that displayed the deepest corners of the human imagination. 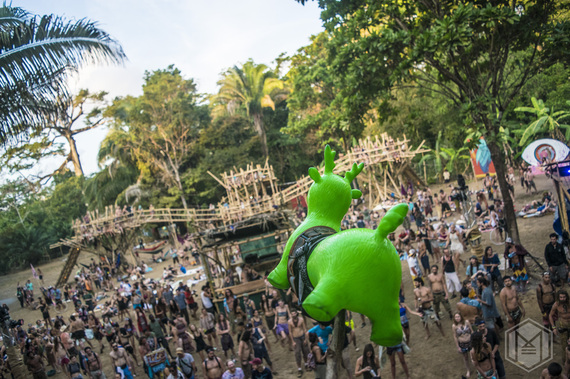 Artists such as Lafa Taylor, Beat Fatigue, Andreilien, Hedflux, Medium Troy, An-Ten-Nae, Cualli, Digital Rust, and Shpongle lured patrons to the Luna with various boops, bleeps, womps, clicks, dribbles, drips, rhymes and flows. Even Patty Partymuch, the lime green reindeer made an appearance atop the stage. Envision veteran Random Rab welcomed in Sunday morning with his 5th Envision sunrise set. The most epic consecutive run of artists at the Luna, however, was the Sunday night finale with Nominus, Dimond Saints, Clozee, Grouch, Atyya, Spoonbill and finally, The Human Experience, performing the grand finale and closing out the festival. The gut wiggling music combined with being intoxicated by the leave-it-all-on-the-dancefloor energy that surrounds the last night of a festival made the air come alive with bliss. 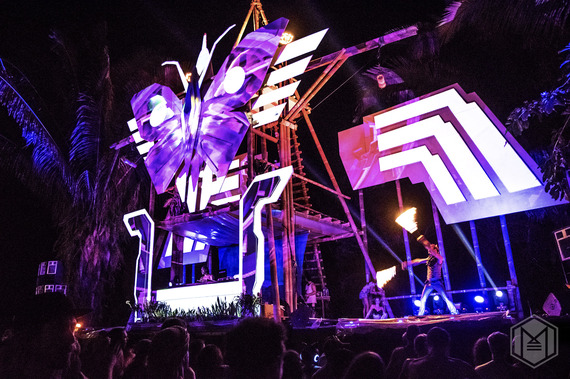 The Envision Art Gallery could also be found in this area along the back perimeter featuring the work of visionary artists from past and present. Live artists such as Lucas Rodriguez were sprinkled throughout the festival, caressing canvases upon bamboo easels. One of the grandest and most memorable live art pieces was the giant mural painted by Oakland-based street artist, Ernest Doty. His piece was captivating and mysterious, a faceless humanoid swathed in rainbow. 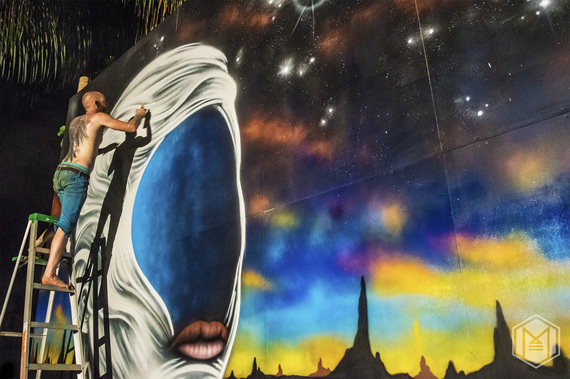 Envision is a haven of creation, inspiring love through music, dance, yoga, art, healthy living and sustainability. As amazing as the festival is, what is even more amazing is its organizers. With all beauty comes imperfection and with all journeys come challenges. Costa Rica is a predominantly Catholic country and on Saturday there was an anti-Envision protest organized by a local church. "We met them with understanding and acceptance. We offered fruit and water to the protesters and they were extremely nice and politely declined," Justin Brothers explained. "It's understandable why an extremely Catholic establishment may be afraid of Envision and what we're bringing to their community but at the end of the day we actually all have common viewpoints on community and love." 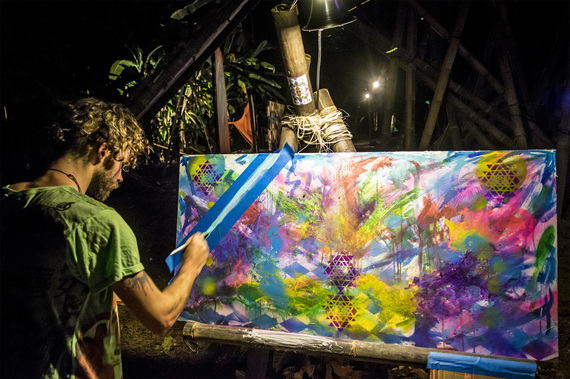 Another challenge that Envision faces every year is safe transport from the festival to the local communities at which many attendees booked hotels. All the local cabs, including those from Dominical and Uvita, are a part of the department of transportation which runs out of San Isidro. The purpose of this system is to prevent patrons from jumping into random, unaccounted for vehicles. "The local cabs have the same opportunity to be a part of the system that we've enacted," says Brothers. "We want nothing more than all Uvita and Dominical based businesses to thrive and succeed from Envision's presence but we also need to put systems in place that standardize and protect everyone involved."

From a local's standpoint, I can understand how it may be difficult when thousands of counter-culture expats flood into your town. However, one of the transformational festival's strongest foundations is acceptance. The festival community exists because we all found a place where we are not seen as outcasts but embraced as family. The organizers of Envision work every year to strengthen the community in which the festival sits. In 2013, they donated money towards the construction of a sidewalk along the dangerous jungle roads, where many hitchhike and walk unsafely. 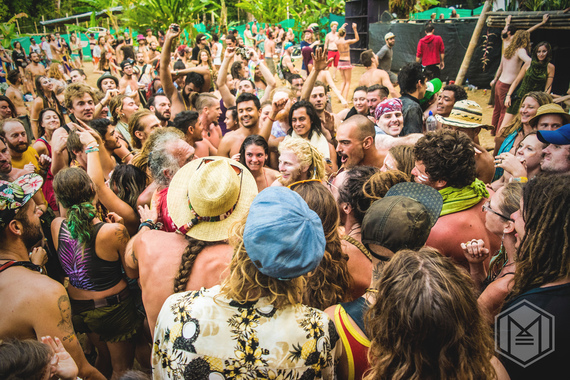 They have also upgraded the water system over several years, given computers to the local school, donated to the police station, and this year they started a youth center in Uvita that they have handed over to the youth to run and plan to support into the future. "We really wanted to put it in their hands so it wasn't an Envision thing but something supported by the community and for the community," Brothers voiced. "It's a great opportunity for anyone interested to explore entrepreneurship and project development. We're excited to see what direction the youth center takes and we're here to support it throughout."

Though no festival is perfect, Envision Festival is quite close. Even torrential downpours and stomach viruses could not dampen the spirits of the Envisionaries. Definitely one of the most physically, mentally, and emotionally taxing festivals, it is these challenges that make Envision's patrons so special. The jungle teaches patience, the ocean teaches respect, and the festival teaches love.

There is something so enchanting about the final sunrise set. It is a time when festival warriors can conjure the spirit to dance so hard that the sun decides to ditch his party and join us on our side of the hemisphere. As night transitions to day, a magical sense of freedom and gratitude sweeps across the dancefloor as we warmly welcome the most glorious Monday morning. My Envision festival ended with a giant group hug, celebrating those who were left standing, on the dancefloor and on the stage, as a cart offering free fruit was pushed through the crowd. It was a sweet ending to a decadent weekend.