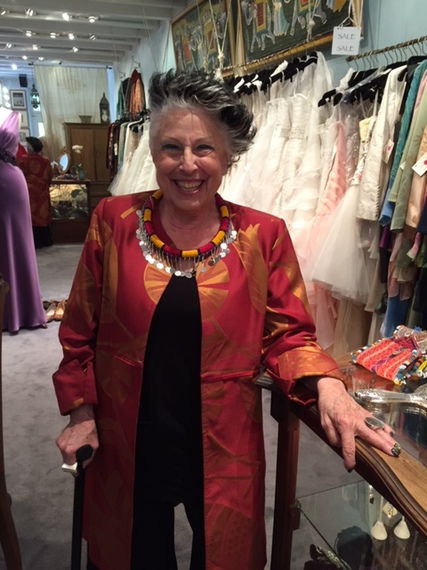 Life in the Boomer Lane has just returned from Santa Fe. Having been there many years ago, she was eagerly anticipating the art, the food, the vistas, the laid back vibe, and the magical mix of Indian/Latino/Caucasian culture. She will bypass all of this to tell her readers about some of the extraordinary people she met under the most ordinary of circumstances, in the shops and galleries she visited. These people, whether born in Santa Fe or in New York City or in any other place in the country, have chosen to make Santa Fe their home. These people are the heart of Santa Fe.

Norma, the sales clerk, appeared as a vision, in the first store LBL and her friend, Sandy, entered. LBL is a huge fan of the blog Advanced Style, and Norma looked like she had stepped from the blog directly into LBL's line of vision. From a long career as an artist and designer, Norma and her husband settled in Santa Fe, to soak in the arts and the culture, and to inspire whoever might cross her path. LBL told her she would write about her in her blog, and so she needed Norma's last name. Norma asked, "Which last name? I have two." LBL has now looked up both of her last names (Andraud and Sharon), and it turns out she is well-known with either. One is her art work, the other her fashion design. She doesn't have an inspiration website, but she should. She is a master at that.

*****
LBL and Sandy asked Norma where they should eat, and her first suggestion was a restaurant called The Shed, right near the main plaza. They went there for dinner, and the place was packed. The hostess suggested that they stand at the bar, and, if seats were available, could be served there. In awhile, they did get seats at the bar, next to three people who were already eating. LBL, being polite, smiled and introduced herself and asked them where they were from. The married couple was from Austin, TX, their friend from Oklahoma. The woman from Austin was a Methodist minister, here in Santa Fe to officiate at a wedding.

After awhile, LBL, again simply being polite, leaned over and commented to the husband how lucky is wife was to be officiating in Santa Fe. She asked him if the bride and groom were paying their way. His answer was, "It's a groom and groom, and no. The church doesn't allow my wife to marry same sex couples, so we have come here so that my wife can officiate until the last sentence that says, "I now pronounce you..." She will leave that sentence out. In that moment, all of LBL's preconceived notions about these people flew out the window. She said to the husband, "Soon, there will be no such thing as same-sex marriage. There will simply be marriage." He shook his head and answered, "Amen to that."
*****

Kathleen Piccione was seated at a desk in Gallery One, one of the 300 art galleries and studios that wind their way up the legendary Canyon Road, Santa Fe's most famous street. Kathleen is sweet, she is welcoming, she is beautiful. She is a vision of young, artsy-looking Santa Fe. LBL thought how lucky she must be to have a job that surrounds her with such beautiful art, until she asked Kathleen who the artist was. It was Kathleen, herself. The work was hers, as well as the gallery. Originally from Wisconsin, Kathleen is largely self-taught. She pointed to a stunning portrait of a young Indian girl. Kathleen found the girl at a powwow, painted her, and has now entered the painting in an international art competition. You can see her work on her website and the painting she has entered at Art Prize 2015. 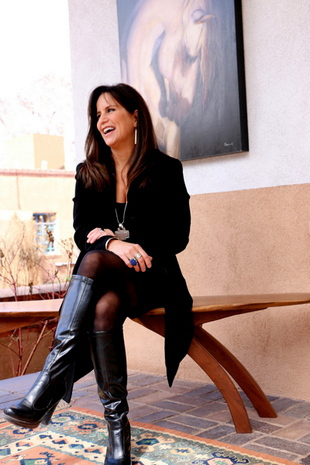 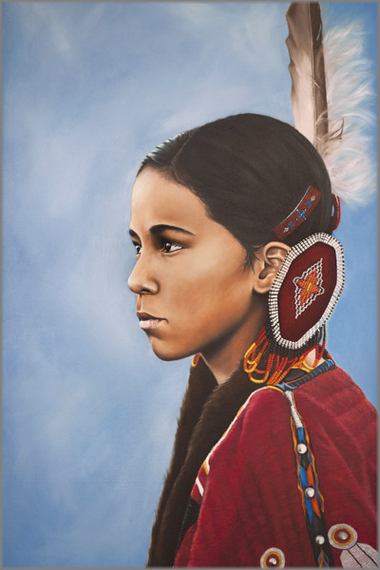 *****
The Railroad District is a part of Santa Fe that, until some years ago, was simply, well, the railroad staging area. Gradually, young artists and gallery owners began to buy up the cheap spaces that surrounded the tracks. Now, the area is filled with galleries, shops, and the Santa Fe Farmers Market. One of the galleries LBL and Sandy went into was owned by a sculptor, Joyce Stolaroff, who bought the cavernous space to start a gallery some years ago. Joyce sculpts dogs: big, black dogs. They were all over the place. They were beautiful, scary, intimidating, friendly, depending on one's belief system about big, black dogs. This is what Joyce had to say:

"Did you know that black dogs are euthanized at a much higher rate in shelters than any other kind of dog? But the few black dogs that are adopted go on to live lives in which they are loved, cared for, valued. I think about this all the time. What makes one dog a throwaway and another an object of love? It's like what makes one person a throwaway and another an object of love? So I create most of the dogs like the ones you see here, the ones that never make it. Then, I make a few that are gilded. These are the lucky ones, the ones who are deemed precious." Her words stayed with LBL long after she left the gallery.

Joyce works tirelessly for the dignity of all dogs. She uses her art for fundraising events and is constantly trying to raise people's awareness. You can see Joyce's work and feel her passion at Wheelhouse Art Gallery. 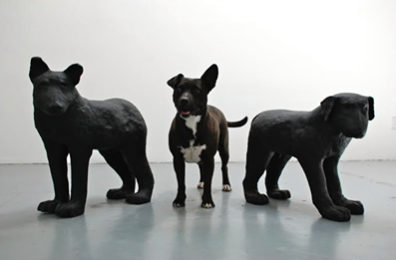 *****
The William Siegal Gallery is a huge, slick, contemporary art gallery on the outskirts of the Railroad District. By the time LBL and her friend entered it, they were becoming brain-dead from art overload. But there, amid the huge contemporary works of art, were the "Retablos" of Victor Huaman Guitierrez, a self-taught folk artist from Peru.

Guitierrez is 38-years-old and has always lived in the place he was born, a remote village in the Central Highlands of Peru. His journey as an artist began at the age of eleven when he saw a Retablo for the first time. Retablos are a key part of the Peruvian culture and originally served as religious shrines, but have evolved to include depictions of secular scenes of daily life and traditional events. Victor has since dedicated himself to this ancient art form that originated in the nearby town of Ayacucho.

Guitierrez is one of fifteen siblings, seven of whom died at an early age due to malnutrition and other hardships of living in extreme poverty. To this day, as a result of these harsh conditions, he is ill at ease with much of adult life. He has a singular manner of speaking, is unusually shy and sheltered for his age, often struggling to fit in. He lives in the village of Quinua with his now elderly parents, in a rustic adobe house with no indoor plumbing. He works in almost complete isolation, in a small corner of his home reserved as his "studio", surrounded by the clutter of family belongings. His materials include a local brand of children's water color paints, a variety of odds and ends he finds on his daily walks and brushes he makes from hair that is either his own or that of the cat, burro or goat.

What astonished LBL about Guiterrez' Retablos was the cultural perspective they are drawn upon. Guiterrez, whose only perspective would seem to be defined by his tiny village, instead makes artistic statements that are more indicative of world-traveled and highly educated individuals. It would be like someone growing up without a piano, sitting down one day in a music store, and beginning to play Mozart.

Gallery Director Eric Garduno told LBL that Guiterrez was actually in Santa Fe that very week to participate in the huge, annual Santa Fe International Folk Art Market, that draws artists and collectors from all over the world. Because the William Siegal Gallery carried Guiterrez' work (the only folk art they have ever carried), they were hosting him. This was his first time out of Peru.

"For the last couple days, we have been doing fork training," Eric said. Thinking this was a new art form, LBL asked him to explain. "Victor has never used a fork to eat. We thought he should know how to do that, for all the events that will take place this weekend." 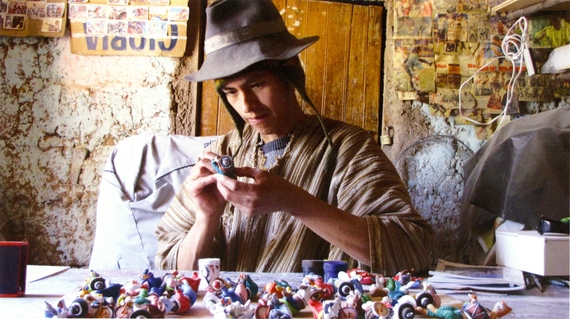 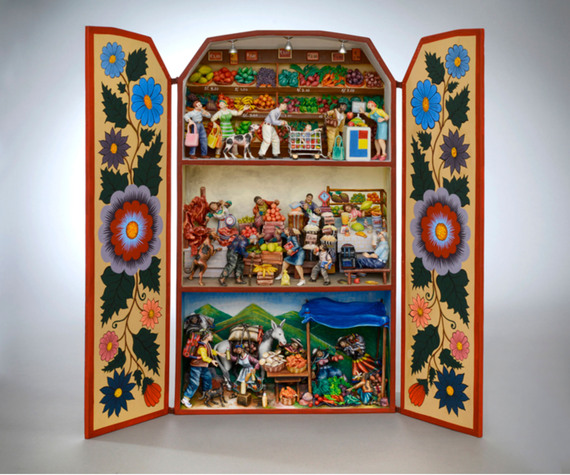