This is the second in a series of posts about putting on Rogers and Hammerstein's classic musical The King and I with a cast and crew of Black and Latino youth at Bronx Prep Charter School. 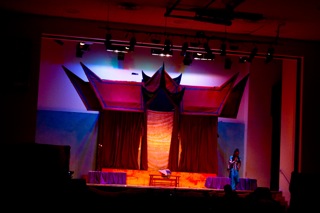 in the South Bronx. A group of high school students and I have just put the finishing touches on an 18-foot Thai temple that has been growing on the small makeshift stage over the last few weeks--the centerpiece of the set for our production The King and I. We're 10 days from opening night and the late-night vibe in the gym is flipping erratically between exhilaration and exhaustion, panic and hope. The rehearsal and construction process has lasted 5 months, involving nearly 150 actors, singers, dancers, designers, musicians and builders spanning grades 5-12, not to mention countless family members, teachers, administrators and friends. We've worked hard, but there's still an overwhelming to-do list to tackle. The kids are tired. I am, too.

Actually, I'm more than tired. I'm beat. Much as I love Bronx Prep, I'm wondering if I have it in me to come back next year. With a small daughter at home and my own artistic projects on the back burner, why am I commuting from Brooklyn to the Bronx and back each day? And why am I hanging out in a school gym on a Friday night when I could be eating sushi with the handsome husband I barely ever see anymore? Compelling inquiry. But the soul-searching will have to wait. Right now we have a show to put on.

The small group that has stayed with me to work tonight is comprised mostly of seniors, kids I've been teaching since my first year at the school. They were in 6th grade when we met. Now they're off to college in a few months. 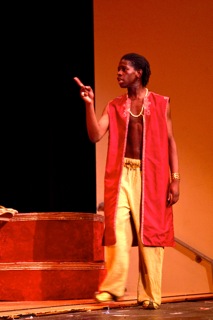 We drop our paint brushes and sit back to survey our work. Then Chris, the 12th grader who plays the King, abruptly pulls off his paint-splattered bandana, rakes his hands through his dreds, and walks out of the gym.

Chris Moncrief is hands-down the most talented young actor I've ever worked with. He's also one of the most challenging. Brilliant, magnetic and generous of spirit, yet also headstrong and sharp-tongued, Chris has forced me out of my comfort zone as a teacher more times than I care to admit. In fact, just that same day in the thick of an intense and difficult rehearsal, his sarcasm cut me to the core. We were choreographing a scene that involved the whole 65-member cast, including a huge chorus of 5th and 6th graders whose attention spans had been stretched to the limit. When Chris heaved a frustrated sigh and rolled his eyes at their lack of focus, I told him quietly that now was the time to step up as a leader and stay positive. Chris exploded. "Oh, I'm SORRY, Ms. Q," he snapped, his face distorting into a grotesque fake smile. "You want me to be HAPPY? Oh, OK. NO PROBLEM. I'll be HAPPY." He smirked and did a jazzy little dance into his position.

At any other moment, I probably would've maintained my cool, resolved to find a time to deal with Chris privately, and kept things moving. In my years of teaching teenagers, I've learned not to take their 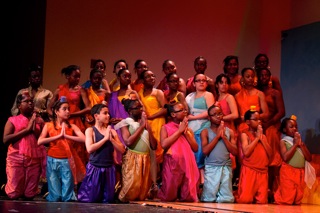 outbursts personally. I don't make excuses for disrespect, but I do acknowledge the intense pressures our kids deal with. In Chris's case there's even more heaped on. I get how hard it must be for a kid who's struggled with authority to be playing a powerful monarch, for a young man who's grown up without a dad to be playing father to dozens of Siamese children. But in this moment, I'm tired and vulnerable. One tiny tug is all it takes to unravel years of accumulated wisdom and calm. What happens next hasn't happened to me since my second week of teaching in the South Bronx. I start to cry. Right there, in front of 65 kids.

I keep directing. The kids are quiet now, bewildered at the spectacle of their teacher swiping snot off her nose with her sleeves. We take it from the top. I focus on breathing. 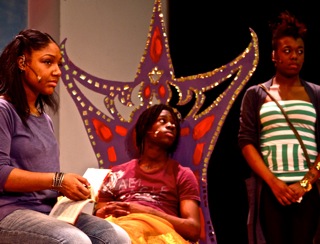 But I feel like I've been kicked in the gut. Because the perversely simple answer to Chris's cutting, sardonic question is "Yes." Yes, in this moment, all I want--in fact, the only possible reason I can come up with for doing any of this, for making this ridiculous commute, for leaving my kid with the sitter each day, for choosing rehearsal over date night--is that I want Chris to be happy. I want them all to be really, deeply happy. And I want to be happy, in that specific way that only shared creative work makes possible. I want these kids to trust that art makes this feeling of happiness and flow available, to trust how fun it can be, how freeing. But it doesn't feel fun or freeing right now. Right now, it sucks.

I'm still feeling raw and hurt when Chris announces he is going to stay late and work with us after rehearsal. Rather than giving him credit for sacrificing his Friday night to sponge-paint a temple in the 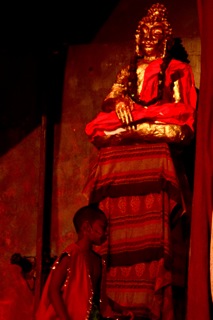 school gym, I spend the evening on the lookout for a private moment to wring an apology out of him. As it turns out, he beats me to the punch. Well, almost.

Chris returns to the gym carrying a massive golden Buddha statue created for the play by our high school art students. After placing it in the center doorway of the temple, he comes to the back of the gym and sits down beside me. The rest of the kids have started cleaning up. Chris and I sit without speaking. Through the open door, the sounds of the neighborhood drift in. Bass blasts out of car speakers and teenagers scream. Punches are thrown, obscenities shouted. Sirens.

Taking a deep breath, Chris gestures at the stage. "It looks good, Ms. Q," he says. I nod. Silence. He looks over at me. "Hey, if I ever got a tattoo, you know what quote I'd use?" I shake my head at his non sequitur. "It's from the Quakers," he starts. "I've always liked it. But now I really get it, you know? It simple, but it's deep. It says, 'Work is love made visible.'" I turn and look at him. He grins and looks down. "Y-y-y-y-yo," he says, pointing to the goose bumps on his arms.

Yo, indeed. I try not to smile, and fail. Then I punch Chris on the shoulder, a little bit harder than I'd intended. "That's for making me cry, punk."

It wasn't the direct apology I was hoping for, but that moment in the back of the gym was the start of a huge wave of fresh momentum, for Chris, for the production, and for me. Throughout the last ten days of rehearsals, Chris stepped up and led. 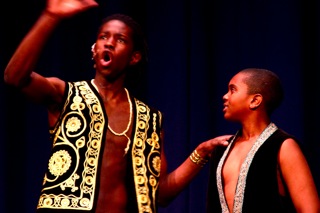 Wild coincidences started cropping up, including an email from an amazing woman named Phyllis Lerner, an education professor who had read about our production while volunteering at a Thai refugee camp and who came from DC to see the show and speak to the cast and crew about the links between the play, life in the camps and the realities of urban America. Cast members started making connections between their lives, the lives of their characters and the lives of real young people half a world away. Kids who had never even come to one of our shows before started lurking around rehearsals to ask me about auditioning for the next one.

On the last night of the run, I was walking with a giddy, jubilant crowd to the cafeteria for the cast party when I suddenly looked up to find Chris Moncrief lurching toward me, his face shining with tears. Without a word, he wrapped his long arms around me and collapsed, sobbing bodily. We stayed like that for a long time, surrounded by kids and their friends and families. Then he finally took a breath and pulled back his lanky torso. He tried to speak and couldn't. I took the sides of his head in my hands and said, "OK, dude... let's get one thing straight. The next show we do together--because we WILL do another show together someday--you are going to make choices and I am going to TRUST YOU, and I am going to make choices and you are going to TRUST ME. You got it?" The classic Moncrief smile spread slowly across his face and then quivered as a fresh wave of tears hit. He bit his lips, closed his eyes and shook his head, breathing hard. "Yeah," he said, wiping wetness off his face with the heels of his hands. "Deal." The kids responded with a whooping cheer 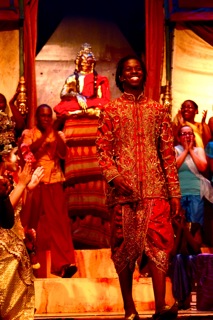 and Chris looked up to find himself surrounded by wide-eyed middle schoolers. His face snapped into a deadpan stare. "What, you never seen a King cry before?" The kids laughed. "Q, I gotta get myself together," he said. "I'll see you at the cast party." Then, just as he had on stage, he waved his hands to scatter the mob of kids, who parted to clear a path for him.

And at that moment I started thinking about next year's show. 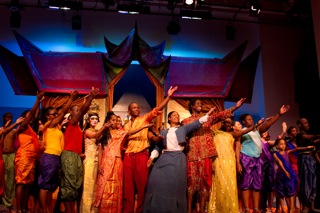