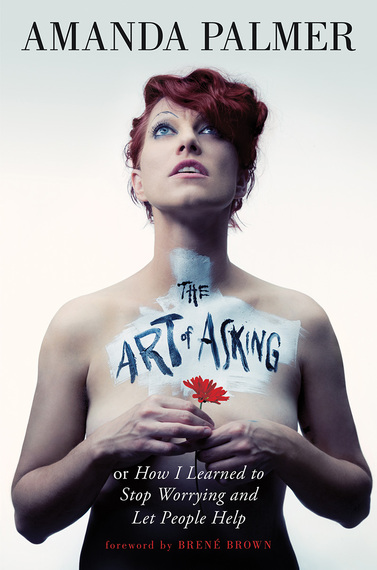 Part artist manifesto, part confessional, part feminist memoir: Amanda Palmer's The Art of Asking, or How I Learned to Stop Worrying and Let People Help is a thoughtful treatise on the spectrum of giving and receiving help from others, in whatever shape that may take.

For those who don't know, Amanda "Queen of Kickstarter" Palmer holds the record for the largest music Kickstarter ever achieved, and her now-iconic TED talk on the topic of her book has millions of views around the world. She's also married to (beloved) author Neil Gaiman, the person who first "introduced" me to Amanda's music and writing back in 2009.

[Full disclosure: I was one of 24,883 contributors to Amanda's historic Kickstarter. It was the first album of hers I ever bought.]

An ongoing joke between my husband and I for the last five or so years has been whether or not I'll do a Kickstarter for my future novels. Every time someone I know or follow has a successful campaign, I log in to my account and tweak my project.

But I've never made it as far as the submit button.

I tell myself it's because the logistics of delivering rewards is incredibly daunting, self-promotion makes my stomach turn and I wonder what emotional fallout I'd live with if my Kickstarter failed.

However the real reason became clear while reading The Art of Asking: I'm uncomfortable asking people for help, and more so asking for money, even if it's to give someone something they already want, like my book or artwork. Amanda's words unlocked the root of this trouble.

Due to a series of generational behaviors and ancestral traumas in my family, the act of asking -- and especially asking for money -- was an exercise in displays of power, withholding, and ritualized guilt trips that went on for the majority of my young and adult life.

After years of training, asking became an exercise of abject humiliation: an open admission to another person that I have no power over my own life. I am not in control.

And through global reactions to Amanda Palmer's TED talk detailed in The Art of Asking, I found out I wasn't alone.

Many people have difficulties asking for and accepting help.

Reading those words I found myself crying. And I cried all the way through this incredibly resonant book -- sometimes even while laughing (cryphing?), Gilmore Girls-style. Amanda can sure turn a phrase.

Looking back at my life, it seemed that no matter how independent I felt I always still needed help -- a walk home, a ride, a shoulder to cry on, advice, money -- and because in my world asking equaled shame, it meant I was a failure.

Asking was such a regularly humiliating experience I began to feel empowered when people would offer to help and I would turn them down, insisting on doing it myself.

After Amanda's book, I began cataloging lost opportunities to collaborate with people who wanted to support me and my art. I took stock of all the times I was so tired of asking for help -- so tired of NEEDING help at all -- I suffered in silence, spiraling into depressions and worse.

Reading The Art of Asking, I finally understood that requiring help is a fundamental part of life. Nobody is an island. Not even Henry David Thoreau in his mythical Walden.

One of my favorite anecdotes in Amanda's manuscript is when she talks about how while our image of Thoreau is of an austere man surviving out in the wild, actually the house he lived in belonged to (his good friend) Ralph Waldo Emerson, and once a week his mother and sister would bring him fresh-baked bread and pastries.

The man who wrote "I went to the woods because I wished to live deliberately, to front only the essential facts of life," and "I wanted to live deep and suck out all the marrow of life, to live so sturdily and Spartan-like as to put to rout all that was not life," received a family care package each week that included donuts. Priceless.

Was he ashamed for these creature comforts provided by his loved ones? Doubtful. Because being ashamed of needing help is like being embarrassed to breathe.

Further, when someone asks for our help do we judge them? No, we do what we can and hope we can be of service.

As Amanda writes, needing and asking for help is not a sign of weakness, but rather an opportunity to build community. And that's just what Amanda has done with her incredibly generous legion of fans.

At the moment, there's a website where people who can't afford her book post their details and those who can are gifting copies of it. Amanda Palmer plays many roles, and intermediary is a major one.

Since she herself doesn't have a problem asking, ultimately I felt The Art of Asking is not about how Amanda Palmer stopped worrying and let people help: It's about how she stopped worrying about what others would think if she asked for, and accepted, her husband's help. So much of this book was watching Amanda come to terms with her self as a wife, prioritizing her relationship, and finally give in to the intimate exchanges that come with true partnership.

The Art of Asking is beautifully written, revelatory, and timely. The portrait of a former living statue turned rock star turned writer revealed as often-fallibly human. It's a love letter to the power of friendship and in some ways a starter how-to for developing empathy.

It's a marvelously honest work to behold and for the first time in years I was sad to finish a book; I would have happily stayed in Amanda's world for hundreds more pages.

While The Art of Asking details the experiences of an artist and musician -- and especially resonates with other creative types -- the book is also relevant as a teaching tool for educators, activists, therapists, academics and others.

In the wake of recent lacks of indictments in the Michael Brown and Eric Garner cases, hundreds of thousands of people have taken to the streets no longer merely asking for change, but demanding it.

Amanda's succinct breakdown of the politics of asking quoted above is a particularly fitting message to police, lawmakers and other powers that be:

We have the power to help each other and rebuild a sense of community in this country if we can take shame and condescension out of the human rights equation.

Asking doesn't signify weakness, and neither do displays of vulnerability, whether that be crying in public, revealing your darkest traumas, or standing in the middle of a crowd naked as Amanda often does and trusting them not to hurt you. Quite the opposite, in fact.

I've also come to understand that Kickstarter is not a place to busk or beg online. Rather, it's an opportunity for those interested to buy creative work from its creator directly, instead of going through a corporate middleman. It's the online equivalent of a brick-and-mortar store or small business instead of a global chain. In that sense, it's revolutionary in the corporate culture context in which we live.

And when it comes to help, I won't anymore believe I have nothing to offer in exchange: even if the helper doesn't directly benefit from my creative work, someone, somewhere will.

So, thank you, Amanda F. Palmer. From now on I will take the donuts when offered. And I'll enjoy the hell out of them, shame-free.

What parts of "The Art of Asking" resonated with you? Please feel free to share in the comments below.