Around the world our cities are in desperate need of rejuvenation and transformation. Elected officials are scrambling to equip their cities for the 21st century, talking about creating "open," "networked," and "smart" cities.

The problems are legion. Mexico City is now one of the most dangerous cities in the world. Megacities such as Sao Paulo and Johannesburg are straining to the point of paralysis from population influx, lack of infrastructure, traffic congestion, pollution and crime.

Many cities in the United States grew rapidly after World War II, but now have dysfunctional urban centers. By separating where we live, work and shop, cities have been divided into downtowns that become ghost towns at night, suburbia where the commute is brutal and the mall where a car is required for all shopping. Detroit has lost more than half of its population and large parts of the city have become a wasteland, populated by wild animals. The median house price is under $10,000.

Fortunately the digital revolution provides a powerful new platform for the transformation of the city. In areas ranging form public safety and transportation to more transparent government operations, the Internet is enabling a new kind of 21st century city.

However, everywhere local government, business and civil society leaders are struggling with the challenges of making change happen. There is a lot of excitement but progress is uneven.

Surprisingly it is a city in the emerging economies that may have discovered a key to success -- Bogota the capital of the South American Country of Colombia. And it turns out the best way to transform a city for the digital age is to use those same digital tools to engage the population in reinventing their own municipality.

The beleaguered city has been beset by crime and corruption, but recently residents have become optimistic that improvements are possible. On October 31, Bogota residents elected Gustavo Petro as mayor. He replaced the previous mayor, Samuel Moreno, who had been suspended from office in early May 2011 after charges of bid rigging and accepting kickbacks.

During Moreno's regime, the city's coffers had been depleted by massive expenditures in a public transit system. Relatively little work had been completed for the large amounts of money spent. In the wake of the corrupt Moreno mayoralty, there was a crisis of government and a political vacuum. Huge changes were required but it was unclear who would take the lead in achieving it.

The Bogota Chamber of Commerce had been a relatively strong and active organization in the city for many years. Under the leadership of a new CEO Consuelo Caldas, the Chamber wanted to take a more active role in the city's economic and social development.

With a municipal election scheduled for the end of October, the Chamber saw an opportunity to challenge the mayoral candidates with ideas and proposals to fix the city. But rather than doing the back room lobbying that characterizes municipal politics, it took a different approach. It decided to engage the citizens of Bogota in a process to reinvent their city.

I was fortunate to participate in this process as an adviser, and from my perspective it was an extraordinary exercise that is rich with lessons for anyone wanting to help their own city. The goal was to encourage local businesses, community leaders and citizens to become involved in the city's affairs.The campaign was called "Set the Hearbeat of Bogota" (HACEMOS LATIR A BOGOTÁ -- HLB)

The process was launched in the spring of 2011, and involved a mix of online and local face-to-face initiatives. The Chamber wanted voters to help set the agenda for the new mayor and government. However, this was not simply about asking the candidates to adopt platitudes about building a better, more open city. Many of the proposals were not only fresh, they had teeth.

During the campaign, for example, mayoralty candidates were asked if they would adopt the International Development Bank's software for open procurement for government tendering. The software is highly transparent and makes bid-rigging and bribery virtually impossible. All the candidates were forced to say Yes. Now with an active citizenship the Chamber has some muscle to keep the winner's feet to the fire and do what he said he would do.

The HLB campaign used online tools such as a website (www.hacemoslatirabogota.com), Facebook, Twitter, forums, blogs and virtual surveys. There were also face-to-face roundtables held in the 19 districts of Bogotá and in the city's main universities.

The campaign gave citizens the tools to point out on a map of Bogotá the events that affect their environment and identify locations where the problems are most concentrated. Citizens were able generate and share ideas, build collaborative networks and generate projects.

The Chamber was able to involve more than 10,000 citizens. Its 26 roundtables attracted 1,800 citizen, business and student leaders. During the sessions participants made 1,600 proposals and 1,700 commitments towards the city. More than 8,000 people filled out the virtual and face-to-face surveys.

An advertising campaign to promote involvement in the HLB campaign and promote Bogota as a lively, active and participative city generated over 28 million hits on websites and 36,700 visits to the HLB's website. In addition, because of media relations efforts, 37 press, radio, television and Internet articles were published -- equivalent to $178 million in advertising.

As a result of this activity, the public developed and delivered to the mayoralty candidates five proposals, which they wanted included in the new mayor's agenda. Depending on the objective, these goals could be achieved by the public sector, the private sector, the community, or alliances among them.

The HLB campaign was instructive. Cities need new strategies for meeting today's challenges, and fortunately, the Internet and new digital tools provide a low-cost and effective way of doing this. These tools allow citizens to contribute ideas to the decision-making process and be engaged in public life. Residents can offer their wisdom and enthusiasm on an ongoing basis. When citizens become active, good things happen. People learn from one another. Initiatives get catalyzed.

As part of the planning for the Bogota initiative the Chamber of commerce identified 10 areas where networks, collaboration and information could transform the city. (See chart below.) These include helping economic development and competitiveness; improving public safety, transportation systems and reducing traffic congestion; delivering better human services and education; and making the city more energy efficient, greener and more sustainable. One of the most important opportunities is for improved government transparency and opening up government to provide myriad classes of data for companies, NGOs, and individual citizens to create public value.

How the Digital Revolution Can Transform Cities 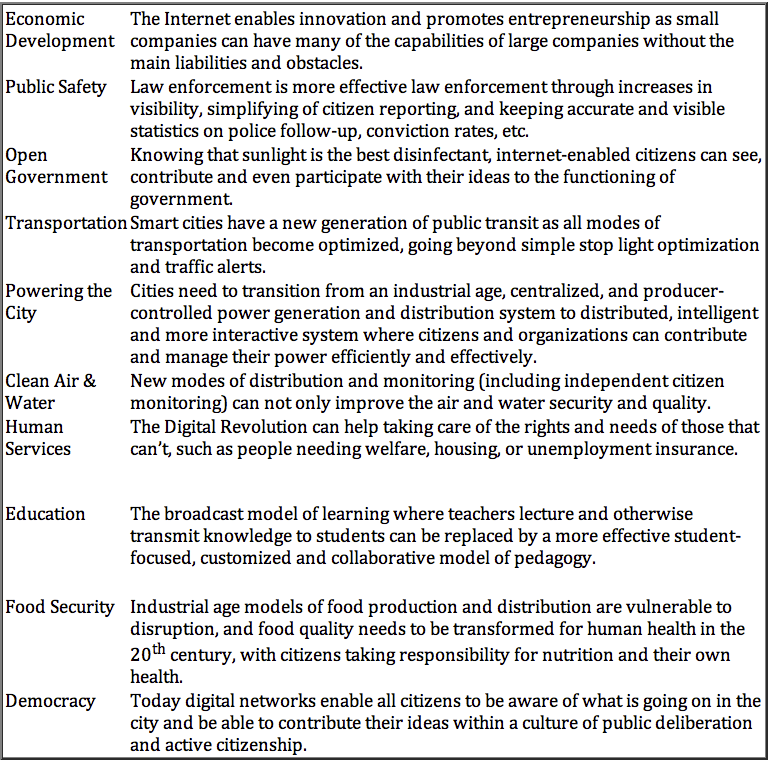 Around the world there are so-called smart city initiatives designed to use the Internet, mobile devices, cloud computing, new generation analytics and other new information technology innovations to bring about exciting change. What makes the Bogota experience so important is the involvement of the citizens. Most initiatives for digital age reinvention of the city are top down, organized by planners, strategists and often deeply influenced by technology companies looking to exploit the burgeoning new urban marketplace.

The Bogota process turned this on its head. Because it was not initiated by the local government it had no formal power. If the Chamber had simply called upon the candidates to adopt its point of view, its proposals would have been acting as a traditional lobbyist. Instead the Open Bogota process allowed them to harness the legitimacy of a broad cross section of the population.

For city governments attempting to provide leadership, it makes sense to embrace the Bogota approach. Involving thousands or tens of thousands of citizens generates more ideas. Citizens will come up with problems and challenges that otherwise might have been overlooked. Good ideas will receive broad support in the community, which is key if an initiative that involves spending large amounts of taxpayers' money.

The Bogotá Chamber of Commerce examined 12 techniques for citizen engagement. Depending on the situation, different strategies are more effective at different times. From this they chose a combination of approaches that met their needs best. 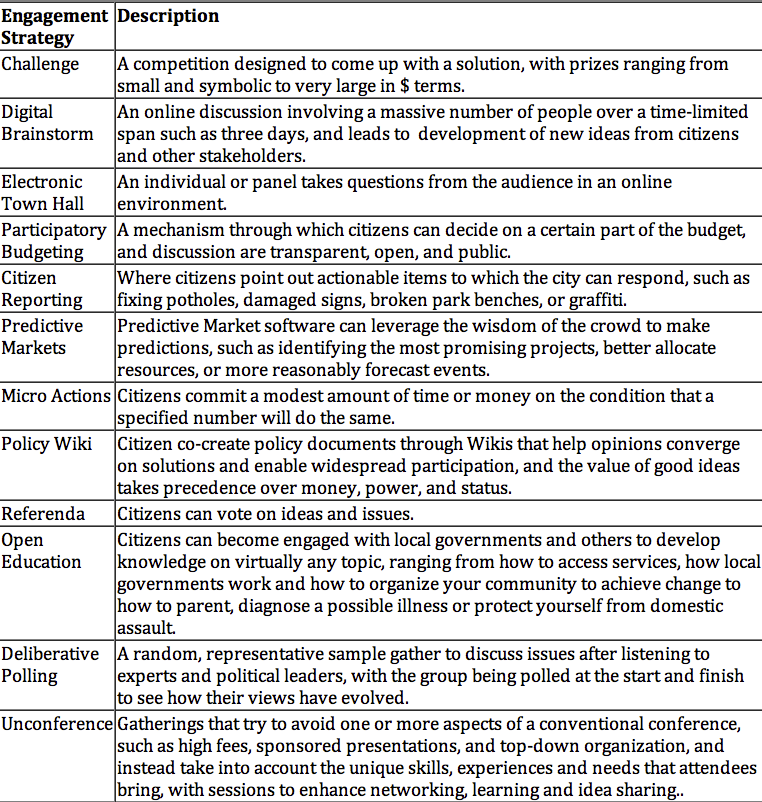