I just breastfed my daughter for the last time, and my heart is breaking.

Later this week, I'll begin injecting myself with fertility drugs, which apparently is the only way to make my body understand that I'd like to have another baby. I can't risk passing the drugs to my daughter through breast milk, so that's it. I should feel some sense of freedom or relief --after all, I've been tethered to this baby since conceiving her -- but I don't. I'm just sad.

I didn't expect to feel this way. Before I had my daughter, the only thought I ever gave to breastfeeding was logistical: which pump to buy, what pattern for the Boppy cover. My mom didn't breastfeed; in the early '70s, it wasn't in vogue. (The original women's libbers must have burned their nursing bras along with their underwire push-ups.) It's not something we ever talked about.

When it came time to have my own child, I knew breastfeeding was doctor recommended, so I put it on my to-do list, like getting the car seat installed or learning baby CPR. 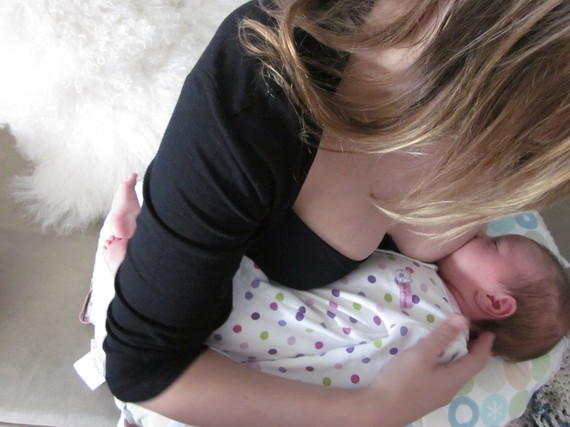 The moment my baby girl latches, I'm at peace. It is better than wine, chocolate or Xanax. (Which is good, since breastfeeding rules out a lot of the fun stuff.)

There is nothing like watching my daughter's whole body relax and her eyes flutter closed as she settles in for a feed. Sometimes I close my eyes, too, so I can listen to her sweetly satisfied sucking noises and blissed-out little sighs. Other times I stare at her impossibly lovely face. I stroke her hair. I sing "Love Me Tender." I sing "You Are My Sunshine." I sing a mellow rendition of The Beatles' "Eight Days a Week," and choke up when I get to "Love you every day, girl." In these calm, magic moments, I still can't believe I have a baby -- that I get to be a mom. When I'm nursing, everything is right with the world.

I know plenty of women who, for various reasons, can't breastfeed, and I would never want to make them feel they've missed out, or imply that their bond is any less strong. Of course it's not. There are many ways to connect, soothe and love. Nursing has been my way.

My friend Cathy compared my regret about weaning to her sadness over being unable to rock her son to sleep anymore (he got too heavy). These rituals of babyhood have meaning, and when our children outgrow them, there is pride, but also loss.

It's not just nostalgia bringing me down. There's anxiety, too. For 15 months, breastfeeding was my one sure thing. My baby put on weight, she thrived, she had very few colds, she bonded to me. I credited breastfeeding.

And frankly, it's been a crutch -- one I've been reluctant to relinquish. If ever my baby was hungry, scared, hurt, freshly vaccinated, tired but unable to sleep or just wanting a cuddle, I nursed. It was the magic bullet -- the salve for anything that ailed her. Do I even know how to parent without it?

I have other fears.

I'm afraid that once I stop nursing my daughter, I'll never get to hold her that closely again.

I'm scared that the moment I stop breastfeeding her, she'll move out and go to college. It all just seems to be going too fast.

The leader of my Mommy and Me group says I have to honor these feelings. The end of nursing is a milestone. She compared it to a time that will come later, when my daughter will be too big and independent for me to carry her around on a regular basis. Just thinking about this -- the end of carrying -- made my Mommy and Me leader mist up a little, and she's a grandmother now. Clearly, weaning is just one of many milestones destined to crush me.

Perhaps it's for the best that an outside force has led to weaning. Otherwise, I'd definitely be in danger of becoming one of "those women" -- the mommies who breastfeed way past the point of the child being able to walk up and ask for it. The women mercilessly mocked on television and among other women. The women I used to judge myself, but will never judge again. I get it now.

At 15 months, my daughter only understands some of what I say, but tonight I tried to explain the plan. I told her it was the last night that we'd be breastfeeding, and that while I had loved nursing her, she was a big girl and didn't need it anymore. I told her that we'd do many other special things together, and that I'd always be there to snuggle and hold her. I told her this with tears and snot dripping down my face in the dark.

When my daughter finished eating, she did something she'd never done when we nursed in the past. She said, "Up." I lifted her gently into her crib and tucked her blanket around her. She went to bed without a peep.

I wrote this post two years ago, for my blog Carriage Before Marriage. I'm happy to report that my 3 1/2-year-old daughter and I still snuggle plenty. Yet I cried when I re-read my story. Oh, motherhood!