In 2004 I started college. At that time I had no social media accounts. The whole concept was nascent and unclear. Eventually I signed up for MySpace, the then undisputed social media king. A few months later a friend enticed me to join TheFacebook- it hadn't yet shifted to the singularly iconic "Facebook." I recall liking MySpace better.

Back then Facebook was a useful tool for college students. I could list all of my classes in my profile to find other students in the same courses. That way if I missed a lecture it was an easy search and message to find someone with notes. By the time I graduated, this feature was gone.

Soon Facebook had dethroned MySpace, and found ways to seep into all aspects of life. Now my mom is on Facebook. My octogenarian great aunt has an account. I've had to go through old photos and delete anything that wasn't business friendly, because something that was once devoted to personal friendships is now searchable by potential employers.

This is all a preamble. I feel like these developments in social media can be regrettable, but are ultimately understandable. The real problem with social media is how we, as participants, use it.

In the last three years, I've found out three friends have died via Facebook.

The first was Dominic. He was 23. He died in 2012. We were in high school orchestra together. He was a freshman when I was a junior. Our conductor paired us to play the second movement of the Bach Double Concerto. It was the slow movement, and we both had terrible stage fright. It was not pretty. But like soldiers from the same horrific battle, we had remained oddly connected. 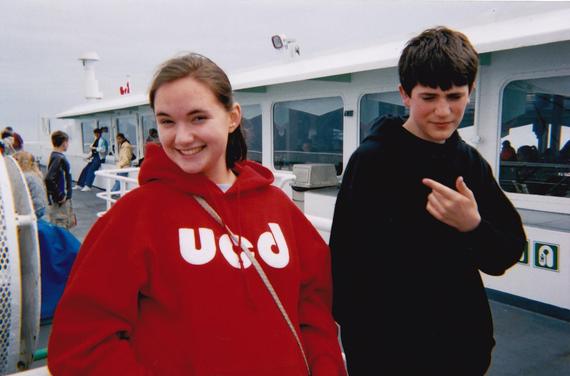 Dominic and I on the Band Trip circa 2003

The second was Summer. She was 25, and she died in March. I'm not sure where we actually met, but we connected one lunch where we discovered we'd primarily dated the same men in the previous year. Some women would have been threatened. We compared notes. She was one of the funniest people I ever met. And in times of crisis, she was there. When I met my husband I let us drift apart. I was a bad friend. Instead of actually talking to her, I watched her wall. It made me feel like we were still close.

Unfortunately, this is where I have to admit this blog had to be updated. A little over a week after the initial post, I found out Matthew had passed. Mathew probably would have both hated that I was writing this, and that I mentioned him, but I wish he to knew how deeply I felt his passing. He once told me that all he wanted from me was friendship, and I'm sorry to say that like Summer, I wasn't always there. I'd casually notice and like everything I saw of his that made it to my newsfeed on Facebook without actively staying in his life.

The newsfeed can be a deceptive device. It provides us with glimpses of what a fraction of our Internet friends are doing. The average Facebook user has 338 friends according to a quick search. Think on that number. Are you really friends with that many people? I have over 400 "friends." Of those 400, I only see the updates from a few dozen. It's not that the rest aren't posting ever, it's just that Facebook has an algorithm that narrows down newsfeed options to only whatever you are likely to interact with.

Those who make it to your newsfeed might never see what you post. Conversely, someone may see everything that you do when none of his or her posts make your feed. You never know who is really paying attention.

But it's so easy to imagine that if you see something someone has said or done online to feel like you're still real friends. Who knows how many people feel that way about you that you've never thought twice about?

The other issue is that we only ever see what someone decides to share. Most people will only show the good side of things. It's impossible to know anything more than broad strokes of a person's life by how they present themselves online. I never knew Dominic was so sick or Summer and Matthew were so sad by watching their Facebook posts alone.

If it wasn't for Facebook though, I might not have even known they died. I'm not sure if that's worse. Then again, would I have continued to feel so connected and then so heartbroken by their deaths had it not been for social media?

There is nothing intrinsically wrong with Facebook or social media. It can be a useful tool to help people communicate. Last week an old friend reached out on Facebook to let me know she was in my town and we were able to get together. The fact that she could easily contact me is beautiful. The problem with social media arises when anyone, myself included, starts to rely on it as the only means to maintain or affirm friendships.

I am guilty of allowing myself into the lull of passive online friendships. But I don't want to do that anymore. I don't believe that quitting social media is the answer. That removes one symptom but doesn't alleviate the underlying problem. Instead I plan to participate with caution, and rely on active communication to keep relationships alive.