Long before the Heartland Institute was in the business of organizing events like the "International Climate Change Conference"being held next week in New York, they were hard at work trying to minimize the negative public perception that second-hand tobacco smoke was bad for your health.

With that kind of past how could the media take the Heartland Institute and their upcoming climate conference seriously? Heartland could have easily played the role of the "Academy of Tobacco Studies" in the movie Thank you for Smoking.

How could anyone take seriously a group that took money from tobacco companies and downplayed the harmful effects of tobacco and then moved on to take money from oil companies and said global warming is all a big hoax?

A three year old could figure this one out.

Anti-smoking activists give smokers a stark choice: Stop smoking or die! In fact, there is a third path: Reduce the harm by shifting to less-hazardous kinds of tobacco products. For example, moving from unfiltered to filtered cigarettes, and from regular to "low tar" cigarettes, both appear to reduce the risk of lung cancer.

No victim of cancer, heart disease, etc. can "prove" his or her cancer or heart disease was caused by exposure to secondhand smoke.

There's also a lot of mention of the Heartland Institute in records obtained by the US government from the tobacco companies after they were sued in the 90's. What follows are some of the records we're uncovered.

1. Here's a section from a Philip Morris report titled "tobacco strategy" listing organizations that have questioned restrictions on the tobacco industry. It mentions past alliances on specific issues along with current plans to increase ties.

As a member of the Board, I am working with Heartland in several areas: their
meetings with various members of the House Ways & Means and Energy &
Commerce committees to present health care reform points of view consistent with our own; their coalescing of state-based free market policy groups to unify
on health care and work with the legislators, media and constituencies in their
respective states to mobilize on health care; their series of town hall meetings,
throughout the Midwest, to educate legislators and the media of the
evils of the Clinton plan and discuss more palatable alternatives; and their
development of fax-back technology, a system for the dissemination of research,
policy positioning, articles and op-eds (including PM points of view) to.
legislators, public opinion makers and media fax machines throughout the
country. Through all these efforts runs Heartland's 1994 top priority: to, inform
policymakers, reporters and opinion leaders of the true nature of the Clinton
Administration's health care reform legislation, and of the availability of superior
aiternatives....as Heartland has consistently opposed any reforms that require
additional government spending, advocating instead the combination of
deregulation, tax reform and medical savings accounts that can now be found in
several bills being considered by Congress. [my emphasis]

3. From a list of redacted material on from a 1994 strategy paper from R.J. Reynolds (RJR). The plan lists strategies for fighting public health efforts on this issue. Strategies include: Convincing the public that "there is a controversy, case is not closed," that "your lifestyle could be next," and substituting the term "prohibition" for the words "smoking ban" in communications.

"A number of print or video news releases could be developed to publicize the event and its findings. Excerpts of comments and summary of the debate could be developed and distributed to media, think tanks, Congressional Research Service and mailed to legislators and their staff. Could be sponsored by Columbia Institute or Heartland Institute..."

4. Here's screenshot of an update letter from a Heartland Institute Policy Director to the Manager of Industrial Affairs at Philip Morris: 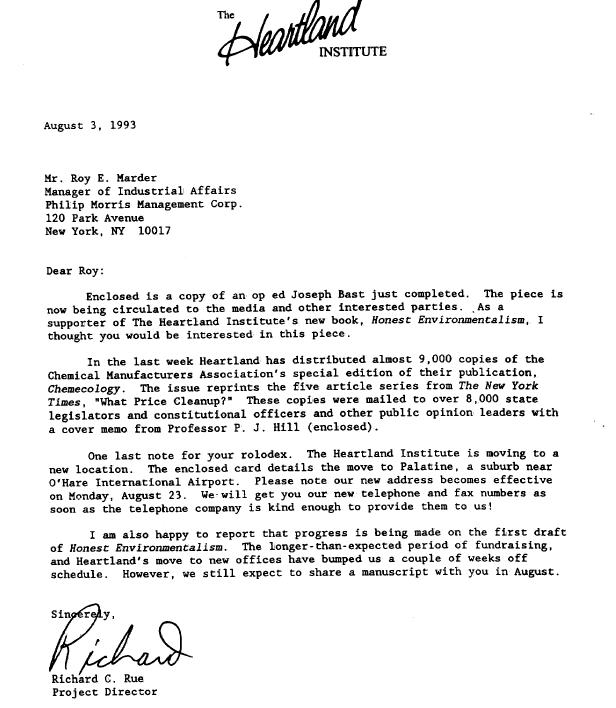 I think you get the picture, the Heartland Institute is plying the same tactics it did on tobacco with the issue of climate change.

In the face of all this straightforward evidence, I will be very interested to see what media are willing to buy the Heartland's tobacco, er... climate change spindoctoring at their "International Climate Conference" next week in New York.