This is a guest post by Rachel Zaslow, executive director of Mother Health International, a partner of Segal Family Foundation.

Imagine it is pouring rain. You are deep in a village, it is nighttime with no electricity, no phone, and you are miles from a road. These are often the circumstances when Ato Rose, a traditional midwife in Northern Uganda, attends a birth.

Ato remembers one birth where after the mother labored for many hours, she began to bleed. Fearing it would get worse, Ato sent neighbors to the nearest road to seek help. Hours went by and Ato became increasingly worried. She had no way to know if the baby was alive, if the bleeding was serious, or if the mother would make it to a hospital before catastrophe. Ato has been attending births for what she estimates to be 32 years, but she has never received an education. She has not attended grade school and she cannot read, write or count.

In 2011 the United Nations Population Fund (UNFPA) issued a State of the World's Midwifery report calling for investment in trained midwives as the single most important response to the global crisis in maternal health. Many babies born in rural areas of the Global South are received into the hands of traditional midwives; women like Ato Rose, who practice midwifery as it has been folklorically handed down to them.

After the UNFPA report was released, there was a shift in focus to increase the number of Nurse Midwives, scale up hospital services and move away from uneducated traditional midwives. While it is necessary to improve Nurse Midwives and hospital services, it is also impractical to think that rural women who are sometimes a several day walk from a health center will make it there in time to give birth.

Traditional midwives also have something hospital nurses do not- they are already trusted community members. Traditional midwives are often the first person a pregnant woman seeks out. They follow women throughout their pregnancies and beyond, making them critical players in the fight to drastically reduce perinatal mortality.

I met Ato Rose in 2007. She was living in an internally displaced persons camp after a 23 year-long war in Northern Uganda. Ato Rose shared the story that I have just shared with you during a meeting with 30 traditional midwives. They all nodded furiously with recognition and agreement as she spoke. Similar scenarios had happened to each of them.

Our conversation turned to how helpful it would be for the midwives to assess fetal heart tones before an emergency happened, enabling the midwife to resolve the situation or have time to transfer the woman to a clinic.

It seems like a simple idea and yet, without knowing how to count, how could a midwife learn to interpret heart tones?

Later in this meeting the midwives shared that they track their menstrual cycles using a string of beads that is cycled to the moon. A string of beads to count the days. This way of knowing makes sense in an area where there is no electricity and women still bleed with the moon.

My partner midwife, Olivia, listened to these narratives and remembered learning to count on a color-coded abacus. This is how the HeartString came to be. Olivia went home that night and made a string of color-coded beads that midwives could use to assess fetal heart tones. 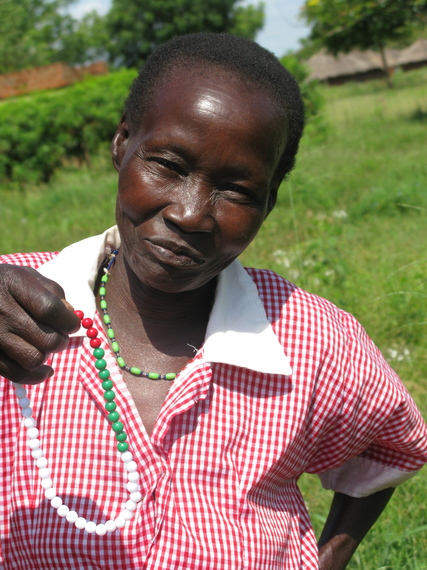 Using a sand timer that is set to 15 seconds, birth attendants listen to the Fetal Heart Tone (FHT) and press a bead each time they hear a fetal 'heart beat'. When the sand timer is emptied, the midwife observes where she has landed on the HeartString. If after 15 seconds she is in the white section, the FHT is too low; the Green, the FHT is in a range of normal; the Red, the FHT is too high. We then developed protocols for what to do when heart tones are too low or too high and transfer protocols for when a baby is in distress.

Over the last five years, our organization, Mother Health International, has used the HeartString with traditional midwives in Uganda, Guinea, Senegal and Haiti. Midwives who previously could not tell the difference between a high-risk mother and a low-risk mother were able to make appropriate medical decisions prior to an emergency, thereby avoiding catastrophe and saving lives. 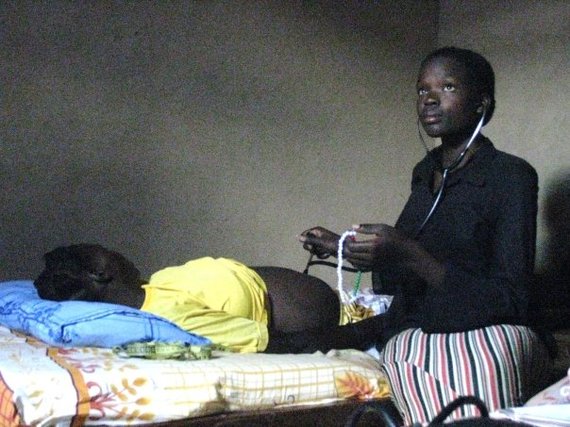 A Midwife Monitoring the FHT with HeartString.

The world desperately needs more trained midwives, intrinsically, we must also increase access to these midwives. Traditional Midwives are at the frontlines of maternal healthcare in rural areas. I believe that working with these midwives, across 'ways of knowing' is imperative to good outcomes.

We don't need tons of money or fancy equipment, such outside aid often impedes local infrastructure and causes more harm than good. By working within local infrastructures to offer practical solutions for rural midwives to improve outcomes, we will increase women's ability to access quality care and thus radically reduce perinatal mortality.