The picture had been embalmed undisturbed in bubble wrap for more than four decades in the back of a closet, the downside of my not having moved in 43 years. But last month, I realized that it was the 50th anniversary of the oil portrait that my father had commissioned of me in July 1966 when I was 18. Maybe it was time to either hang it, dump it, or inflict it on the kids.

The question as I unwrapped it was: would I still dislike it as much I had when I first saw it? The last time this thing had seen light was when the Navy movers packed it up in our house in Denver in 1973.

The answer was, alas, that I still couldn't bring myself to hang it. It's not as though it wasn't a good likeness of me then. I was incredibly slender, the result of having, against all advice, consumed some Brazilian tap water when my now-husband Olof and I first arrived in Brazil for our senior year of high school as exchange students in 1965. Unlike now where my cheekbones are hidden under too many years of food felonies, my cheekbones were my most prominent feature then, and my eyes in my much thinner face really looked that large.

It was the expression that I hated.

I showed the portrait to Olof who, of course, knew me at that age. "Wow," he commented, "somebody looks a little grumpy." I would have said "sullen" myself. I've always been a smiler and I'm sorry the artist insisted on a more somber pose, as he also did in the portraits my father commissioned of my sister and mother. We all three look like we're having a really bad day.

Not to disparage the artist, but I'm kind of wondering if he just wasn't very good at painting teeth.

In a moment of diabolical genius, I decided I would wrap it up and bestow it on my six-year-old granddaughter for Christmas. I would emphasize what a precious heirloom it was and how honored I was for her to have it. Marketing is everything.

Or not. Was it worth compromising my excellent relationship with my wonderful daughter-in-law?She would not be happy to have this portrait unloaded on her.

I finally decided to take a picture of the portrait and send it to both sons, commenting that I was probably going to throw it out. To my surprise, both quickly responded that it should be saved as a family heirloom.

Please note, however, that neither of them offered to take possession of it.

So what exactly do you do with a portrait that you don't like and nobody wants?

One of my other objections of the portrait was that it looked a tad caricature-y, a trait my older son Rory picked up on also. It almost looks like those big-eyed waifs from the 60s. Please don't give this away; it's a family heirloom. Personally, I don't want it. But I wouldn't mind a T-shirt version for Christmas!

My younger son Henry had a different slant. Obviously, you cannot throw it away. It is something you have to inflict on our kids by passing it down! Please note he meant the grandchildren generation, currently too young to protest, not himself and Rory.

But then I thought, maybe that's not a bad idea. And it could follow a family tradition as well. When we were growing up, our family had an 18-inch-tall plastic Santa lit up on the underside by 4-watt bulbs hanging over the mantle every Christmas. Part of its charm was its tackiness, and when the family moved to New Jersey in 1968, my two siblings and I insisted that it couldn't be thrown away. Not that any of us actually wanted it, mind you, but it had history.

In my husband's family, it was the pollywog pan, a cheap aluminum pan that he and his siblings used to catch pollywogs in in the creek behind their house. There is no accounting for the taste and emotional attachments of kids.

What we finally decided to do with Plastic Santa was share him: whoever had him in their possession gifted it, usually in cleverly disguised wrapping, to another sibling. Sometimes a sibling attempted pre-emptive interference. "Looking forward to seeing you next week but please do NOT bring Plastic Santa if you have it! We're moving soon and have no place to store it! I'm SERIOUS!" But invariably the Santa would show up.

So maybe that will be my legacy to my five grandkids: the round robin infliction of the portrait of Grumpy Grandma. They could even re-purpose it as an heirloom dartboard. Unless, of course, one of them lives near a dumpster. 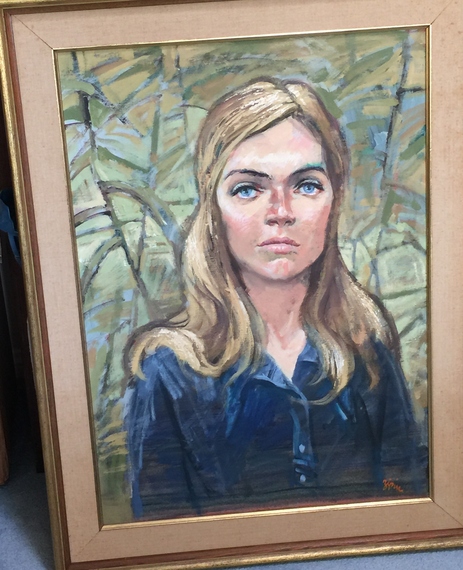 Newspaper columnist and author of book Inga Tells All. Lives in San Diego with husband Olof and granddog Lily