Is it possible to add anything to the discussion around work and motherhood without being bullied by other moms? My guess is no, but I'd like to share my story anyway. I love being a working mom, but I didn't always. For most of my kids' lives I'd been doubting my parenting choices, hoping they were empowering my kids, while secretly fearing I was causing them harm. I felt judged by other moms all the time. I was the single one with the startup, the mother who was always working... and that didn't seem to jive with other parents' expectations.

But one night, I was sitting at the dining room table with my family, and I started to think differently. It looked like most of our Sunday evenings: I was working on my laptop, my daughter Loulou was doing her homework and my son was playing Legos. Having just learned to write, Loulou gripped her pencil and hunched over her writing journal very seriously. Out of the corner of my eye I watched her write, erase, scrunch her eyebrows and add a sticker.

"What are you writing about?" I asked.

She held up her journal. 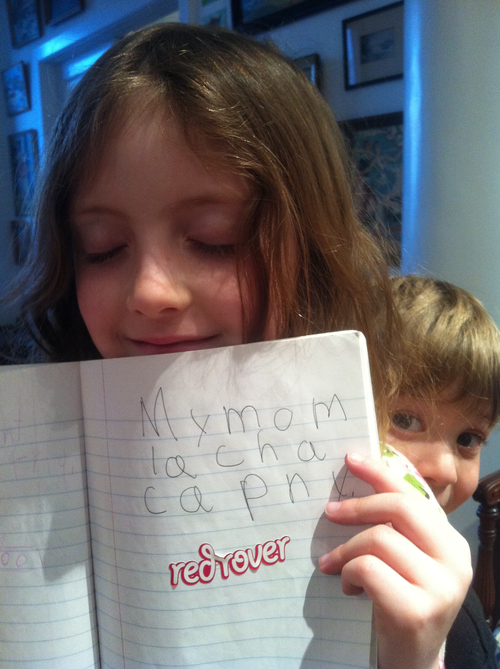 "My mom launched a company," it read in her inventive spelling.

My heart stopped and pushed its way into my throat. Usually, she writes about going to the museum or how annoying her brother is. But this entry was different. And that moment, which will rank among the most significant in my life, forced me to see something clearly, for the first time.

About six years ago, my life fell apart. My father died in awful circumstances, my son was born and I filed for divorce -- all within the span of a few months. I was well over 30 with two small children (one a newborn) and a freelance career that, though fulfilling, didn't include an office full of people. I was grieving, and always alone. Socially, I was in a pickle.

I spent a lot of time in my quiet apartment thinking about what it means to connect with other human beings. Almost every night, I would put my kids to bed and then go online, just staring at Facebook, waiting for something to happen. Very little happened, but I would still sit there, hoping. I would nose around the Internet, follow names I recognized on Twitter, Google old friends, then go back to Facebook ten minutes later to see if I had missed anything. I hadn't. I was trying and trying to wring something meaningful and sweet out of the Internet, but never with much luck.

After too many nights like that, I began imagining alternatives. At root, what I really wanted was simple: I wanted my life to be better. I wanted friends, community, a better social life -- in the real world. I wanted to be a better parent. I wanted less information, better information. And I certainly didn't want an imaginary or supplemental social life. I wanted a real one. My digital life should improve my real life with real friends, I thought. -- It should be an authentic reflection of who I am, and what my life in the real world is really like.

With those concerns in mind, I started working at home, sketching out a vision. I really wanted to build a company that would help parents like me. But founding a startup in an industry where I had no prior experience as a single mom without a co-founder? If you judge an entrepreneur by the wrong things, you would have dismissed me right then and there.

I knew I would have to work harder than other people. I'd have to educate myself on all areas of my new business to the degree to which I could lead every department with authority. I would have to try out skills in myself that were hitherto untried. None of this bothered me. In fact, I was thrilled by it all. My vision ultimately became RedRover, a platform that makes it easy for parents to find friends and fun activities.

What did bother me was the anxiety that I was failing my kids. I was tired. There was one morning I was so exhausted from working late into the night that when I dropped my son off at school like a zombie, I walked right back out of the school, forgetting that the junior kindergarten art show that he had been preparing for all semester was that morning. That night, when he told me at the dinner table, I cried. I couldn't forgive myself for my selfishness. I sobbed so hard that my daughter woke up to console me. I don't think she'll ever forget the night that Mommy was literally up all night crying because she missed Henry's art show.

I kept working hard, but teetered between feeling the satisfaction of doing good work, contributing to the world and feeling that my children deserved better than me.That's where I was mentally on the night when I saw my daughter's journal entry. And it settled me. I realized how closely my daughter was watching me and that I was wrong to beat myself up. Even when I thought I wasn't directly affecting her, I was. She was watching -- and what she saw wasn't hurting her. She was proud of what I had made. That gave me so much inspiration... I was ready to make more.

So, I kept building.

Later that winter, I got a call from Loulou's principal. She wanted me to be sure to attend the next week's school assembly. Why? I asked. Because Loulou had founded an organization. She had enlisted three like-minded friends, and papered the school in posters explaining its mission. She was going to address the entire student body the following week.

"'The Helping Foundation' was established because no one should be lonely," Loulou declared to a packed gymnasium. "If you're standing by the wall at recess feeling sad because you don't have any friends, come find us. We'll help you find a friend. Everyone deserves to be happy. We can help you." 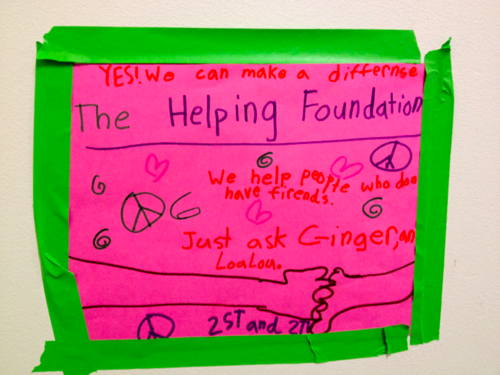 She and her three friends then performed skits showing ways students can reach out to each other when they see someone in need.

Sitting in the packed bleachers, I watched Loulou take the microphone in hand and tell her peers, their parents and her teachers what she finds important, what she believes in and what she thinks is possible. She could have been ridiculed. But she wasn't. She rallied the student body behind her. She demonstrated workable solutions and set a culture of kindness and empathy in place. It was like she took the mean girls and bullies and said: "Nope, not at this school." Truly, how could bullying survive in a school where students get up and say it hurts to be alone, so let's look out for one another?

I could feel the eyes of the other moms on me. These other moms around whom I often feel so uncomfortable being the single mom with the startup came up one by one afterward, marveling at my daughter's confidence and ingenuity. They asked me how I did it, what was my secret.

What was my secret? I thought I had done everything wrong. I didn't know what to say.

Later, I thought about all the things I could have said, like: If we cannot possibly know the quality of connection someone else has with her child, why do we think it's okay to judge her? Why is it that moms can't set the bullying aside and focus instead on what is right in front of them: the exquisite opportunity to know and be known, to inspire and be inspired? We're all in the same impossible predicament that society put us in -- why can't we acknowledge it and go from there? We're all in the same pickle. We were educated from childhood to become contributing members of society and to aspire to fulfilling careers, then we have our own children and society's expectations of us change utterly. Our collective confusion and anxiety is understandable. But why can't we recognize that this is a consequence of living in this time, and not allow the insecurity we are almost forced to feel manifest itself in a distracting and destructive cutting down of others?

Why don't we decide to look at the choices we make in our lives not as sources of anxiety, but as enormous opportunities for inspiration, both to and from our children? That connection, that authentic reflection of one another, the flow between the mother and the child, each inspiring the other to lead a beautiful, full life -- that's where our focus should be. It's a gift like none other.

What my working life did was inspire my daughter to have the courage to put herself out there, to be fearless in the eyes of her peers and to tackle nothing short of the pain of human loneliness as she sees it from her perch in the second grade. And conversely, her beaming face, so incredibly proud of me, everyday, makes me determined to do all the things she's dreaming I'll do in that photo from that Sunday night a year ago.