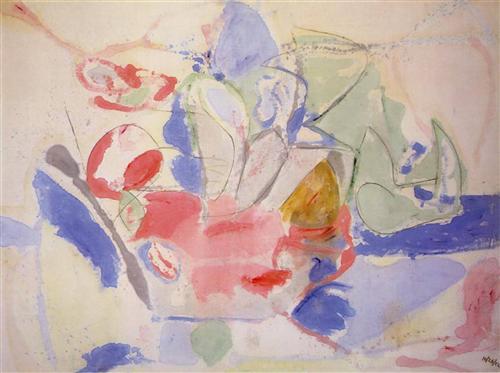 When Henry Geldzahler asked Helen Frankenthaler how she felt about being a female painter, she replied:

Obviously, first I am involved in painting not the who and the how. I wonder if my pictures are more 'lyrical' (that loaded word!) because I'm a woman... Looking at my paintings as if they were painted by a woman is superficial, a side issue, like looking at Klines and saying they are bohemian. The making of serious painting is difficult and complicated for all serious painters. One must be oneself, whatever.

Frankenthaler's ambivalence about being a female painter is shared by her successors, several of whom offer appreciations of her oeuvre. Painter Amy Sillman compares her to a ballerina, as great strength is required to appear so delicate. In the early sixties, after painting an homage to Marie Laurencin in sky blue, grey blue and soft peach, Frankenthaler wrote, "I recently painted a picture in sort of boudoir pastels, the kind of color I usually avoid like the plague and I'm calling it 'Warning to Lady Painters.' The light touch is often the strongest gesture of all." A decade later she said, "For me, being a 'lady painter' was never an issue. I don't resent being a female painter. I don't exploit it. I paint."

Frankenthaler was the only woman included in the Metropolitan Museum of Art's New York School retrospective. But the New York School's second wave, which also included Jane Freilicher and Grace Hartigan, was called feminine, as opposed to the more masculine Abstract Expressionism, forged by men like Jackson Pollock and Willem de Kooning, who broke historical molds. New York School painters were seen as refining the revolutionary work Abstract Expressionists had begun, rather than starting their own revolution. Terms like 'lyrical', 'colorful' and 'restrained,' often used to describe the New York School, could also be invoked to downplay a work of art's importance, to sideline it as decorative, or simply pretty.

The division between masculine and feminine in art echoes the conflict between the 17th Century followers of Rubens (who favored color) and Poussin (who preferred structure.) Those who found structure more intellectual called mere color superficial.

Rather than argue over importance, painter Laura Owens embraces the idea of modest art. She writes:

I also like to think about Frankenthaler's paintings in terms of the very minor medium of watercolor. Watercolor painters are in a different art world all their own, and outside Winslow Homer and a few others, no one's watercolors are ever thought of as a major part of their art. So I sometimes see her paintings as a political maneuver, championing watercolor-like effects-feminine, minor-as a medium.

Linda Nochlin in her seminal essay, "Why Have There Been No Great Women Artists?" writes:

Why have there been no great women artists?' The question tolls reproachfully in the background of most discussions of the so-called woman problem. But like so many other so-called questions involved in the feminist 'controversy,' it falsifies the nature of the issue at the same time that it insidiously supplies its own answer: 'There are no great women artists because women are incapable of greatness.

In the late fifties, Frankenthaler made several studies of Old Master paintings, including Rubens' portrait of his wife as Venus, Titian's Rape of Europa and Goya's Mayas on a Balcony. No matter what kind of woman she is, whether a modest young lady in a lace mantilla, a voluptuous woman wearing only a jeweled bracelet and pearl earrings or a high born princess, a woman's role in art is always the same: a model, a subject. In Rubens' Venus, his wife watches him paint in a mirror held by Cupid. All she can do is look and pose.

Perhaps it is not possible for a woman to be a great artist. If so, is it possible to reframe the world so that greatness is irrelevant, beside the point, a fundamental misunderstanding? Painter Carrie Moyer is drawn to the way Frankenthaler's work can look "undone... everything seems to simply 'appear.'" Frankenthaler has described it as, "One really beautiful wrist motion, that is synchronized with your head and heart, and you have it. It looks as if it were born in a minute." The process is clear; it is right on the canvas itself. There is no dissimulation, no constructed narrative. Moyer admires Frankenthaler's regard for gestural painting as being overly theatrical and emotional, preferring instead the moment of creation, the work, sui generis.

Sonya Rudikoff felt Frankenthaler's "art of process" reflected "life as it is lived... a continuous and vital response to existence." This sense of art echoing life moment to moment stands apart from the 'great work' ideal. "No one picture announces itself as the only picture, as the end of the world. Painting is not finished or destroyed, it does not end with this picture painted, it can go on."

This is a radical concept, but also an ancient one, calling to mind Buddhist monks who meticulously draw maps of the heavens in colored sand, only to blow away the finished drawing with quiet breaths. The point of the work is not a completed object, but its own creation. This philosophy makes the 'great artist' 'great work' approach feel like vanity.

Although Frankenthaler has renowned paintings, like Monet-with whom she has been compared, as his work is also "formless," offering mere color-she is identified with her oeuvre rather than a single exemplary image.

Further distancing herself from the proud desire to make self-consciously 'great work,' Frankenthaler embraced the concept of the accident, folding it into her practice, working with it and coming to rely on it, as she said, "so that the whole surface looks felt and born all at once."