For a number of decades we've been rhetorically relegating a number of places and regions as dying, while tens of millions continue to live, work, and even innovate there. Once thriving industrial job centers, now depicted as places that are hollowing out - with business, talent, resources, and industry fleeing - and plagued by abandoned buildings and blighted homes, high crime, locked into some ritualized implosion. In some cases, it may even be the city in which you were born and raised.

However, mention the term "economic recovery" and, depending on where you are and who you're with, you'll get very different reactions. Those living in the Bay area and other technology-driven cities, for example, can easily lose sight of the real, day-to-day, economic challenges other regions face. Housing surpluses, unemployment, and even abandoned neighborhoods are quite foreign concepts.

Many have forgotten that - much like San Francisco, Chicago, and New York today - these cities once attracted and mobilized millions of workers, gave birth to many of America's greatest inventors and entrepreneurs, and forged the industrial might that made America a global economic power.

In spite of this storied heritage, the legacy constraints facing many of these cities and regions are many: fiscal shortages, aging populations and infrastructure, financially besieged social programs, compounded by an employee benefits system in need of real reform.

Yet within these cities there remains relentless grit and determination, creativity, and even the seeds of economic revival in the aftermath of the Great Recession and industrial transition. This movement is drawing on talent from across sectors and embracing new approaches to government reinvention such as public-private partnerships. 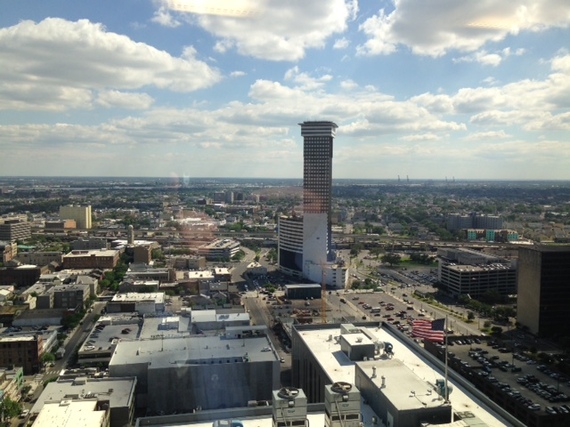 On his recent "Rise of the Rest" tour, Steve Case reminded us of a particularly poignant example. Sixty years ago, Detroit was the driver for innovation and growth. Detroit was America's Silicon Valley. And today, it's in cities like Detroit, highlighted by Case, where some of our greatest challenges and opportunities exist.

Detroit is again innovating (and succeeding) and introducing new ways to attract a young, involved citizenry to the table. Come Play Detroit offers unique social and intramural sports leagues; PowerMoves.NOLA recently launched in Detroit and seeks to increase the number of venture-backed minority founded companies; and the Write a House program has connected aspiring writers of all kinds with Young Detroit Builders to gut and rehab foreclosed houses.

Programs such as these give young people skills and experience that will last a lifetime, and even an opportunity to own the very homes they revive. Cities such as Detroit likewise inspire unexpected partnerships, start to rekindle their tax base, and nurture a recommitted citizenry.

Economic stress and other constraints are formidable, and are certainly being experienced most urgently by the residents of cities that once powered our nation's growth. Yet, some cities have been able to overcome or manage their problems. Increasingly these stories are being shared, testimony to the power of human ingenuity and creativity in the face of extreme difficulty. In fact, Peter Sims recently captured much of this spirit when he set out with the BLK SHP (black sheep), last month across America to cities such as Cleveland, Louisville and New Orleans.

The fact is that in these cities people are pushing outward and inward, trodding little traveled paths and forging new roads. It was this spirit, "similar to America's Heyday" that this pioneering entrepreneurial spirit, settled this vast country and made it great. Today, we're in the midst of what may eventually be known as the "Heyday of America's Cross-Sector Partnerships." These partnerships are social, economic and generating impact in the "unexpected" cities and examples include:

Highlighting models of cross-sector success and engaging leaders at places like the Presidio Institute is one of the best ways for us to create the necessary momentum for change in our cities. As leaders from government, to business, and philanthropy, there are important, difficult calls to make, while continuing to inspire, encourage, and to shine a light on the often forgotten and underestimated places of America. We should be #AllInforCities and the people within them who are working hard to make them as great as they can be.