Here's the scenario: You're researching hotels for an upcoming trip to Paris, and you find a cute two-star hotel in the Latin Quarter for €88 a night. It sounds like a good rate.

But you dream of an upgrade. What if you spent just a little bit more on a three-star -- or maybe even a four star. You search around and find a four-star hotel with rates for a bit more -- €135 a night.

For a four-star hotel? The more you ponder it the more reasonable it becomes. Although it's higher than you had budgeted for Paris, you talk yourself into it.

And in the end, it will only cost you €47 a night more than that other hotel, right?

That depends upon what other charges might get in the way...

"Affordable" four-star hotels
Many three- and four-star hotels will lower their rates to appear more competitive in hotel search results, but then make up the difference with little extra charges in the end.

Meanwhile, cheaper one- and two-star hotels start out cheap, and usually wind up cheap, because they tack on fewer charges. Ironically, these cheaper hotels sometimes offer comparable services, yet don't charge for them!

It's the little things
I review hotels for a living, focusing almost entirely on Europe's largest cities. Here are some common "bill enhancers" that I often see in swankier hotels in Europe (and, for that matter, in the U.S., too):

Wi-Fi charges: A wireless Internet connection is an especially common "up-sell" for upscale hotels. €10 a night, even €15 a night is not unusual. (I once paid €20 a night in Amsterdam for a connection and am still mad about it.) In one- and two-star hotels, however, Wi-Fi is often offered for free, especially in a city like Paris.

Breakfast: While one- and two-star hotels often charge €6-10 for a simple breakfast in Paris, a four-star property may charge €15-25 for a breakfast buffet. (Sure, the experience will probably be more luxurious, but that's one pricey pancake!)

Cancellation charges: When searching for hotels, the initial rate you see may be a special "non-refundable" rate, and may jump by 10-20 percent if you want to upgrade to a more flexible refundable rate. Be warned, however, that even the refundable rates come with some limitations.

Bottles of water: This is one of my favorites. Welcome to your room! Enjoy this bottle of water -- for a really steep price! The "not-free bottle" is a common tactic used in expensive hotels everywhere. 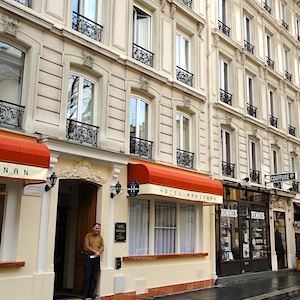 One-star wonders
When I'm reviewing cheap hotels in Paris, I'm constantly reminded that so many budget hotels give away extras that more expensive hotels would charge for.

For example, the one-star Hotel Marignan in Paris' Latin Quarter, which I reviewed back in January, offers large rooms that are great for families, free breakfast and free Wi-Fi access in the rooms. Even better, they have a guest kitchen (and will make space for you in the fridge) and even have washing machines and dryers for the guests (with free soap). Doubles are €64-103.

Of course, this hotel isn't for everyone. It's a simple, small place. The reception closes at 10:45 p.m., although guests are free to come and go with their room key. Most notably, the hotel doesn't have an elevator (which is a big deal for many travelers).

However, when you book a room at the Marignan, at least you know what you're going to pay when you check out. All the extras have already been paid for.

Have you been "extra charged" at a hotel? Leave a comment and tell us about it!