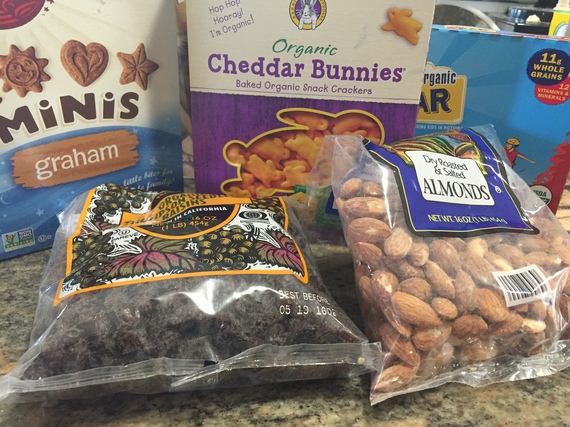 This will not be enough food to sustain my offspring for two hours. They weigh a grand total of 100 pounds combined. My children, not the snacks.

It's summer! What better time to get away for a few days. There are often some pretty amazing travel deals -- particularly to the warmer parts of the country -- during the summer that may seem too good to pass up. A trip to San Diego for only $150? Yes please! What could go wrong!

However, even after adding in all the airplane surcharges and taxes and so on, you are still only looking at a fraction of what it costs to travel with kids. Here is a breakdown of some of the most commonly overlooked hidden expenses. This applies to my family of five, but the baby does not yet need his own ticket, so let's say we are starting with a base cost of $600. I'm also being incredibly generous here and assuming that you are super human and do not need to bring every single thing you own with you onto the plane, thus saving approximately $40,000 in baggage costs.

All right, let's tally up here. Our original steal of a deal plane cost for a family of 5 was $600. Total cost after these hidden expenses: $1209! That's right - slightly more than the entire cost of the tickets will have to be forked over for these expenses that the airlines just don't tell you about.