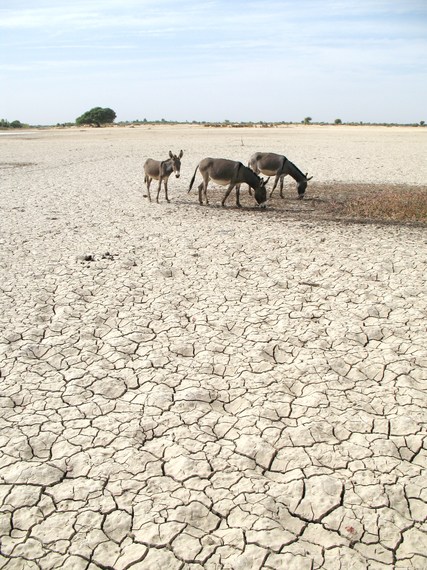 Floods and droughts in many parts of the world are getting ever more frequent and intense. Scientists have long warned that a changing climate is making such weather events more extreme. What is often neglected in the public debate is that the impacts of climate change on flood and drought disasters are exacerbated by environmental destruction.

A new report by Wetlands International argues that "damaged ecosystems are the hidden hand behind many supposedly natural disasters. They can be what turns extreme weather into human calamity." The new report, Downstream Voices, was authored by the eminent environmental journalist Fred Pearce.

With case studies from India, Mali and Senegal, Downstream Voices documents how the degradation of wetlands and rivers compounds the impacts of climate change. Embankments separate rivers from the floodplains which they used to nourish, and stop floods from receding when they inevitably topple or breach the human-made barriers. Dams divert water into commercial irrigation schemes and intensify the impacts of droughts on downstream ecosystems and farmers. Water grabs by international investors growing cash crops for export further degrade wetlands on which poor farmers rely for their livelihoods.

"Wetlands are nothing without water," the new report states with irrefutable logic. Riverine populations - and eventually, all of us - become ever more vulnerable to climate change as these vital flood and drought buffers dry up.

Strengthening climate resilience requires reversing the degradation of ecosystems. Such an approach, Pearce argues, "places emphasis on natural ecosystems which grow and adapt to changing environments, rather than physical structures, which cannot." Wetlands International works with local communities from Kenya to the Philippines, from Mali to India in restoring ecosystems as the best defense against climate disasters.

The Inner Niger Delta - a giant green oasis in West Africa's arid Sahel zone - illustrates the importance of healthy ecosystems for climate resilient livelihoods. The wetland's natural flood cycle sustains rich ecosystems and fisheries. The yearly flood also allows farmers to plant their crops and herders to feed their cattle. Yet climate change and upstream dams have reduced the flow of the Niger River, which feeds this rich ecosystem. Wetlands International supports local farmers in replanting the extensive pastures of hippo grass, which nurse the delta's fisheries and feed the cattle of nomadic herders at the same time.

As the report acknowledges, fish ponds, hippo grass fields and other local restoration projects alone are not sufficient to reverse ecological degradation and reduce vulnerability to climate change. Decisions by central governments and international actors can dramatically undermine such efforts.

Since the Wetlands International report was published, the World Bank has announced its interest in funding the Fomi Dam, a $1 billion irrigation and hydropower project on West Africa's Niger River. Located upstream of the Inner Niger Delta, the dam would feed commercial irrigation projects and generate 90 megawatts of hydropower. It would in turn reduce the area inundated by the Inner Niger Delta's annual flood, on which one million people depend, by 1,400 square kilometers.

A separate report commissioned by Wetlands International estimates that if the Fomi Dam had already been in place, the delta region would have experienced eight disastrous drought seasons rather than one between 1982 and 2003. "If the Fomi Dam were built, the impact on people depending on fisheries, rice production or livestock in the Inner Delta would be devastating," Wetlands International warns.

The World Bank is currently scheduled to vote on an initial credit for the Fomi Dam project at the end of January 2015. Downstream Voices presents an excellent analysis on why protecting and restoring wetlands and other critical ecosystems is our best insurance against unpredictable climate risks. International Rivers will work with Wetlands International to expose the impacts of outdated top-down approaches such as the Fomi Dam to decision-makers.