I know what you're thinking: it's not fair. Valentine's Day gets lingerie, erotically-shaped chocolates, and outright permission for table-side boning. Naughty elves, champagne proposals, and poor choices made with co-workers at the office holiday party are staples of Christmas. Halloween's sluttification of every costume from bumblebees to oxygen molecules has been thoroughly documented. But "what about Thanksgiving?" you cry in rage. Where is Thanksgiving's contribution to the expanding sexualization of holidays? Am I a weirdo, you ask, to think that Thanksgiving should be another day like all the others set aside for national recognition that encourages me to get my freak on?

Poor, lonely, bloated Thanksgiving. It's a day that simply does not lend itself to an atmosphere of sexy sex by design. Triptophan levels tipping the scales, lulling you to sleep, working against your anguished libido (it's been, what? A good three weeks since the last sexy holiday?), family strife and meltdowns over random issues like the superiority of your sister's cranberry relish or whether or not the gravy boat belonged to a distant familial dead person lessen the mood, and then there's knowing that in nine hours you're expected to suit up and head to Walmart to wait in the freezing cold with a hundred other morons risking death and public humiliation in the hopes of getting a $25 Xbox.

A search for vintage Thanksgiving ads (I Googled for a friend, swear) yields a smattering of strangely, yet kind of brilliantly, conceived images featuring scantily clad farm girls, flirtatiously menacing turkeys, sexy pilgrims, which was likely news to them, and one budding bombshell named Marilyn Monroe bringing the penultimate in Thanksgiving sexy. Maize, untamed wilderness, and barnyard fowl never seemed so... alluring.

Adelle Arlett, a 1954 Hollywood starlet, proved that there was little difference between Tom turkey and the turkey you're dating named Tom. Bat your eyelashes, smile prettily, and make him feel like the only bird in the roost and in no time at all, Tom will lay himself down willingly upon your shiny, silver, dinner platter. So disarming is her gaze, so entrancing are her long, shapely legs that we barely even notice the bludgeoning instrument dangling casually off the hip of her shorty short short shorts. Tom turkey, we think, what a lucky bastard. 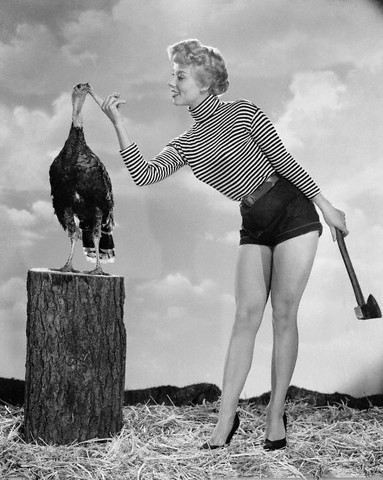 Maybe it's not Thanksgiving's fault. Aside from the suggestive shape of that cornucopia, there is not much in the way of overly sensual imagery. Turkeys are not exactly the Hugh Jackmans of the animal kingdom. That's where actress Vera-Ellen comes in. You might recognize her as the lithe, spritely, pixie Judy Haynes to Rosemary Clooney's Betty Haynes in the cult classic White Christmas. Here is Vera-Ellen proving what men have known for eons: girls with weaponry = hotness. If you're looking for a way to set the mood after you've rolled yourself off the couch and brushed the last stray crumbs of pie from your lap, glimpsing your special so-and-so dolled up like a French maid Pilgrim clutching a long, old timey musket might just be the way to go. 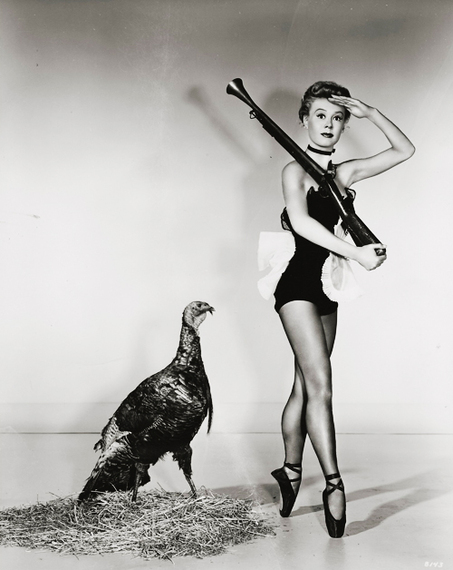 Ages ago someone set the bar for the original, sexy vampire Halloween costume, so too did someone sashay along to set the standards for the sexification of Thanksgiving. Marilyn Monroe. Duh. In 1950 Marilyn posed for a Thanksgiving shoot where she, let's face it, could have been wearing a burlap sack covered in industrial waste and feathers and she still would have been the most shining, gorgeous, outrageously beautiful and sexy person to stand next to a turkey in a tree. There is no use competing with Marilyn when it comes to sexual historical role-play. There is no competing with Marilyn when she's holding the phone book or picking popcorn out of her teeth. You might as well just cook that damn bird in the nude and hope for the best. 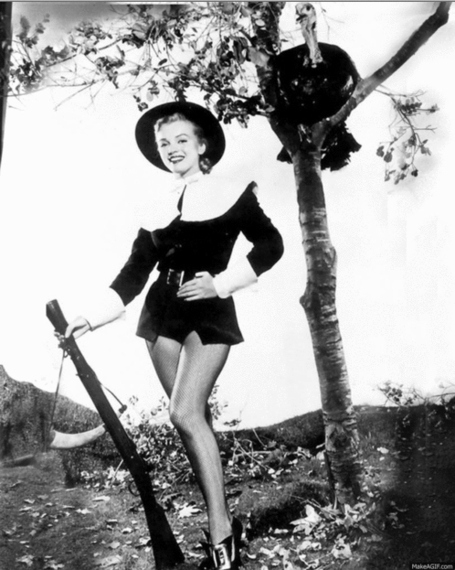 Don't let this holiday handed down from us by our aggrieved, pox-ridden, land-grabbing ancestors suffer from a lack of eroticism; whatever you do (whomever you do), make Sexgiving truly a day for the history books.