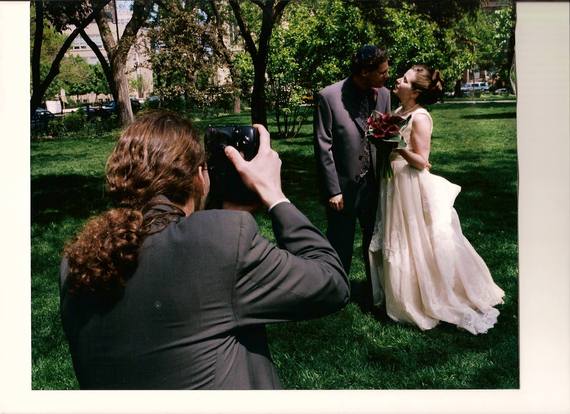 I have three favorite photos from my wedding. The first is of my husband and me kissing and being photographed by our wedding photographer. The picture was taken by our photographer's assistant. I love it because it's not only a great picture of my husband and me (and my dress) in great lighting, but because it so perfectly captures the overwhelmingly weird feeling you get on your wedding day. It's the most personal and special moment in your relationship, and you have 200 people watching and about 100 of those people are taking photos!

My other favorite photos from my wedding were taken by guests. There's the photo of two of my flower children asleep on chairs during the reception, their mother standing guard and the other of a friend of ours who is no longer with us doing a rousing Viking cheer. I hadn't known about either of these events until friends sent me the photos. I'm sure if our photographer had seen these moments he would have captured them, but even with a second shooter, one person can't be everywhere.

A lot of wedding photographers and guests have similar stories about capturing a moment that surprised the couple. We see these shots all the time at Snapshots so we asked around to get the stories behind the photos.

Charly, a recent New York bride, has a favorite photo of her and her husband making over-the-top shocked faces as they listen to a friend tell a story. They remembered listening to the story but had no idea their faces were so expressive, or that someone was capturing the moment.

Wedding guest Darlene once snuck into the room where the bride and groom were toasting and captured a picture of what they thought was a private moment. Although most of us probably wouldn't approve of guests going into rooms where they aren't invited, she says that the couple appreciated the photo later on.

New York photographer G.E. Masana shocked one couple with a different kind of kiss cam. He snapped a picture of the bride's parents kissing, a moment he didn't realize was unusual until the bride, looking at the photo yelled out, "Holy Snickerties! They kissed? They never kiss!" 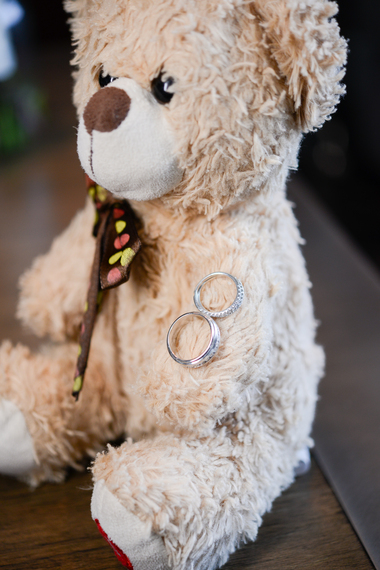 Tennessee photographer Veronica Yankowski also took a photo that surprised her clients. The clients had a special teddy bear that frequently went on trips with them and was present at the wedding. At the request of the bride's sister, while waiting for the bride to dress, Yankowski took a photo of the stuffed animal holding the wedding rings. Although as a photographer she wasn't pleased with the lighting or composition, the bride was thrilled with her sister for suggesting the shot and her photographer for including it. 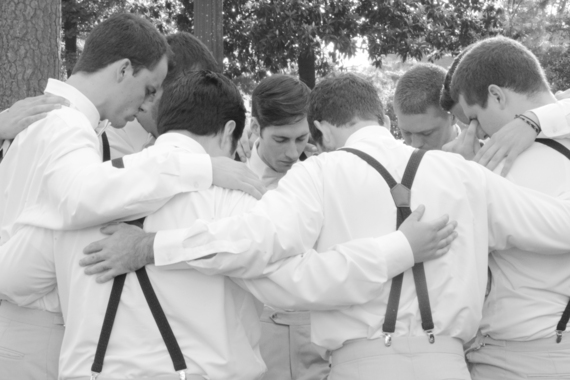 Alabama photographer Brittney Box of Jo Dee Marie Photography regularly surprises couples with a photograph she sneaks during a prayer session. As Brittney says, "The emotion captured in these pictures is priceless. Most of the time the bride and groom never knew I was taking the picture until they get their pictures back."

When planning a wedding you often think of it in terms of big moments- the dress, the first dance, the cake cutting, but in reality it's the hundreds of tiny moments throughout the day that really define your wedding. You never know what moment will make you call out "Holy snikerties!" but having both your guests and a professional photographer document your wedding ensures that you don't miss a thing, even the parts you never saw.