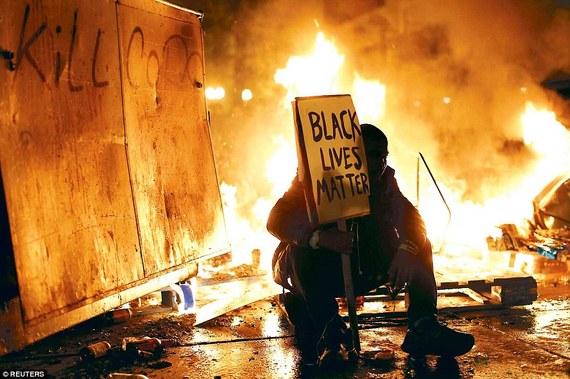 An eruption of violence unfolded on national television last Monday night after the city of Ferguson, Missouri, learned that Officer Darren Wilson would not be indicted by the St. Louis County grand jury for the killing of Michael Brown Jr., yet another young, unarmed, black male. Eager for answers throughout this painstaking ordeal, the black citizens of Ferguson and other voices from across the nation were calling for unbiased due process in the investigation into the shooting of their "son." Attorney Benjamin Crump, representing Brown's family, implored Missouri Gov. Jay Nixon to assign a special prosecutor to the case, one who is not intimately involved with the Ferguson Police Department on a day-to-day basis. He called for, at the very least, an appearance of fairness. Yet his pleas fell on deaf ears.

Michael Brown's stepfather, Louis Head, attempting to console his wife after the announcement by the county prosecutor that there would be no indictment of the man who killed her son, became visibly overcome with grief himself and unbridled his passions. Unleashing his pent-up anger, he bellowed, "Burn this b**** down!" A war cry that's well known among the dispossessed, this demand for justice is born out of the black struggle against the preponderance of everyday forms of institutionalized white racism. The news outlets have tried to characterize his words as the ignition that incited a weary crowd to violence. Whether you believe his cries to be literal or figurative, the rebellion was inevitable regardless of his statements, because what is hidden beneath this sound bite are decades of black rage and frustration over blocked opportunities and the denial of equal access to decent jobs, high-quality education, health care and other resources that white Americans ignorantly take for granted. Instead, what black Americans have come to expect from their homeland is continued discrimination in virtually every sphere of society and the subsequent white denial of the existence of said discrimination. In this context, Mike Brown's death stands as a symbol for any black youth who has ever found himself or herself accosted by our racially exclusive social structure. In this case, the criminal-justice system has been woefully unfair and outright hostile to the concerns of black Americans and other Americans of color.

The African-American experience of North America was born from violent encounters with elite white men and their unrelenting quest for power, control and economic supremacy in what would later evolve into our free-market capitalist empire. This monumental achievement by such a young nation came by way of genocidal campaigns against Native Americans for their land and the enslavement of Africans for their labor power. Today most Americans underestimate the foundational and destructive nature of systemic white racism and how it is reproduced with each proceeding generation. Black folks have had centuries of violence inflicted upon them by their nation and each other. The people grow tired and impatient, and, left with few other options, they ultimately dissent.

It was almost 50 years ago that the Watts neighborhood of Los Angeles went up in flames. The 1965 Watts riots marked the turning point in the civil-rights movement when black Americans had had enough and chose to fight violence with violence. Though the riots were set off by a particular act of police violence against a handful of black citizens, the California governor recognized that the main source of the anger that fueled the riots was the broader context of high unemployment, poor schooling and inadequate housing for blacks in the city. Not much had changed 27 years later when rioting once again erupted in the area following the acquittal of the four officers who brutally beat the late Rodney King in plain view of their dash cam. And not much has changed in the 49 years since the initial riots. An extended history of violence exacted on black Americans has found its way to the millennial generation. This modern-day riot is in line with Bayard Rustin's 1966 observation that the unequivocal purpose of the Watts riots was to "no longer quietly submit to the deprivation...."

Just as Rodney King was called upon to appeal for peace with his famous remark "Can we all get along?", Michael Brown Sr. had a similar request of the people of Ferguson. But in the end these urgings fell silent, because the riot was bigger than this one moment in time. The unrest is ultimately the result of systemic inequalities that have long determined African Americans' standing in society, relegating them to a position as America's most disenfranchised group. Four hundred years of violence and oppression cannot be assuaged by a few public appeals. Calm and peaceful demonstrations constitute a strategy that eventually runs its course as an effective means of being heard. Black Americans are repeatedly expected to exercise restraint and show patience in the face of white brutality -- this after years of suffering and oppression. But after a series of tragedies involving black men and boys dying at the hands of white law-enforcement officers (or community watchmen), very little has been done. Black folks remained calm through Oscar Grant and remained calm through Trayvon Martin. They remained calm through Eric Gardner and Dante Parker and John Crawford. And still no action was taken.

What is happening in Ferguson is a result of the unfinished business of the civil-rights movement. The process is unjust, and laws have been systematically stripped away, undoing many of the provisions that protected minorities from white terror. Many blacks feel they have been denied all legitimate means of civic redress; thus they have no other appropriate venue to express their angst. Malcolm X warned a generation ago that it's a question of "either the ballot or the bullet." It is not merely coincidental that the rioters' first act of defiance was to set two Ferguson patrol cars on fire; this aggressive act epitomizes the deep mistrust that the citizens of Ferguson and other cities have of their own police force, which is supposedly sworn to "protect and serve" its residents. Gone are the days of the community police who were a part of the people. The real perpetrators of violence in U.S. society are those with white privilege who disproportionately target young blacks on the presumption of guilt. It is not a surprise, then, that the voiceless resort to anarchy to be heard.

And still at every juncture, modest attempts at societal transformation are typically met with stiff white resistance and rancorous political partisanship. Blacks are blamed for their own circumstances in life under a regime of white supremacy, and if they fail to pull themselves up by their non-existent bootstraps and carve out a piece of the "American dream," it is their own fault. As Dr. King observed, "a riot is the language of the unheard." What did you expect would happen, America?