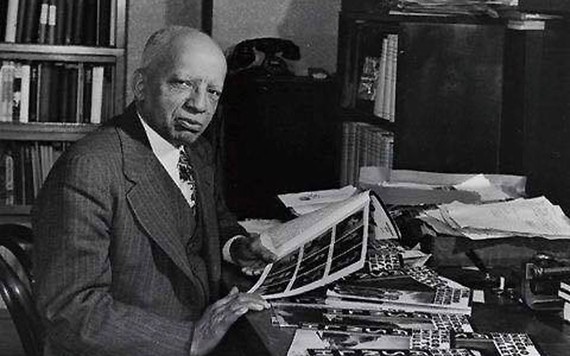 "This is the meaning of Negro History Week. It is not so much a Negro History Week as it is a History week. We should emphasize not Negro History, but the Negro in history. What we need is not a history of selected races or nations, but the history of the world void of national bias, race hate, and religious prejudice. There should be no indulgence in undue eulogy of the Negro. The case of the Negro is well taken care of when it is shown how he has influenced the development of civilization."

February 2016 marks the 90th anniversary of a unique ritual in American and world history. For the next month, America will be challenged to contemplate the global and national journey and achievements of its African-descended residents. The ritual was born and driven by the single-minded devotion and sacrifice of Carter Godwin Woodson (1875-1950), a son of formerly enslaved parents who defied American Apartheid to acquire a Harvard Ph.D., using it with remarkable efficiency to create organizations and rituals that continue to shape our struggle for intellectual liberation.

Contrary to the (sadly) popular joke, February was not "given" to Black America for celebrating our history because it is the shortest month of the year. Woodson chose the second week in February for the celebration of "Negro History Week" because it contained the birthdays of the major symbols of the intertwined fates of Africans and the post-Civil War U.S. nation-state: Frederick Douglass (February 14, 1818) and Abraham Lincoln (February 12, 1809). By February 1926, his Association for the Study of Negro [now African American] Life and History had worked for over a decade to achieve his goal of establishing an independent institutional base for the study and promotion of the history of African people. Joining the creation of the Association eleven years earlier at Chicago's Wabash Avenue Colored YMCA, the creation of the Journal of Negro History (1916) and the Associated Publishers (1921), and followed by the creation of the Negro History Bulletin (1937), "Negro History Week" became another in Woodson's strategies to link the deeper study of Black life to acts of community consensus and coalition building.

Carter G. Woodson was born in New Canton, Virginia on December 19, 1875. His parents, James and Anne Woodson were born into slavery. His father escaped in 1864, serving in the Union army. His mother, whose had seen her own mother and two younger siblings auctioned as a child, ensured that Woodson and his siblings learned to read and write as protection against future oppressions. He left home at 17, working on the railroads and in coal mines until, at age 22, he was able to complete high school and enroll in integrated Berea College in Kentucky. He went on to earn degrees from Berea, the University of Chicago and, in 1912, became the second African (after W.E.B. Du Bois) to take the Ph.D. in history from Harvard University. By then he had relocated to Washington, DC, where he taught at the city's prestigious M Street (Dunbar) and Armstrong High Schools and introduced the first courses in "Negro History" during a brief stint as professor of History and Dean Liberal Arts at Howard University.

By February 1926, Woodson's Association had established "Negro History Week." The celebration afforded Black students, teachers, institutions and organizations across segregated America opportunities to display what they had learned during the previous year's study of what he called "Negro life and history." Four years earlier, Woodson and Charles Wesley had published The Negro In Our History, a wide-ranging textbook that traced the history of African people from the origin of humanity to the present. The Black-owned publishing company's book started the modern era of African American history textbooks that many trace to the appearance of John Hope Franklin's From Slavery To Freedom 25 years later. Woodson believed that integrating factually sound research on the history of African people in both formal and informal educational institutions would aid in the ongoing struggle to transform American and world social, economic and cultural conditions.

In 1976, the Association expanded the weeklong celebration to a month, creating what we now call "Black History Month." As we begin the 90th celebration of Woodson's ritual, even many who have fashioned careers from interpreting Black experiences have sorely misinterpreted his vision and strategies for carrying it out. Several generations hence, the month has become a revenue stream for everyone from television programmers and department store marketers to enterprising "public intellectuals" of all colors and motive.

In the January 1943 issue of the Negro History Bulletin, Woodson gave what is still the best description of the purpose of "Negro History Week." The editorial for that volume reminds its loyal readership of schoolteachers and children, academics and rank and file members of his army of Black onlookers and co-conspirators that "this is the week set aside by the Association for the Study of Negro Life and History for the purpose of emphasizing what has already been learned about the Negro during the year."

Woodson would likely not be surprised by the heady mix of ignorance and free enterprise that now mark the year's shortest month as the locus of discussions of race rather than a brief reflection period for the preceding year's study of Africana. In the March, 1950 issue of the Bulletin, published the month before he died at his 9th street home in Washington, DC, Woodson recognized that many in the Black community had effectively inverted and eviscerated the purpose of Negro History Week, turning it into a convenient cul de sac for engaging in fleeting considerations of "the race problem." In a hard-hitting editorial titled "No Study and Consequently No Celebration," Woodson addressed the problem head on, saying:

"It is evident from the numerous calls for orators during Negro History Week that schools and their administrators do not take the study of the Negro seriously enough to use Negro History Week as a short period for demonstrating what the students have learned in their study of the Negro during the whole school year. These mischievous orators, as it has been said again and again in these columns, have no message which they can connect with the celebration of Negro History Week. About the only thing on the Negro which they know is the traditional discussion of the race problem and how it has been or can be solved." [Negro History Bulletin, Vol. XIII, Number 6, March 1950]

Emphasizing that there were many schools in the country that were, in fact, "tak(ing) the study of the Negro seriously," Woodson nevertheless warned against the encroaching conflation of external definitions of Black life and its possibilities--the idea that our existence would be reduced during February to variations of answers to the question that Du Bois had argued lies behind most recognitions of Black life: "how does it feel to be a problem?

In 2005, the School District of Philadelphia created the country's first mandatory African American history high school course in a major school district. The authors of the course's curriculum framework anchored it in Woodson's vision for institutionalizing many of his approaches to studying African people and the world. Our framework included a series of lessons called "Intellectuals of the African Diaspora," each a self-contained essay with lesson plans and primary source materials that included representative female and male thinkers from every corner of the African world.

We wanted students to enter the mind and work of Black scholar, aligning their own growing curiosity with the questions asked by their intellectual ancestors and seeing themselves as both receivers and producers of knowledge grounded in their experiences. We selected Carter Woodson as our exemplar. The lesson "Carter G. Woodson and the Origins of African American History Month" can be found by clicking here.

If nothing else, Dr. Woodson's life and work demonstrates that the task of the learner, whether as apprentice or fully developed scholar, is to undertake the search for meaning with will, passion, mastery of content and technique, and stamina, to see where the road leads. What is all too frequently missing in the study of African humanity are roadmaps that afford us the ability to engage in that search independently and at once in comparative, interactive tandem with other genealogies and modalities of human meaning.

Shortly after his passing, Woodson's close friend and collaborator, Mary McLeod Bethune published a eulogy in the Journal of Negro History. Her words serve as a fitting reminder of his work as well as of our own responsibility to continue it:

"I shall always believe in Carter Woodson. He helped me to maintain faith in myself. He gave me renewed confidence in the capacity of my race for development, and in the capacity of my country for justice for her own people and for all peoples. With the power of cumulative fact he moved back the barriers and broadened our vision of the world, and the world's vision of us."