For the introduction to this story, and The History of Professional Basketball in San Diego 1967-1972, click here.

After an interesting season where not one but two NBA franchises played various "home" games in San Diego despite calling other cities their home, the city of San Diego was without an NBA team. Enter the San Diego Conquistadors. The NBA had some competition at this point: The American Basketball Association (ABA). Formed in 1967, the ABA featured 10 teams and provided a legitimate basketball option for fans who weren't satisfied with the NBA.

In 1972, two ABA teams folded: The Pittsburgh Condors, and the Floridians. The ABA wanted to keep the league viable with a minimum of 10 teams, and when the Condors and Floridians folded the league suddenly was left with nine franchises. For the first and only time in the league's history, the ABA decided to have an expansion team. Given the San Diego Rockets had recently relocated to Houston, the ABA offered the city an expansion franchise in exchange for a $1 million entry fee.

The fee was paid for by Leonard Bloom, a dentist who was also the President and CEO of the United States Capital Corporation. The team was referred to as the "Q's" and immediately upon its inception had a problem: They didn't have an arena to play in because Bloom had a feud with Peter Graham, the manager of the Rockets and Warriors' previous home, the San Diego Sports Arena. Graham was angry that the ABA granted the expansion franchise to Bloom and not him. Since the Conquistadors were locked out of the San Diego Sports Arena, they had to play their home games during the franchise's inaugural season at Peterson Gymnasium, which is still located on the campus of San Diego State University. 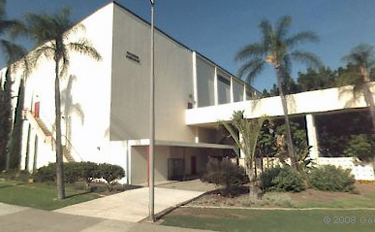 The franchise didn't hold back on splurging for big names. In their debut season, the Conquistadors hired K.C. Jones as their head coach, who is currently in the NBA Hall of Fame for winning an astounding 11 world championships as a player, assistant coach, and head coach for the Boston Celtics. This in addition to winning two NCAA championships and an Olympic Gold Medal as a player. 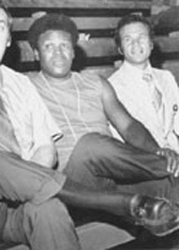 The following season, the San Diego Conquistadors made perhaps their biggest splash of all. They signed future Hall of Fame NBA center Wilt Chamberlain to a three-year, $1.8 million contract as their player and coach. The Los Angeles Lakers sued Chamberlain, claiming he wasn't allowed to play on another team because they still had him under contract from his playing career with the Lakers. The Lakers claimed that they owned the option year on his contract. The judge agreed with the Lakers, deciding that Chamberlain was only allowed to play for the Lakers. The judge did allow Chamberlain to coach though, and in that one season as head coach he led the Conquistadors to a 37-47 record. Chamberlain is more notoriously known that year for missing numerous games and assigning assistant Stan Albeck to handle most of the day-to-day operations, including decision making during games. Chamberlain would often miss games to promote his autobiography Wilt: Just Like Any Other 7-Foot Black Millionaire Who Lives Next Door and sign autographs of his book. 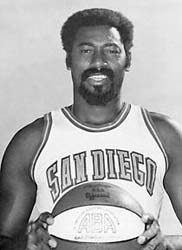 When the Conquistadors announced the signing of Wilt Chamberlain, they immediately distributed photos of him in a uniform. Copyright sportsecyclopedia.com

That second season for the Conquistadors, the team played their home games in a confined downtown ballroom called Golden Hall. Bloom had proposed a $200 million development plan in Chula Vista that included a 20,000 seat arena. Wilt Chamberlain wouldn't go to Chula Vista to campaign for the arena's approval, saying, "If I have to go there, they can't want it very much." The proposal went to a special referendum and failed by a mere 294 votes out of 19,000 cast. 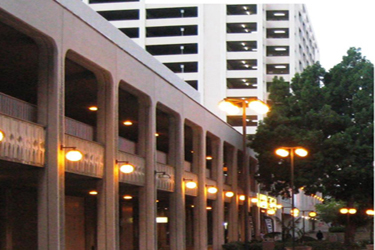 That season would be the last as a player or coach for Wilt Chamberlain, who retired after the 1973-1974 season. It would also be the last season that the Conquistadors wouldn't have the San Diego Sports Arena as their home. Bloom made arrangements to have the team play their home games there in the 1974-1975 season. 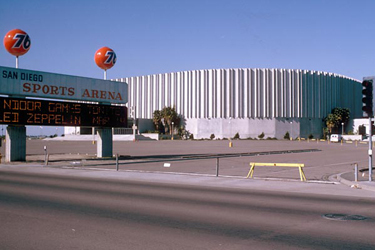 Having a legitimate arena to call their home didn't improve the Conquistadors' ABA record. That third season, the Conquistadors finished with a 31-53 record and missed the playoffs. Bloom sold the franchise following the season to Frank Goldberg, the former co-owner of a successful Denver Nuggets team. Goldberg would rename the team the San Diego Sails and started anew with logos, uniforms, and even the team roster.

For one season, San Diego had a professional basketball team called the San Diego Sails, named after the prevalent Southern California sailing community. This was also the final season of the ABA, which was mired in financial difficulties. During the season, the ABA was in discussions with the NBA about a potential merger, and it was revealed that Los Angeles Lakers owner Jack Kent Cooke disapproved of the Sails being a part of the merger because he reportedly saw them as a threat to the Southern California media market and didn't want an attention taken away from his Lakers.

With dismal attendance figures at the San Diego Sports Arena, and little hope for the franchise to have a league to play in, Goldberg folded the team and closed shop on November 12, 1975. The Sails would win their final home game, a victory over the favored San Antonio Spurs on November 2, 1975, where only 1,670 attended the game. The ABA had to reschedule the entire season after the Sails went out of business. The four surviving franchises of the ABA who would join the NBA were the San Antonio Spurs, Denver Nuggets, New York Nets and Indiana Pacers.

Two years after the Sails folded, professional basketball was to return for the final time to San Diego. This time in the form of the Buffalo Braves, an NBA expansion team who played in Buffalo from 1970-1978. The owner of the Braves at the time of the move was Irv Levin, who previously owned the Boston Celtics. A Southern California native, Levin was a film producer who swapped his ownership with the owner of the Braves because he wanted to move his franchise to Southern California and the Celtics were too established, and storied, in Boston to relocate from the city.

Among the first orders of business was coming up with a new nickname for the franchise. The Braves didn't have much resonance with San Diego, so the team held a contest to have fans help decide the new nickname of the team. It was decided that the Braves would become the Clippers, named after San Diego Bay's prevalent sailing community.

Similar to the Conquistadors, the Clippers wanted to make a big splash upon arriving to San Diego. The Clippers signed free agent World B. Free, who finished second in the NBA that season in scoring, averaging 28.8 points per game. The Clippers played their games at the San Diego Sports Arena for the duration of their time in San Diego. 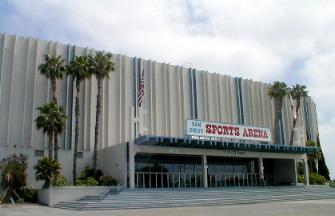 In their second season, the Clippers signed San Diego native Bill Walton to the team. In five season playing for the organization, Walton played a total of 169 games. Due to a variety of foot injuries Walton missed 59 percent of the team's games, averaging 34 games played per season. On May 4, 1981, Levin sold the Clippers to Los Angeles lawyer and real estate developer Donald Sterling, who purchased the team for $12.5 million. When Sterling bought the team, San Diego fans were optimistic given Sterling's promises of spending good money to improve the team and his roster.

In the Clippers' six seasons in San Diego, they compiled a record of 186-306, routinely finishing at or near the bottom of the Pacific Division. With dismal attendance numbers at San Diego Sports Arena, Sterling this time successfully moved the Clippers franchise to Los Angeles in 1984, thus ending any affiliation of professional basketball with America's Finest City, San Diego.