When the Houston Rockets and the Los Angeles Clippers advanced past the opening round of the 2015 NBA playoffs to play each other in the Western Conference semifinals, it was somewhat surprising that there was nary a mention from sports journalists and fans alike of the franchises' histories in San Diego.

The series easily could have been given the moniker "San Diego Series", given the Rockets were established in San Diego in 1967, and the Clippers relocated there in 1978 after forming in 1970 as the Buffalo Braves.

Then again, maybe the reason why their histories in San Diego were forgotten is because of the general apathy San Diego's populace has towards their professional sports teams. San Diego is a very transient metropolitan area, due primarily to a strong military presence that results in a lack of embedded family roots, and an abundance of affluent residents who transplanted there from other parts of the country primarily because of the weather.

And it's difficult for a community to maintain passion and support for professional sports franchises who have literally never won a championship. San Diego has gone 103 seasons without any of their teams winning a title, which amazingly leads the entire continent of North America in championship droughts. Ethan Strauss, a writer for ESPN.com who covers the Golden State Warriors, is presumably from San Diego given these series of tweets he posted that perhaps best captures San Diego's ambivalence towards their professional sports teams.

San Diego is the most stricken sports city, but nobody cries it a river because it's next to the ocean

While the focus of San Diego sports centers on its NFL franchise, the San Diego Chargers (who have been threatening to leave the city for years if they don't get a new football stadium), and their MLB franchise, the San Diego Padres (who play in a beautiful downtown baseball stadium, Petco Park), the city surprisingly has a compelling and rich professional basketball history that not only spans from 1967 - 1984 (with a two year gap from 1976-1978), but also has a direct connection with one of the participants of the 2015 NBA Finals, the Western Conference champion Golden State Warriors. The following is the history of professional basketball in San Diego.


It's easy to make the assumption that the Houston Rockets got their nickname because of the city's prominent aerospace industry, including NASA's Johnson Space Center. Yet the Rockets nickname actually originated with the team's first home. San Diego was where NASA's Atlas Rockets were made.

The San Diego Rockets were an NBA expansion team. They joined the NBA in 1967 alongside the Seattle SuperSonics. They played all their games in the San Diego Sports Arena, which is now called Valley View Casino Center. 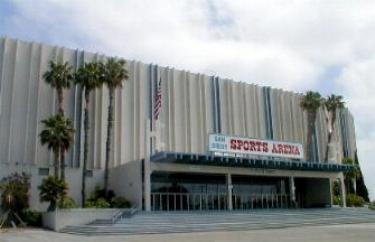 The American Basketball Association (ABA) debuted that same year, adding to slim pickings in the overall talent pool as players were dispersed amongst new teams. This added to the struggles of the Rockets franchise, who posted a record of 119-209 in their four years playing in San Diego. The Rockets did make the playoffs in their second season thanks in large part to their talented rookie, and future Hall of Famer, Elvin Hayes, who led the NBA in scoring that season and remains the most recent rookie to lead the league in scoring. 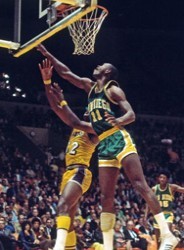 NBA Hall of Fame coach Pat Riley was also a member of the San Diego Rockets, having been drafted prior to the team's inaugural season. Riley played for the Rockets for three years before being taken by the Portland Trailblazers in an expansion draft, then immediately after traded to the Los Angeles Lakers where he helped them win the world championship. 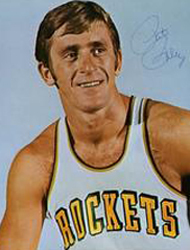 San Diego hosted the NBA All-Star Game in 1971, the Rockets' final season in America's Finest City. The game, played in the San Diego Sports Arena, was won by the Western Conference All-Star team 108-107. The following off-season, the team's owner, Robert Breitbard, decided to sell the team due primarily to poor attendance figures and difficulty paying rent at the San Diego Sports Arena. A group of investors, including real estate broker Wayne Duddleston and banker Billy Goldberg, bought the team for $5.6 million and moved the team to Houston.

The team had an issue though; they didn't have an arena to play in. During their inaugural season in Houston, the Rockets played in various venues and also traveled to different cities for their home games. The Rockets hosted home games in Waco, San Antonio, Albuquerque, and even played two games in San Diego in 1972 to reduce their amount of travel on the west coast.

Peter Hartlaub of the San Francisco Chronicle recently unearthed a remarkable San Francisco Examiner newspaper article from 1971 that provided information about the origins of the "Golden State" moniker of the Warriors franchise.

The Warriors organization was originally established in Philadelphia, where they formed in 1946. In 1962, the franchise moved to San Francisco and became known as the San Francisco Warriors. They played in various arenas, including the Cow Palace and the San Francisco Civic Auditorium, before playing most of their games in the Oakland Coliseum Arena (which is now known as Oracle Arena and remains the home of the Warriors) when it opened in 1966.

In 1971, the San Diego Evening Tribune reported that the San Francisco Warriors were renaming themselves the "Golden State" Warriors and were going to split their home games between Oakland and San Diego. This was shortly after the San Diego Rockets announced that they were relocating to Houston. The Warriors renamed themselves because, literally, they were going to be California's basketball team given they were planning on splitting their home games between Northern and Southern California and the term "Golden State" is California's official nickname.

The Warriors General Manager at the time, Bob Feerick, emphasized though that the decision wasn't final and team owner Franklin Mieuli announced a short time later that the Warriors would play the majority of their games in Oakland. It's speculated that the announcement was made to generate more interest in the Bay Area for the Warriors.

Even more interesting is that two of those games were against the same Houston Rockets who had recently moved from San Diego. The contests counted as home games for both teams. The city of San Diego incredibly then had not one, but two NBA franchises playing their homes games in San Diego during the 1971-1972 season. On November 21, 1971, the Warriors and the Rockets played the first of two home San Diego games. 6,297 people attended the game that was won 115-96 by the Rockets. In the rematch, on March 3, 1972, the Warriors beat the Rockets in front of 6,264 fans presumably at the San Diego Sports Arena 108-107 to split the San Diego games.

Part two of this story, The History of Professional Basketball in San Diego 1972-1984, coming soon.