We know that there's been a significant amount of job loss in New York, especially in the publishing and finance industries. Many people have been driven by necessity as well as choice to become freelancers or entrepreneurs - consultants, small business owners, technologists, writers - who are making their own paths versus looking for jobs. Many people welcome the autonomy and flexibility of freelance work, but also yearn for the social networks and support services that they had in a workplace. Working at your dining room table or the local coffee shop can be lonely. The Hive at 55 meets many of those needs and is becoming a community as well as a workspace for freelancers.

The Hive at 55 was created by the Alliance for Downtown New York with support from the NYC Economic Development Corporation, and was included in Mayor Bloomberg's MediaNYC 2020 plan, a program of eight initiatives to strengthen the media industry. Located at 55 Broad Street in Lower Manhattan, The Hive offers a shared workspace for up to 40 people, three private offices, meeting spaces and amenities such as a lounge, coffee, conference rooms and bike storage. There are fax, printer and copy machines and WiFi - the basics people need to get through a work day - as well as workshops, happy hours and networking opportunities. The Hive opened on December 1, 2009, and the word is still getting out, so they have room for more members.

Director Daria Siegel is an employee of the Alliance for Downtown New York who collaborated on creating the concept and building the business plan for The Hive. She ultimately transitioned from her urban planning role to that of leading this new venture. The building where it's housed is owned by Rudin Management Company; Bill Rudin is a board member of the Downtown Alliance who moved quickly to provide this space.

Rates for using the space are very reasonable and start at $25 a day. There are a range of fees, starting with the basic plan for 3 days a month up to use of the space for 24/7 access for a month. There are also a limited number of private offices. When you compare the daily cost to that of renting space in a commercial building for a single person office, the savings are immediately obvious and significant.

The day that I visited, the mix of people working at The Hive included a travel agent, several "techies," a handful of new venture CEOs and another free-lance writer. There's a bright, sunny room with large communal work tables providing places to plug in a laptop, where people can have quiet conversations in addition to doing focused work on their computers. The environment is friendly and informal but supportive of serious work. People are clearly respectful of their co-workers' "space," but the overall feeling is one of communality - a balm for the isolated soul. 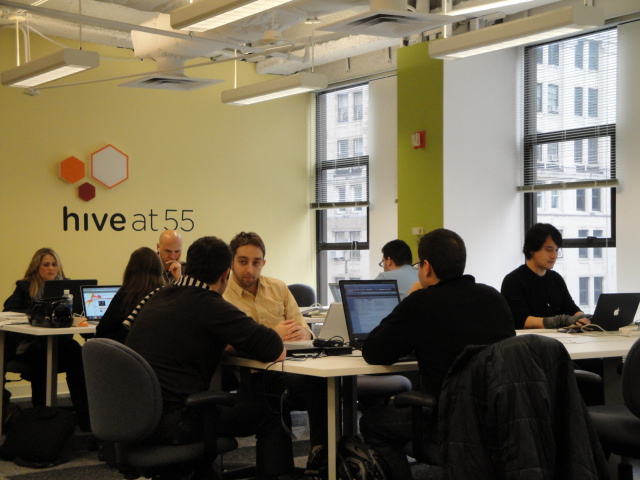 Here are two of the people I met during my visit:

Nicole G. Anderson is a freelance reporter who covers fashion, beauty and design. She used to work as a copywriter in an advertising agency but pursued her passion for writing after taking some time off to work for Obama in Ohio. She now writes for a number of publications, including Daily Candy and a Lebanese fashion magazine. She started with a three day a month membership at The Hive but has recently increased it to eight days a month. "About a year ago, I began checking out some of the other workspaces available to writers in the city. I found that I wanted to be somewhere that's a bit more social, with a networking element to it, and The Hive fits my needs really well. I still work at home when I need silence to write, but I like to do research and interviews here, with other people around me."

Michael Aiello is an entrepreneur, the founder and CEO of DIFRwear, a company that designs and manufacturers RFID blocking apparel to prevent identity theft. Aiello is a graduate of Polytechnic Institute of NYU (formerly Brooklyn Polytechnic) and started his business while still an undergraduate. He's currently pursuing a one year MBA at Oxford University's Saïd Business School in the UK, so he came to The Hive to have a workspace to use during the quarterly visits he makes to New York. "I learned about this in a networking group for entrepreneurs called "NextNY" - The Hive is an ideal place for me to plug in when I'm back in the city."

According to Daria, "In addition to being a great deal and a functional place to work, The Hive provides the opportunity to network and to feel like part of a work community again, something that's very important to people. The fact that we have people from a variety of businesses here means, for example, that someone who needs an accountant can be introduced to a person sitting at the next table."

Friendships as well as business relationships have emerged for people who work here consistently.