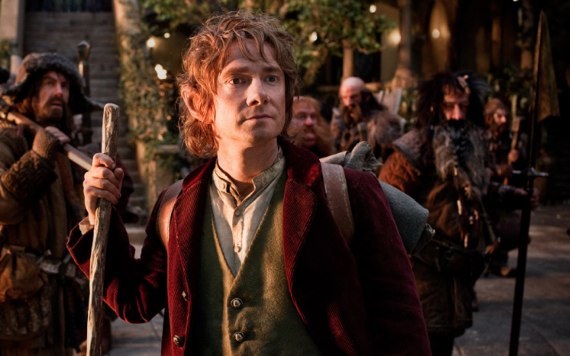 Yes, there's a new Hobbit movie coming out soon. (The first of three Hobbit movies, actually.) But, most of the buzz -- both good and bad -- stems from the fact that The Hobbit: An Unexpected Journey will be shown on a special kind of film with a rate of 48 frames per second. Truth be told, I had no idea what this meant when it was first announced. I've since learned that, to put it simply, viewers long accustomed to seeing 24 frames every second will see twice that many when they watch The Hobbit: An Unexpected Journey. Over the summer, I spoke to Peter Jackson at Comic-Con and he mentioned that it takes the eye a few minutes to adjust to the frame rate. Having seen the entire film in 48 FPS, I know what he meant -- and my feelings about the format are very mixed. With all that in mind, I'm just going to go ahead and answer every question I had about the format before seeing it for myself.

Q: How does the 48-FPS format differ from most other films?

A: It has twice as many frames per second. This gives it an incredibly clear picture. Which is part of the problem.

Q: Why would a clearer image be a problem?

A: Because, as it turns out, it's possible for an image to look so clear that it no longer looks real. Or so real that it takes you out of the film. As in: that film set looks like ... a film set. Put it this way: the picture is so clear that in one scene I could see Ian McKellen's contact lenses. I won't claim to be a Tolkien expert, but I am pretty sure Acuvue does not exist in Middle Earth.

Q: Did you enjoy watching The Hobbit: An Unexpected Journey in 48 FPS?

A: Yes and no, for completely different reasons. I'll admit, it was fascinating to watch a movie in 48 FPS because, honestly, I've never seen anything like it. Ever. So, from a technology standpoint, I enjoyed it quite a bit. But! To the extent that I simply wanted to watch a movie and be immersed in another world, it was distracting.

Q: How was it distracting?

A: Granted, this could be related to my own attention-deficit issues, but I was often taken out of the story because I just wanted to look at things. There's a scene that takes place in Rivendell in which Gandalf (McKellen) and Galadriel (Cate Blanchett) are having an important conversation near a waterfall -- but all I could do was stare at the waterfall. It was so pretty. I mean, I could see each and every droplet of water coming out of this waterfall. All I wanted in the world was to drink from this waterfall. Of course, with all of my attention drawn to this waterfall, I missed most of what Gandalf and Galadriel were talking about.

Q: So everything in the film looks beautiful at 48 FPS? This sounds like a good thing.

A: Well, not so fast. Quite a few things don't look great in 48 FPS. Most of the scenes that take place outdoors look fantastic, but indoors it was difficult to stop being conscious of the fact that we were staring at a movie set. And the scenes that were heavy on CGI yielded mixed results.

Q: Speaking of CGI, how does Gollum look in 48 FPS?

A: Absolutely outstanding. The close-ups of Gollum's face were stunning. But, unfortunately, a scene featuring Radagast the Brown, on a sled powered by rabbits fleeing an approaching Orc army, looks quite terrible. The screen is so clear, it rendered the CGI in the scene (which was shot from a distance) into something that looked a lot like a game of Duck Hunt.

Q: Is Peter Jackson right that, even if it takes some time to get used to watching a film in 48 frames per second, you eventually do grow accustomed to it?

A: Yes and no. First, never once did I not notice that I was watching a film in a different format. Sometimes this is a good thing and sometimes this is a bad thing. But the most troubling aspect was that the first 10 minutes of the film looked sped-up.

A: Have you ever watched old footage of Babe Ruth running the bases back in 1927? Well, imagine that, only with the clearest picture that you've ever seen. After my screening, I talked to other writers who had noticed the same thing. My understanding is that it took our brains a few minutes to adjust to the new format, and this was the resulting sensation. It's really quite a trip -- because it's not like the voices are sped up. And the voices certainly sync with the video, but, still, everything looks fast. Then, after a few minutes, the speed returned to normal.

Q: Will watching more films in 48 FPS alleviate this issue?

A: This was a topic of conversation after the film. It seems natural to assume that our eyes will learn to adjust more quickly as we see more and more films in 48 FPS, but it's possible that it will always resemble the sensation of having a flashlight shined in your face in an otherwise dark room.

Q: Does 48 FPS have a future as a commercially viable format?

A: Maybe? It really depends on the eye thing.

Q: Should I see The Hobbit: An Unexpected Journey in 48 FPS or 24 FPS.

A: Honestly, if you're curious about the technology, see it in 48 FPS -- if only to see something you've never seen before. But if you're just a fan of the Lord of the Rings trilogy and you want to watch The Hobbit without any distractions, see it in 24 FPS.

Q: Oh, how is The Hobbit: An Unexpected Journey as a movie?

A: Well, briefly: it's no doubt fun to see these characters again, but the movie isn't quite as good as any of the individual The Lord of the Rings movies. It hits a lot of the same notes as The Fellowship of the Ring (there is a lot of walking from one location to another), and Martin Freeman as Bilbo Baggins is quite great. But aside from Ian McKellen as Gandalf, the supporting characters are less interesting this time around. Still, as a fantasy adventure film, it's certainly entertaining. Put it this way: it felt about 45 minutes shorter than its nearly-three-hour running time -- and, no, that has nothing to do with 10 minutes of that time spent with an illusion of warp speed.