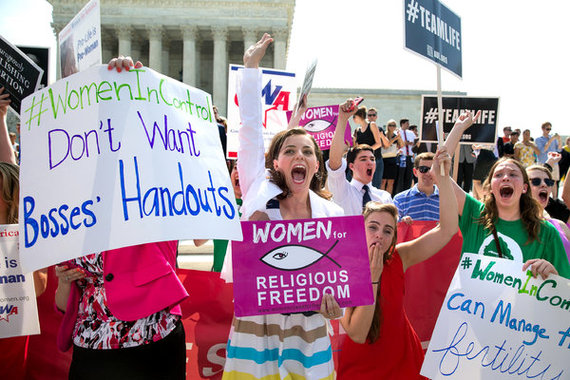 The Christian Science Monitor summed up the Hobby Lobby decision by explaining, "The US Supreme Court ruled on June 30 that the owners of closely-held, profit-making corporations cannot be forced under the Affordable Care Act to provide their employees with certain kinds of contraceptives that offend their religious beliefs." As a result, Justice Ruth Bader Ginsberg's dissent highlighted how the term "religious freedom" can mean different things to different people:

Would the exemption... extend to employers with religiously grounded objections to blood transfusions (Jehovah's Witnesses); antidepressants (Scientologists); medications derived from pigs, including anesthesia, intravenous fluids, and pills coated with gelatin (certain Muslims, Jews, and Hindus); and vaccinations[?]...Not much help there for the lower courts bound by today's decision...

Approving some religious claims while deeming others unworthy of accommodation could be 'perceived as favoring one religion over another,' the very 'risk the [Constitution's] Establishment Clause was designed to preclude.

The court, I fear, has ventured into a minefield.

This minefield was evident immediately after the Supreme Court ruling, when the Los Angeles Times wrote that, "The day after handing down the Hobby Lobby decision on Monday, the court issued orders pertaining to six pending cases in which employers claimed religious objections to all contraceptive services required under the Affordable Care Act."

Yes, all contraceptive services, not just the ones contested by Hobby Lobby.

Thus, what was done in the name of protecting religious liberty inevitably turned into a tweet from one conservative pundit stating, "My religion trumps your "right" to employer subsidized consequence free sex." This statement alone speaks volumes and highlights exactly what Justice Ginsberg and millions of Americans feared from the Court's ruling.

Essentially, anyone's religion can "trump" another person's "right" to a great number of things. For example, cows are sacred to Hindus, so hypothetically, what's to stop a devoutly Hindu family who owns a corporation from denying employees medicine? According to the Supreme Court, future employees in this scenario could possibly be denied drugs made from cattle. Oklahoma State University describes a plethora of medicines that are made from cattle byproducts, including one that is essential to the livelihood of millions of Americans:

Insulin is perhaps the best-known pharmaceutical derived from cattle. There are 5 million diabetics in the United States, and 1.25 million of them require insulin daily. It takes the pancreases from 26 cattle to provide enough insulin to keep one diabetic person alive for a year.

If the recent Supreme Court ruling is unbiased enough to respect the beliefs of devout Hindus, then they too should receive the same privilege as Hobby Lobby. Thus, their corporation would be exempt from potential ACA mandates pertaining to insulin and the 100 other medicines derived from cattle. Sorry 5 million American diabetics, sometimes religion trumps healthcare, as the Hobby Lobby ruling illustrates.

Also, the various ways in which religious beliefs can be interpreted through the lenses of healthcare needs are endless and we should never have been put in this position by the Supreme Court. Alas, for all the talk by conservatives on religion and the Founding Fathers, PBS cites Thomas Jefferson's letter to the Baptists of Danbury, Connecticut as an example of the "wall of separation" that exists between religion and government in the U.S.:

Believing with you that religion is a matter which lies solely between Man & his God, that he owes account to none other for his faith or his worship, that the legitimate powers of government reach actions only, & not opinions, I contemplate with sovereign reverence that act of the whole American people which declared that their legislature should "make no law respecting an establishment of religion, or prohibiting the free exercise thereof," thus building a wall of separation between Church & State.

The wisdom of Thomas Jefferson is timeless and he is absolutely correct in that religion is between "Man & his God." Sadly, conservatives in our country have tried to make religion an issue of you and "their God," or them and your body. Furthermore, no laws are allowed to bolster any religions over another, nor can the government deny anyone the freedom to worship as they choose. This used to be what religious freedom was about; now it means the ability to "trump" another person's rights.

The truth is that we have a "wall of separation" in this country that has always existed before the Hobby Lobby decision, at least in the respect of legislating religious doctrine. Unfortunately, the latest ruling allows for unlimited interpretation of both legal and religious doctrine; poking dangerous holes into Jefferson's "wall of separation." The New York Times summarizes the potential for the Court's logic to interfere with the lives of every American:

If the court follows the logic of its Hobby Lobby decision in the decades to come, it's not so hard to imagine a job market where people must interview employers about their religious and political views. Or where people who need to make a living may just feel compelled to accept a work environment increasingly shaped by their employers' beliefs.

The future where religion "trumps" a job seeker's right to be hired without discrimination could be a reality due to the Court's decision. If a corporation can sincerely claim that hiring a gay Jewish atheist (Christopher Hitchens was only a Jewish atheist) is against the religious beliefs of its shareholders, what's to stop them from referencing the Hobby Lobby ruling?

What began as a battle against reproductive rights under the guise of religious freedom could turn into a war of interpretation. Since God hasn't come down from heaven to claim one religion over another, it's anyone's guess as to how human beings will interpret their own religious views. The Hartford Institute for Religious Research estimates that there are around 350,000 church congregations in the U.S. and about 12,000 non-Christian congregations. Considering that even GOP nominee for president Mitt Romney had to deal with anti-Mormonism, it's safe to say that there isn't "one" Christian outlook in the U.S. Also, factor in religions like Judaism and Islam that share similar dietary and other traditions, and it's not unimaginable that multiple religions could form coalitions; especially if corporate shareholders can claim their shared religious beliefs might be threatened.

Whereas Thomas Jefferson wrote his letter to the Baptists of Danbury, Connecticut to reassure minority religious groups that all Americans had the right to worship their God, today "religion freedom" is now a thinly veiled euphemism. Worshipping God is a private matter that shouldn't interfere with the ability of woman of a different religion or an atheist to receive all the birth control methods she requires. Furthermore, one's religion should never interfere legally with the personal habits of another person; even if those behaviors pertain to eating horribly, smoking, hiking in dangerous terrain, and especially sexual activity.