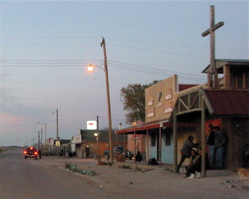 Frank LaMere, human-rights advocate, executive director of Four Directions Community Center, in Sioux City, Iowa, and member of the Winnebago Tribe of Nebraska, sent me this prose poem and, with his permission, I share it with you here. -- Stephanie Woodard

His father told him it was a forlorn and fearful place, where you could see life but no willingness to live and where ghosts beckon their relatives and the weak to leave this creation lest their suffering be prolonged...

His father told him of grandfathers and grandmothers who have been lost and of the generations to come, whose fate has been sealed by those who would watch them die slowly as they hurry away...

His father told him to walk among them in this season as they celebrate his being, to make them smile and let them know he has not forgotten them for even one second...

His father bid him go to Whiteclay and be with them as they await brothers and sisters who will care for them...

Jesus went to Whiteclay and found all there to be freezing, beaten, dying and forsaken. Jesus cried and through his tears saw it to be the holiest of places.

He remains there, walking among the lonely and sleeping outside, as he slept on the night he was born. Jesus is there this Christmas season, huddled by a building, waiting for someone to recognize him, if even for one second.

You will see him if you wish to. He will be the most pitiful among all those gathered. He always has been, and we have always known that.

FOR MORE: If you'd like to learn about Whiteclay, a Nebraska town with six or so permanent residents and four liquor stores that sell approximately four million cans of beer a year, almost entirely to Oglala Sioux Tribe members from the adjoining dry Pine Ridge Indian Reservation, go to the website for Battle for Whiteclay, the award-winning documentary by filmmaker Mark Vasina. According to LaMere, who cooperated with Vasina in the making of the movie, Whiteclay is a source of crime and social devastation as well as liquor for Pine Ridge, which straddles the South Dakoka/Nebraska border.

Offenses committed in the town over the years have reportedly included murder, rape, assault, trading of sex for alcohol, drug dealing, soliciting, liquor sales to underage and intoxicated customers, illegal on-premises and public drinking, harassment by paid toughs, selling of stolen goods, food-stamp fraud, and bootlegging of liquor onto the reservation, where most crime is alcohol-related. Through all of this, the state of Nebraska has refused to yank the stores' licenses and authorities there appear to have rarely investigated, much less prosecuted, even the most serious crimes. Indeed, protest marches originating in Pine Ridge and demanding a shutdown of Whiteclay have been met in Nebraska by heavily armed police in riot gear.

"Over the years, thousands have died and thousands of children have been orphaned, thanks to Whiteclay," said LaMere. He also noted that the town generates millions of dollars in annual profits for its storeowners, along with hundreds of thousands in taxes each for the state and federal governments. "If anything like Whiteclay occurred in Omaha or Lincoln, it would be fixed immediately. And if Whiteclay were brought under control, it would call into question every reservation border town like it nationwide, and that would change the face of Indian country."