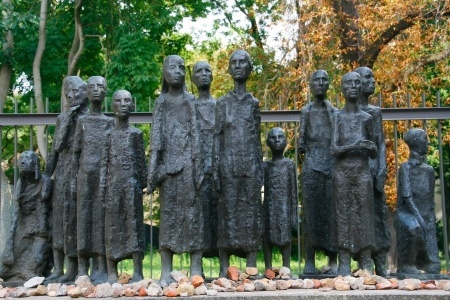 For not only was the Holocaust an historic event, one that touched the lives of countless people and nations, it also was an event that leaves specific echoes in the minds, bodies, and psyches of Jews today. For this reason, referring to the Holocaust should be done with care and sensitivity for the specifics of this history, as well as the Jewish people.

However, this is often not the case. The use of the terms "Holocaust," "Nazi," and the name "Hitler" are used, particularly in our political discourse, whenever people want to brand their opponent as evil and incite the wrath of their allies, at the expense of any further dialogue or critical examination of the ideas that offend them. For example, politically conservative voices have announced "Liberals are the new Nazis;" that Obama's gun control proposal will be "like Nazi Germany;" and that Obama playing golf with Speaker Boehner is like "Hitler playing golf with Netanyahu."

To be fair, it's not only right-wing enthusiasts who step on the sacred stones of Nazi victims; left-wing enthusiasts do the same. For example, Governor Nikki Haley has been likened to Eva Braun, and Paul Ryan's National Convention speech was referred to as "Nazi propaganda." In fact, the offenders reach way beyond our political rhetoric and are too numerous to account here.

There are three problems with the unconscious and casual use of this language. First, it ignores the Jewish identity of many of the Holocaust victims. Referring to the Holocaust triggers specific memories, trauma, and reactions in Jewish people; but when the Jewish identity of many of its victims is ignored, these memories, reactions, and trauma also are ignored. In addition, ignoring the Jewish identity of Holocaust victims encourages the culture at large to think of the Holocaust as a kind of evil disconnected from the plight of Jews desensitizing them to the trauma Jewish people experienced and are still processing. Thus we have analyses of the mid-East conflict without reference to the trauma of the Holocaust; we have people who think Jews are greedy without reference to the history of Jews being routed into banking professions because it was considered dirty by Christians; and both Jews and non-Jews alike have little appreciation for Jewish hatred and self-hatred in post-Holocaust America.

Neglecting the identity of the Nazi's victims creates a culture of forgetfulness about specific Jewish injury and trauma. As a therapist, I have learned that many Jews internalize this insensitivity by similarly ignoring or disavowing the connection between their personal suffering and their Jewish identity. As a result, Jews can suffer from various symptoms, both psychological and physical, which they believe are manifestations of their personal problems or pathologies, instead of thinking these symptoms are a result of unprocessed Jewish trauma related to the Holocaust. (1)

In fact, most Jews make no connection between their particular suffering and their Jewish identity. In short, they ignore their specific history and instead quarantine themselves off into a kind of "inner ghetto," thinking something is wrong with them -- a form of Jewish shame. (2)

Second, it dismisses the anti-Semitic roots of the Holocaust. The Holocaust was not only a terrible act of violence; it was also terrible act of hatred against Jews. Referring to the Holocaust, Nazis, or Hitler, divorced from any analysis or discussion of Jewish hatred, promotes blindness to anti-Semitism today and discourages critical thinking about it amongst Jews and non-Jews alike. Desensitizing people to anti-Semitism makes it less likely that people will recognize its current practice in the form of humor, preferences for non-Jewish styles of communication, stereotypes about Jewish behavior, or biases about physical attributes (e.g., skin color, nose shape, or hair texture).

Further, if Jewish people do speak up to challenge the offense, they must identify themselves as Jews and risk being subjected to stereotypes about Jewish paranoia and pushiness. When anti-Semitism goes unnoticed and unchallenged Jews are more likely to be self-critical, fearful, depressed, disempowered, or highly sensitive and never think that these symptoms result from being injured by other people's prejudice. (3) Again, an inner ghetto is created, this time to contain reactions to prejudice. And again, Jews are likely to think something is wrong with their reactions -- another form of Jewish shame.

Third, it minimizes the magnitude of the injury perpetrated by the Nazi regime. A person with a paper cut ought not be equated to a person maimed in a traffic accident; a person slapped in the face ought not be equated to a person beaten with a belt or whip. Comparing the Holocaust to actions or events that either injure no one, or cause injuries that are hardly comparable, minimizes the injury Jews suffered in the Holocaust. When this kind of comparison regularly occurs and goes unnoticed, Jewish people internalize this perspective and learn to minimize their own injury and the magnitude of the efforts required to heal that injury. This minimization causes many Jews to believe that the strength of their feelings, opinions, and reactions to insult are disproportionate and inappropriate. In fact, one Jewish stereotype suggests that Jews have a tendency toward hypochondria, as if they are pathologically over-concerned or making too much of' their suffering. Again, Jews end up thinking something is wrong with them and ghettoizing the magnitude of their suffering, opinions, and feelings -- a final form of Jewish shame.

The trauma caused by the Holocaust still resonates in the Jewish psyche, causing symptoms physically, emotionally, as well as in their relationships and families. (4) Casual evocation of the Holocaust, without bearing witness to the Jewish nature of the injury, the dismissal of its magnitude, and the anti-Semitic ideology held by its perpetrators renders the historical trauma invisible, cloaking much Jewish suffering in a veil of shame. The same dynamics exist for Gypsies, the disabled, as well as homosexuals and transsexuals who were also targeted and murdered by the Nazi regime.

Further, all traumatic injury, including that of abused children, soldiers at war, women violated, and people who have been maligned because of their race or group identity, evoke the dynamics of dismissal, denial, and shame. It is the job of all of us to bear witness to these traumatic events and call for greater understanding for the nature of these events and care for the victims. When we do not, we fail to recognize and account for not only the 42,500 Nazi camps and ghettos from more than half a century ago, but also our "inner camps and ghettos" built out of the denial and ignorance of the trauma which still resonates with many today.

[1] In conversation with Jewish psychologists Dawn Menken, Ph.D., author of Raising Parents, Raising Kids: Hands-on Wisdom for The Next Generation, and Gary Reiss, Ph.D., author of Beyond War and Peace in the Arab Israeli Conflict.
[2] Ibid
[3] Ibid
[4] Ibid