If numerous Holocaust-related movies from the 1970s through the '90s were directed by children of survivors, The Flat represents the cinematic efforts of the third generation -- the grandchildren of the European Jews who did not die according to Nazi plan. And if the Shoah was rarely foregrounded in Israeli movies between 1950 and 2000 -- not surprising for a country forging an identity of strength rather than victimhood -- the subject is now increasingly explored onscreen.

A "home movie" that turns into an engrossing investigation, The Flat is a fascinating documentary by Arnon Goldfinger, opening today at the Lincoln Plaza as well as the IFC Center in New York. His voice-over begins in the Tel Aviv apartment of his recently deceased grandmother Gerda, and takes us on a journey (geographically to Germany as well as temporally to the 1930s). Like David Fisher's Six Million and One -- a personal documentary released theatrically in late September -- The Flat explores a family in Israel whose European roots lead to larger questions of cultural identity and a past filled with contradictory secrets.

The title refers to the grandmother's apartment, where the family goes through Gerda's
possessions -- many from her native Berlin. Arnon's tough mother Hannah shows scant interest in her maternal heritage, and when Arnon interviews his siblings, they know little about Gerda. His quest takes shape after he finds copies of a Nazi newspaper from 1934, about a trip to Palestine by Nazi official Baron Von Mildenstein, accompanied by a Jewish judge. The latter was Gerda's husband Kurt Tuchler. The two couples not only traveled from Berlin to Palestine together, but apparently remained close friends, even after the war.

Arnon learns that this high-ranking member of the SS later recruited Adolf Eichmann into the Dept. of Jewish Affairs, and the film includes footage of the Eichmann Trial, where -- from the glass booth -- the Nazi criminal mentions Von Mildenstein as one of the architects of the forced emigration of Jews from Germany. 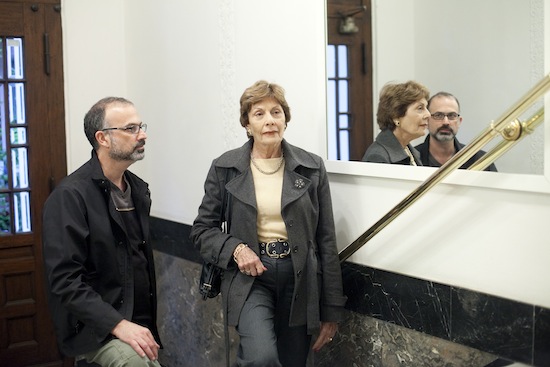 The heart of The Flat is, ironically, Edda von Mildenstein. Arnon finds the daughter of the Baron and visits her in Wuppertal. Her ongoing -- if tense -- relationship to the past is counterpointed with Hannah's apparent indifference to it. Even when Arnon takes his mother to Germany, she seems willfully ignorant about her grandmother Suzanne Lehmann, who was killed in the Holocaust.

In a German graveyard, Arnon and Hannah search for the stone of her grandfather, but the heavy rain obscures it -- perhaps symbolic of the voyage into an unknowable past. (Similarly,Six Million and One returns to the underground tunnels that David Fischer's father dug in an Austrian forced labor camp during World War II: they are not only concretely authentic, but evocative of the past as a dark maze.)

The Flat demonstrates how the poetic power of metaphor is hardly limited to fiction features. Dismantling Gerda's flat leads to a voyage in time, a literal and figurative attempt at illumination: the opening presents a dark room until the lifting of window shutters lets in light. Later, after we hear about Arnon's family," Meaningful things were left unspoken," the slats come down, darkening the room.

Co-produced by German television, The Flat raises more questions than it can answer. How could a Nazi couple and a Jewish couple remain friends after the Holocaust? Was Gerda's "Berlin" identity more central than her Israeli one, even after decades of living in the new land?

Time is a palpable factor in these documentaries about the Holocaust. On the one hand, the number of living survivors dwindles every year, lending a sense of urgency to record them. But with the passage of time, new, low-cost technology allows for easier filming of elderly survivors and the retracing of their wartime trajectories.

These issues inform Here I Learned to Love, another nonfiction tale from Israel, opening November 2 at the Quad. Directed by Avi Angel, Po Lamaditi L'ehove is based on the book by Itzik Weinberg, Three Mothers for Two Brothers. The film follows his younger brother Avner from Eilat to Poland and Switzerland, where he and Itzik recall the three women who (at different moments) protected them during and after World War II. Tracing survival routes leads them to the National Archive in Krakow, where Avner tells a young employee that he wants to find his real name. He writes down "the name that I am having now," a pungent expression of provisional identity.

The most riveting of the new Israeli documentaries is Numbered, which had its U.S. premiere at the Chicago Film Festival this month. Directed by Dana Doron & Uriel Sinai, its point of departure is the tattoo of Auschwitz survivors, an indelible mark on the arm that is increasingly less recognizable to younger generations. Numbered does not allow for generalization, as each survivor views his or her mark differently. Partly because it is also about the process of recording, Numbered is a significant contribution to the question of how to represent survivors respectfully. Even if it seems like there is nothing new to say about the Holocaust (at least cinematically), young Israeli filmmakers are using the camera in original, stylistically rich, and philosophically meaningful ways.

Annette Insdorf, Director of Undergraduate Film Studies at Columbia University, is the author of Indelible Shadows: Film and the Holocaust, and of Philip Kaufman.