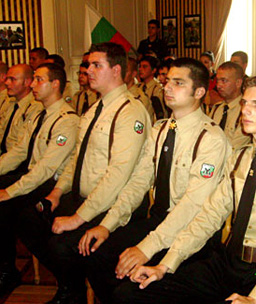 On Wednesday, 88-year old WWII veteran, rabid anti-Semite and racist James von Brunn walked into the Holocaust Museum in Washington DC and opened fire, shooting to death a heroic 39-year-old security guard. Nine days earlier Abdulhakim Muhammad, a Muslim convert, fatally shot army recruiter Pvt. William Andrew Long, 23, in Little Rock, AR. The day before that, controversial abortion Dr. George Tiller was shot dead in his Wichita, KS clinic. And ten days prior to that the FBI arrested a four-man homegrown terror cell that planned to blow up two Bronx synagogues while simultaneously shooting down a commercial jet airliner. There's something crazy and violent in the air lately, with much of it rooted in an alarming increase in intense right-white hate.

Back in April, the Department of Homeland Security issued a report citing right-wing extremism and warned that "White supremacist lone wolves pose the most significant domestic terrorist threat because of their low profile and autonomy -- separate from any formalized group -- which hampers warning efforts." The 9-page document erupted into a political shitstorm, and unleashed a torrent of harsh criticism of DHS Chief Janet Napolitano, who was vilified over her suggestion that returning war veterans in particular might be susceptible to these violent radical groups who could turn them into homegrown terrorists. Those piling on the Napolitano-bashing-wagon included leading conservatives such as House Minority Leader John Boehner, former House Speaker Newt Gingrich and radio blowhard Rush Limbaugh. The attack on Napolitano was so vicious, so partisan and so premature but now she and DHS appear quite prescient, don't they? Funny how two months and back-to-back murders by right-wing wackjobs can shine a whole new light on things.

Earlier in the day Wednesday I appeared on FoxNews' Strategy Room, where a lengthy panel discussion took place about the Little Rock army murder. This was hours before ethe D.C. shooting news broke. Some in the group asked "where's the (media) outrage," and were incredulous as to the lack of coverage of Pvt. Long's killing versus that of Dr. Tiller's. There was also great concern expressed that not enough attention was being placed on this type of violent crime by extremists. I reminded the panel of the April DHS report, but more importantly, of the beating Napolitano took over it. I suppose conservatives will be giving Napolitano and the security report another look after Wednesday's shooting death at the Holocaust Museum.

So why the recent spate of deadly right-wing hate crimes? As Salon.com's Joan Walsh cited, it could be in no small part due to the incendiary rhetoric of talking heads like Bill O'Reilly and Limbaugh, who've been accused of fanning the flames of hate with their inciteful on-air rabble-rousing. O'Reilly relentlessly attacked Dr. Tiller for years, over two dozen times in fact, calling him a "Baby Killer" and accusing him of doing "Nazi stuff," while warning of "Judgement Day." Over on the radio, Limbaugh told his audience last week that President Obama is more harmful to America than our terrorist enemies. Said Walsh on MSNBC's Hardball Wednesday night: "When you say that our president is more dangerous than al Qaeda, you've gone off into crazy nutjobland. You are off the charts crazy, and you are whipping people up."

Is it any wonder then that these right-wing lunatic freaks feel a sense of duty, of obligation, to 'right the wrongs' that these instigators in the media hammer into their psychotic heads day after day? Perhaps law enforcement authorities should begin investigating the role conservative commentators like O'Reilly and Limbaugh play in the death of innocent people. Maybe then these despicable hate-mongering loudmouths will shut up once and for all.