Dutch Jews suffered immensely and disproportionately so under the Nazis in World War II.

Out of 140,000 Jews living in the Netherlands at the outbreak of the war, some 107,000 Jews were deported to death camps such as Auschwitz-Birkenau, Bergen-Belsen, Dachau, Buchenwald, Treblinka, Belzec and Sobibor. At the gas chambers of Sobibor alone, more than 34,000 Dutch Jews were murdered.

It is thus no surprise that the Dutch people, historically tolerant and compassionate, have been deeply affected by such atrocities and will always remember, mourn and commemorate the victims of the Holocaust.

Such compassion was amply evident during the Nazi occupation of the Netherlands, when the Dutch in general and the Dutch underground in particular -- at great personal risk -- protected, hid or helped flee tens of thousands of Dutch Jews.

One of the best known examples is of course the Anne Frank family and the others who were hidden in the "Achterhuis" -- concealed rooms in the company building in Amsterdam where Anne's father had worked -- and who were protected for two years by employees of the company, until stormed by the Nazis on August 4, 1944.

But there were many, many more.

Yad Vashem, a program established to "perpetuate the memory of the six million Jewish victims of the Holocaust" and to "convey the gratitude of the State of Israel and the Jewish people to non-Jews who risked their lives to save Jews during the Holocaust," has, as of this writing, granted 5,351 titles of "Righteous Among the Nations" to the Dutch -- second only to Poland.

A few years ago the Dutch established a unique and powerful "Digital Monument to the Jewish Community in the Netherlands," a virtual monument dedicated to preserving the memory of all the men, women and children who were persecuted as Jews during the Nazi occupation of the Netherlands and who did not survive the Holocaust, the Shoah. 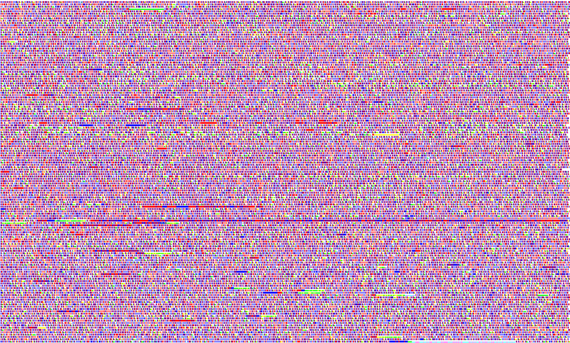 Digital Monument to the Jewish Community in the Netherlands. Courtesy Joodsmonument.nl

The "monument" is a digital screen or home page filled with a dizzying pattern of what appear to be a million colored dots or bars, representing human beings murdered by the Nazis. The colors indicate "whether the person was a man (blue) or woman (red), a boy or girl between six and 21 years of age (green and yellow, respectively) or a child under 6 years of age (light blue or pink)."

The abundance of light blue or pink dots is incomprehensible and almost unbearable. When one interacts with the home page, one can access a wealth of information on the person or the family represented by the bar or dot.

When I interacted with the digital monument I was able to find most of the nearly one hundred Dutch de Wind family members who were murdered during the Holocaust -- some as old as 92 and some as young as 14. My uncle's family tree documents several other very young de Wind victims of the Holocaust -- one as young as five!

Commendable as the Digital Monument is, survivors of the Holocaust and descendants of those who were so dastardly murdered need a more tangible memorial to reflect, honor, remember -- and for all of us to swear "Never Again."

There are several such "tangible" memorials in Europe that carry the names of Jewish Holocaust victims.

The Holocaust Memorial in Miami Beach, Florida, has a wall with thousands of names of Holocaust victims. In Budapest, the names of more than half a million Hungarian Holocaust victims are shown on an eight-metre-high glass wall in the Holocaust Memorial Centre, and in the Pinkas synagogue in Prague the names of 78,000 Czech Jewish victims are listed. In the Dutch pavilion of the former concentration and extermination camp Auschwitz, the Dutch Auschwitz Committee erected a Wall of Names with the names of the 57,000 Dutch Jews who were murdered in the camp.

All these memorials mean very much to survivors, surviving relatives and friends for whom these names are the only tangible connection with their murdered loved ones. The names are a lasting memory of the horrors that they suffered and a reminder of the consequences of racism, discrimination and war.

The Dutch Auschwitz Committee has announced plans to erect a monument in Amsterdam -- the Dutch Holocaust Memorial of Names -- that will list the full names of all 102,000 Jewish and 220 Roma and Sinti Holocaust victims "individually and collectively." The memorial will show "today's and future generations where racism and discrimination may finally lead to," says the Committee.

Polish-American architect Daniel Libeskind, himself the son of Holocaust survivors, will design the Dutch Holocaust Memorial of Names.

Libeskind emigrated with his family to the United States in 1964 and has "achieved renown as an architect with his designs for the Jewish Museum in Berlin and the master plan for the reconstruction of the site of the World Trade Center in New York," according to the Committee. In 2011 Libeskind received the Annetje Fels-Kupferschmidt Award, presented annually to an individual or organization for the exceptional way it has realized the goals of the Dutch Auschwitz Committee.

The monument will be constructed in beautiful and peaceful Wertheim Park in Amsterdam, the oldest park in that city, located in the center of a former Jewish neighborhood. The Dutch Auschwitz Committee: "[The Park] is surrounded by memorial sites, such as the Hollandsche Schouwburg, the Jewish Historical Museum, the Portuguese synagogue and the Resistance Museum." The park is also home to the Mirror Memorial 'Never Again Auschwitz', where a National Holocaust Commemoration service takes place every year.

In January of this year, Jacques Grishaver, chairman of the Dutch Auschwitz Committee, announced the initiative to build the memorial in the Dutch De Telegraaf with these powerful words:

Waiting any longer is not an option. I want that the names of the over 102,000 Dutch victims of concentration camps are there, forever to be read. By older people, younger people, future generations. The last remaining survivors of the gas chambers, of the gallows, of the bullets and of the sticks are dying out. They must know that the dead live on in our memories.

The memorial is to be completed in 2015.

To read more about this noble project and to support it, please click here.