Next month, players from 52 countries around the world will be convening in Glasgow for the 2016 Homeless World Cup - all for the love of football. 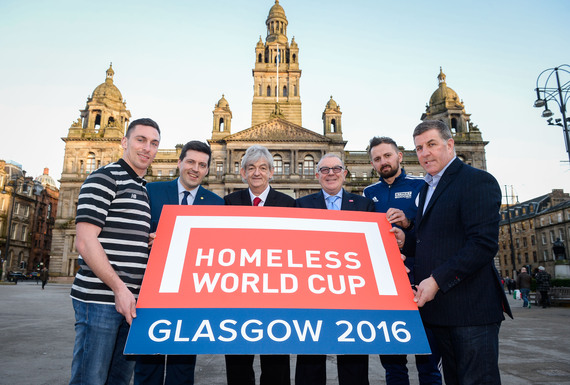 I have dedicated over 20 years of my life trying to tackle the global homelessness crisis (currently estimated to be over 100 million people), and although the general response to the Homeless World Cup is overwhelmingly positive, I'm still surprised by the widespread misconceptions around the issue of homelessness.

Homelessness is more than not having a roof over your head; it's about loss of identity and utter social exclusion. Homeless people are some of the most vulnerable and ostracised in society and it's important that the Homeless World Cup acts as a tool to drive impact and change. Across the world, homelessness manifests itself in different extremes; from the hidden homeless (people who exist out of sight, couch surfing, staying in hostels or squats) to those more visible, sleeping rough. In reality, there is no such thing as a 'typical' homeless person.

Through the Homeless World Cup, we can start to break down and challenge these negative stereotypes. Typically, when members of the public see a beggar on the street, the common response is to avoid conversation and eye contact, as homeless people are often perceived to be dangerous or mentally unwell. However, during the Homeless World Cup, the image of a homeless person is completely transformed. By turning a street corner into a football pitch and giving the players a football kit to represent their country, suddenly they are no longer avoided. Instead they are cheered on by thousands of spectators.

The efforts of the Homeless World Cup stretch way beyond the action on the pitch. Beyond the main tournament, we have the support of our national partners around the world who work with the players, helping them to overcome a variety of issues from addiction to self-confidence and lack of motivation. So in many ways, simply getting to Glasgow is cause for celebration! During the tournament, players learn the benefits of working as a team, meeting new people from different cultures and becoming ambassadors for their country.

Unlike a traditional football tournament, players are only allowed to take part in the event once, as the Homeless World Cup is designed to mark the end of their homeless journey. Through the dedicated work of our global partners, most players will have homes and jobs lined up and others use the tournament on their CV- a number of players even become football coaches! We're also fortunate to welcome world-renowned referees, who volunteer their services to take part in the competition, so the players can experience working alongside some of the best in the modern game.

To ensure the tournament is as exciting as possible for players and spectators alike, the Homeless World Cup has its own unique format taking inspiration from Street Soccer. Unlike a traditional 11-a-side tournament, teams consist of four players on each side and the match lasts seven minutes each half, creating a thrilling, fast paced game. Whilst the tournament is competitive, it's also incredibly inclusive. Losing teams are not sent home as soon as they are knocked out of the tournament, they will stay in Glasgow to cheer on the remaining teams and collect their celebratory medal on the final evening.

Through the Homeless World Cup tournament we aim to create hope and drive change to impact individual's lives, but the work doesn't stop with the final whistle. By bringing 51 countries together in Glasgow, we want to highlight the scale of this extreme global issue, illustrating to the public that homelessness is a worldwide problem that needs to be tackled. Our aim is to create a world where all homeless people, whatever their location, can gain access to one of our transformative programmes. Through the publicity of the tournament, we hope to educate the public on the homelessness crisis, with the aim of increasing funding, volunteering, optimism and gestures of goodwill- creating impact and big change.