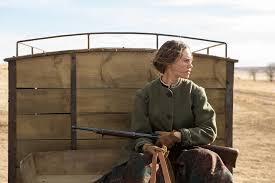 There are Pawnees and claim jumpers, rifles and Colt Repeaters, young prostitutes waiting for customers in a saloon and mules pulling plows in The Homesman, a western directed by Tommy Lee Jones, in which he co-stars with Hilary Swank. But the person behind the plow is Mary Bee Cuddy (Swank) an old maid in the parlance of the time working her farm alone.

She's also the one cooking the supper she serves to an eligible bachelor neighbor right before she proposes marriage. She's still of childbearing age, has money in the bank and their union is a logical combination for their adjoining farms. "You're too plain and too bossy," he tells her, right before grabbing his homemade cheese and hightailing it out of there.

There's also plenty of sex in this movie but it's the spread-your-legs-and-accept-my-seed variety, usually accomplished with the woman's mom lying horrified in the same bed next to her daughter or the standing version completed in the space of time between slopping the hogs and feeding the mules. Yup, it's a wonder all the pioneer women who traveled from the East didn't lose their minds.

The plot revolves around madness. And loneliness. And doing the right thing. Three women went crazy not just because of the bad sex, the infant mortality, the harsh winters and the meager rations when a harvest was lost, but because all semblance of a life they'd once known lay at the bottom of a trunk full of keepsakes.

They had faith, though, in God, in the man they'd wed and in the promise of children. Until they lost all of it along with their minds. Mary Bee isn't like these women. Most of them were required to marry and leave their parental homes. Mary had the wherewithal to make her own choices, but she hadn't counted on living "uncommonly alone."

She's the one who volunteers to be the homesman, the person who transports the three mad mothers from Nebraska back to Iowa. They're babbling lunatics tied up in a wood-frame wagon. The full sense of her responsibility prepares Mary Bee to grab at the chance of help when she encounters George Briggs (Mr. Jones) strung up in a tree. She frees him on his promise of aid. 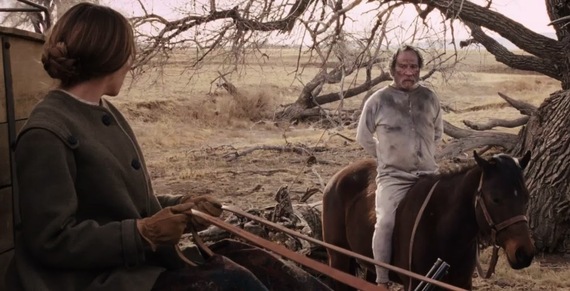 There is the hope of redemption for everyone: the lunatic moms who minimally respond to kindness, for Mary Bee who makes another bold move involving this new man in her life and for Briggs, if that really is his name, who survives and tries to do right.

The Homesman is a captivating story and Tommy Lee Jones got the history right.