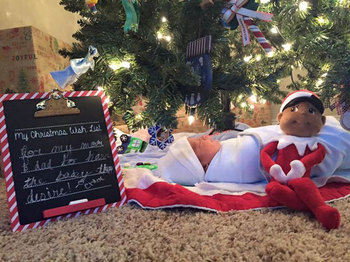 Another low for Craigslist:

A 47-year-old Georgia woman was arrested after attempting to illegally obtain a baby for her teenage daughter.

Detectives started investigating Elaine Williams after a citizen called police about a suspicious Craigslist ad. The post asked for unwanted babies, saying mothers could drop them off in a "baby box".

According to investigators, Williams was attempting to buy a baby for her 14-year-old daughter. Police say Williams told them "her daughter wanted a baby and would get one with or without her help, so she decided to help."

The ad itself was up for 12 days in the "Baby and Kid Stuff" section on Craigslist. It was titled "Home for a newborn baby."

"They were prepared for a baby," said Forsyth County Sheriff Duane Piper. "The 14-year-old had a crib, formula, diapers, baby gifts." 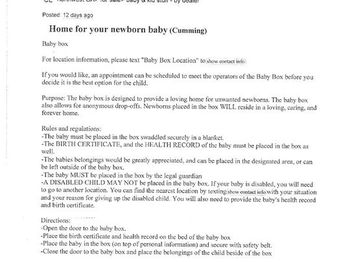 This may be a case of the world's most indulgent and most enabling mother who put a great deal of thought into the specifics of this human gift.

Some news outlets mistakenly reported this case as: "Woman tried to buy baby for her 14-year-old daughter," yet in actuality there was no offer to "buy" a baby. She wanted it to simply be disposed of, with clothes if possible.

So where would this mother - or anyone - get the idea that there are "unwanted" babies that one might drop into a box?

Baby "drop boxes" are actually common throughout Europe and parts of Asia, despite opposition. They are a variant of so-called "safe haven" laws that exist in every US state.

While the details vary state by state, safe havens legalize anonymous baby abandonment when done at approved locations such as hospitals, fire houses, police stations and churches. States passed these laws beginning in 1999 despite outrage by adoptees and adoptee organizations, birthparents and birth parent organizations and others who strongly objected to babies being left with no possibility to ever trace their roots. Unlike the baby requested by Ms. Williams for her daughter, babies left in safe havens have no birth certificates to ever uncover.

Those who oppose safe havens argue that babies have always been left at fire stations, hospitals and churches and "safe havens" (aka baby dumps) would merely encourage more abandonments with no way to ensure the person leaving the baby is the mother. Encouraging these abandonments as is now being done by the National Safe Haven Alliance , denies mothers under duress or suffering postpartum depression time to think or avail themselves of any options such as options counseling. In other words, it exploits mothers in crisis. Safe haven laws have been called seriously flawed and an "ineffective band-aid" in preventing infanticide.

Elizabeth Throssell, a spokeswoman for United Nations Committee on the Rights of the Child, urges countries to provide family planning and other support to address the root causes of abandonments, like poverty, instead [of legalizing abandonment].

The Donaldson Adoption Institute published a report entitled "Unintended Consequences: Safe Haven Laws are Causing Problems, Not Solving Them" in 2003 which delineates many objections and states that any solution intended to save babies' lives must also "address the problem's underlying causes - which current "safe haven' laws do not even pretend to do."

The bottom line is that anonymous legal abandonment is contrary to our cultural ethics and well-conceived public policies that promote the safety and welfare of newborns and their mothers.

Despite the many concerns against them, safe havens were enacted into law in every state because they were pushed by the wealthy and powerful adoption industry lobby, The National Council for Adoption, whose goal is acquiring more "products" for those eager to pay tens of thousands of dollars for each baby left.

Recently Indiana legislators went a step further and proposed "drop boxes" providing a local source for the idea proposed by Williams in her Craigslist ad.

Williams also did not invent the idea of a baby being a "gift." Adoption has long been touted as a "loving gift" to convince mothers to let go of their babies. No mother, however, becomes pregnant with the idea of giving her baby as a gift.

Adoption has also been described by adopters as a "gift of God" with some quoting biblical citations they relate to the legal transfer of a child's custody.

If adoption is a "gift of God" it is a re-gift. Did God not give every child first to the mother who conceived and bore it? Is not, in fact, any mother who places a child for adoption thus insulting God by giving away his gift to her?

An organization which calls itself Pure Gift of God ironically exists to provide grants to help adopters "overcome the financial barrier to adoption" or in other words to pay for their "gift."

The ultimate "baby as a gift" concept however played out in a recent video of two children's excitement at seeing their newborn adopted brother under the Solstad family Christmas tree in Texas. The video went viral with most finding it "adorable." Another media source found it heart-warming. "heart-warming"

It is indeed sweet that Nathan is welcomed with enthusiasm, joy, excitement and cheers. Few seemed to notice what was wrong, however, with this picture.

One exception was Ethan Martel of the UK who saw a problem with the video , writing,

"These sisters received a human for Christmas" 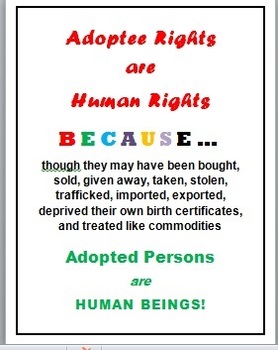 Martel imagines the sisters going to school and being asked by their teacher what they got for Christmas: "Our parents bought us a perfect baby boy who has 50,000 Likes!" Is that how we want children to think of a sibling?

Georgia-Lee Reavis Myers Smith points out that the sisters, the "recipients" of this Christmas gift, will "now believe that babies come from Santa under a Christmas tree and they are gifts." Georgia writes:

"...to conceive and give birth to a child is indeed a gift, but a child removed from its natural birth family and given as a gift is wrong."

"I personally find the idea of unveiling a person as an Xmas present fucking odd. I understand it's a Christmas miracle, it's a miracle, but I'm more than happy to be labelled a party pooper for finding it odd."

Several adopted persons thought it was more than odd and wrote of their disgust at this "gifting" of a child," calling it "sick."

"At first look many might think 'oh cute' or 'precious.' This is an example of how accustom [sic] society has become to the commodification of children through adoption..... even the Humane Society campaigns not to give animals as gifts during the holiday season... and yet these people thought this was OK. As an adoptee, I am outraged at the new low of commodification... "

A human as a gift is more than odd. It is the epitome of adoption as the commodification of human beings. Humans are not - or should not be -for sale. They are not gifts either, in the actual, material sense. The Solstads are teaching their children a very negative lesson and giving their son Nathan a lifelong legacy of having been given as gift to his two older sisters.

Lest you think that adoptees are over-reacting, the only people other than adoptees that were given as gifts were slaves. Thomas Jefferson gifted slaves:

To provide dowries for his sister and daughters, and occasional gifts to other family members, Jefferson transferred eighty-five slaves by gift. His record of slaves "alienated" from his ownership--whether by sale or gift--in the ten-year period from 1784 to 1794 listed 160 men, women, and children.

He did this because they were his property, things to be sold or given as gifts.

Martha Saxton (Being Good: Women's Moral Values in Early America, 2003) writes of a St. Louis trader taking a crying baby from its mother, both on their way to be sold into slavery, and made a gift of it to a white woman standing nearby because its noise was bothering him. Saxton also notes that American slave women were given to white women as gifts from their husbands, and as wedding and Christmas gifts.

It is the commercialization of adoption and the huge fees paid that create this objectification of human beings. The average fee to adopt is $40,000, higher or lower depending on color, age and health, not unlike the pricing of cars. A white newborn such as the Christmas gift baby is top of the line; those in foster care are practically free.

Like any other purchase, adopted children are often "returned" or rehomed. The rate of disrupted adoptions - an adoption process that ends after the child is placed in an adoptive home and before the adoption is legally finalized - is estimated to be 10-20 percent. The GAO reported that about 1 percent of the public agency adoptions finalized in fiscal years 1999 and 2000 later were legally dissolved (terminated after finalization).

The report cautioned that the one percent figure represents only adoptions that failed relatively soon after being finalized, so the number of dissolutions could have increased with time (U.S. GAO, 2003) per the Child Welfare Information Gateway website. 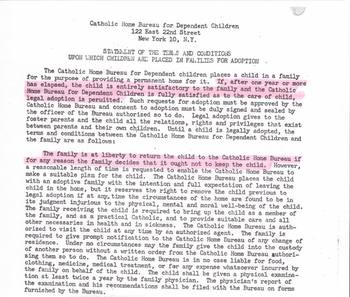 When we as a society reduce adopted human infants to gifts and turn a blind eye to the buying, selling and commodification we call adoption...when we see these obscenities as "cute" - it is no wonder that Williams sees it appropriate to give her 14-year-old the gift of a human infant.