If Egyptian President Abdel Fattah el-Sisi is expecting the United States to deliver the $1.3 billion in annual military assistance without any delays or restrictions, he may be in for a "rude awakening," as Senate Foreign Relations Committee Chairman Robert Menendez said during a hearing on Egypt earlier this month.

Thanks in significant part to Washington's aid package to Cairo over the past three decades, the Egyptian military has developed into perhaps the strongest and most technologically advanced in the entire Middle Eastern region. As long as Egypt continued to abide by the 1979 Camp David peace treaty with Israel, its leaders could expect massive amounts of defense equipment and training services from the world's most capable military force. Symbolically, Egypt could also market itself as Washington's closest and most trusted partner in the Arab world.

The conviction of three journalists from the Al-Jazeera English network over a week ago on frivolous and unproven charges, coming after the sentencing of nearly a thousand prisoners to death in just a few trials, has put that reputation into considerable jeopardy. Members of Congress in both political parties are now beginning to question whether the United States should continue to pump so much aid money into a regime that is either stonewalling the building of democratic institutions, or is trying to destroy the very hopes and aspirations that fueled the country's Arab spring protests over three years ago.

Statements of condemnation from Secretary of State John Kerry aside, the Obama administration has largely viewed the U.S.-Egypt relationship as a strategic one that should continue with the least amount of resistance as possible. This viewpoint is understandable for a variety of understandable reasons: Cairo, for instance, has kept the peace with Israel for over thirty-five years. The Egyptians also grant privileged access for U.S. naval assets in the Suez Canal, all the while providing the U.S. with critical counterterrorism support in the Arab world.
Normally when the Egyptian Government does something foolish or questionable, U.S. administrations of both parties have employed symbolic measures in order to send a friendly warning. The Obama administration has continued this trend, generally opting for delays in military assistance to get its point across. Indeed, after the Egyptian army's overthrow of Mohammed Morsi in July 2013, the U.S. withheld a delivery of Apaches and over $500 million in U.S. money. For the Egyptians, this was a slap in the face, but for the White House, it was the very least that the United States could possibly do to show its displeasure. 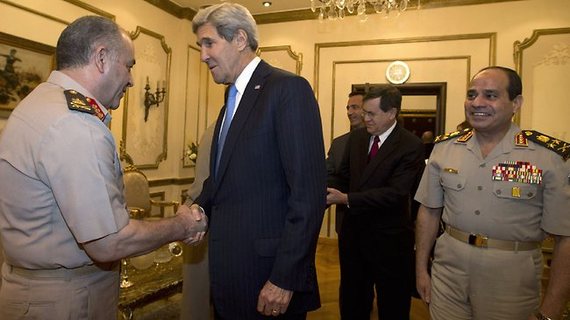 Senior members in Congress, however, are not nearly as patient as the White House. Senators Patrick Leahy, Rand Paul, John McCain, Robert Menendez, and Lindsey Graham have all been upset with the way Egypt has conducted itself since last July's overthrow of Morsi's government, including but not limited to the new leadership's increasingly autocratic behavior. It is thus not a complete surprise that the Senate Appropriations Committee, one of the most powerful committees in the entire chamber, elected to boldly cut $300 million from the Foreign Military Financing program--the same program that the U.S. uses to deliver military assistance to the Egyptian army.

But there's more: equally significant to the aid cut is language drafted into the foreign assistance bill that would require the Egyptian Government to undertake a number of major political reforms before receiving further U.S. taxpayer money. Egypt, for instance would have to release every detainee locked up for protesting or expressing one's political opinion. All journalists would have to be freed; those incarcerated for belonging to political organizations or societies (including the Muslim Brotherhood) would have to be released as well; prisoners must be given due process "consistent with international norms;" and Cairo would need to enact policies that protect freedom of speech, assembly, and the ability of civil society organizations to operate. The Secretary of State would have to certify to Congress that Egypt has done all of this, and only then would the first tranche of military and economic assistance for 2015 be sent to Cairo.

Fortunately for Sisi and the Egyptian military, the House of Representatives are far easier on Egypt: the House Appropriations bill protects all $1.3 billion in military assistance, and contains only one certification for the State Department. The committee's decision to vote down an amendment by Rep. Adam Schiff to reallocate the aid package in a 35-11 vote is a clear message that the House considers America's relationship with Egypt vitally important for the U.S. national security interest.
As the full House and Senate prepare to vote, it's safe to assume who the Egyptians are rooting for.