In June 1971, President Richard Nixon declared a "war on drugs." Four decades later, the United States has spent an estimated $1 trillion on the battle with no end in sight.

"What have we accomplished?" asked filmmaker Eugene Jarecki in an interview with The Huffington Post. "Drugs are cheaper, more available, and being used by younger and younger people than ever before."

Jarecki's latest documentary, "The House I Live In," playing now in New York City and opening in Los Angeles on Friday, takes a look at what the nation's efforts to curb illegal drug sales have produced.

Perhaps the most palpable change, he said, is that the U.S. has transformed into the prison capital of the world.

The nation has 5 percent of the world's population, yet accounts for 25 percent of its prisoners. That's 2.3 million Americans behind bars, including 500,000 currently locked up for nonviolent drug offenses, according to the film. And yet, the documentary says, the rate of illegal drug use remains the same as it was when President Nixon began the battle.

Some academic research has shown that the burgeoning prison population is responsible for a small percentage in the drop in crime rates over the last two decades. But Jarecki and many researchers argue that the return on locking up people diminishes substantially as more and more people are put behind bars.

What the drug war has accomplished is the creation of a powerful special interest that Jarecki and other prison reform advocates describe as the "prison industrial complex" -- an increasingly influential and profitable private prison industry.

"The prison industrial complex is perhaps, at least domestically, the most striking example of us putting profit before people," Jarecki said. "It all stems from one basic misunderstanding: that the public good can be shepherded by private interests."

But, according to Jarecki, it's more than just private prison companies that hinder the efforts to reform the judicial system.

"Every congressperson will tell you that one or another corporate interest is very important to them," Jarecki said. "They have to weigh the broader interests of their constituents against the priorities of keeping jobs flowing to their district and cash going into their campaign coffers."

Like so many other debates today, Jarecki said, it largely comes down to jobs.

"If we went back to the imprisonment rate we had in the early '70s, something like four out of five people employed in the prison industry would lose their jobs," Jarecki said in a previous interview with HuffPost. "That's what you're up against. That's what makes it hard, even though we know better."

Jarecki's policy prescription is not to hand all those prison workers pink slips, but rather to channel their efforts toward rehabilitation rather than punishment.

"These are people with a vast amount of experience," Jarecki said. "These people would already have a new home in this more compassionate system."

Corrections officers wouldn't be the only ones better employed with an end to the drug war. According to Jarecki, police would be able to spend more time tracking down murderers, rapists and robbers; judges wouldn't have their hands tied by mandatory minimum sentences; and overworked public defenders would see their case loads dramatically reduced.

One of the most striking aspects of Jarecki's documentary is the broad swath of voices that express their dismay over the drug war. Prison guards, police officers and judges all see little hope of winning this war.

"That was probably the biggest surprise of making the film," Jarecki said. "I had imagined that prisoners would hate it and those who run corrections and enforce the laws would be advocates. I was astonished that I would find those people working in the system that are themselves victimized."

Jarecki would like to see the U.S. move toward a decriminalization model much like Portugal's. But he knows that transformation won't take place without a fight.

Right now, Jarecki said, battles are being waged at the local level.

In New York City, civil rights advocates are fighting the police department's controversial "stop and frisk" policy, which has led to warrantless searches of hundreds of thousands of mostly minority New Yorkers.

In California, a pending ballot initiative would tweak the state's "three strikes, you're out" law so that a person's third offense would have to be violent to trigger a mandatory life sentence.

On the Jarecki documentary's website, visitors can type in their zip code to find pressing legislative issues in their community.

"The right and the left are aligning themselves against the drug war. Its days are numbered," Jarecki said. "The question is how will we embark on a path of well-guided reform."

"The House I Live In" won the grand jury prize for U.S. documentary at the Sundance Film Festival in January. 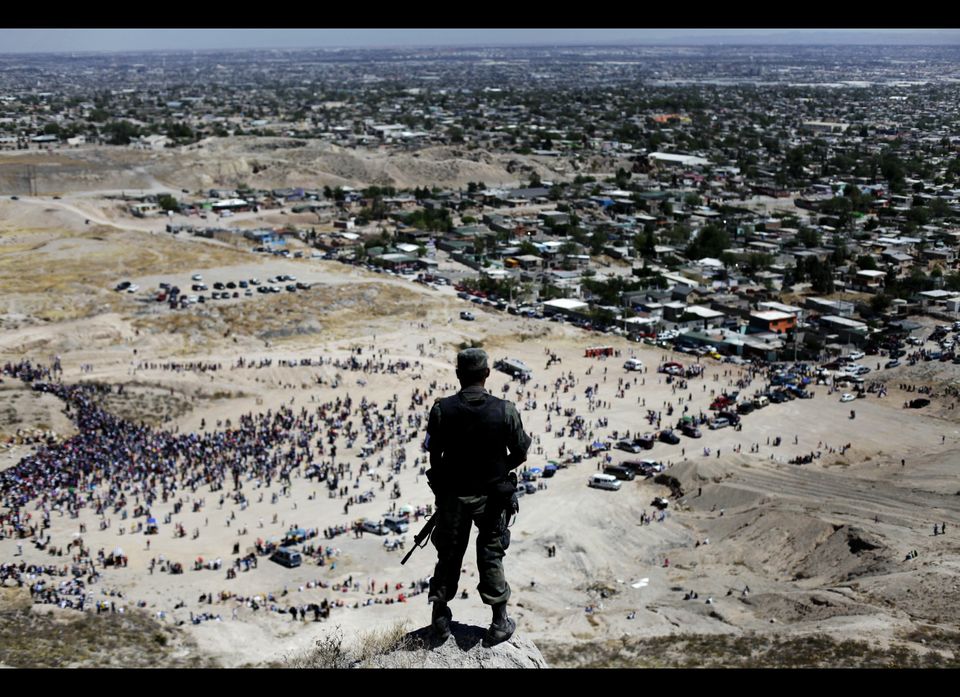 1 / 10
In late August 2012, prosecutors in the western Mexico state of Michoacan say soldiers found charred human remains buried in at least five clandestine graves and left on the slopes of a hill in the town of Tuxpan, <a href="https://www.huffpost.com/entry/mexico-violence-tuxpan_n_1819909?utm_hp_ref=mexico-drug-wars" target="_hplink">according to the Associated Press</a>. Prosecutors said the troops found more than 150 pieces of bone, some mixed with pieces of wood and coal.
AP