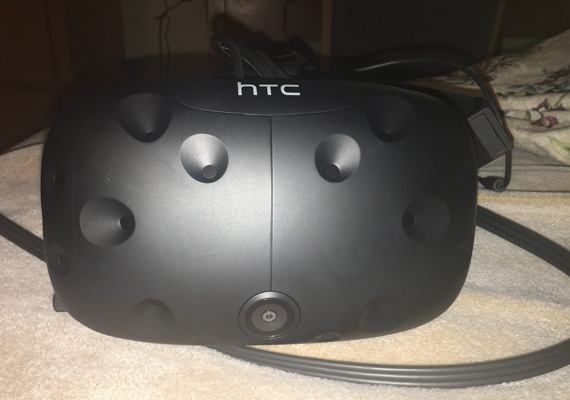 Earlier this year, I wrote that Samsung's Gear VR virtual reality headset may provide some thrills, but is ultimately empty at the end. I did see potential for mobile virtual reality and I still do. However, after using the Gear VR for several months, I wasn't interested in the virtual reality world any longer.

Then, it happened. I was in Micro Center in Tustin, CA, and I saw that they just received the HTC Vive in. I kept looking at the box, and the salesman convinced me that even though $800 is a lot to spend on a device, I had 30 days to return it just in case I wasn't satisfied. I actually came close to returning it in one day.

I knew my Microsoft Surface Book, which has a discreet GPU, didn't meet the minimal requirements, but I saw that other people have been able to get it to work so they could run at least some apps. I spent several hours setting the system up and there was no luck. I felt like beating the Vive up, but realized I wouldn't be able to return it.

The next morning, I purchased a Dell XPS 89000 desktop system, which is the cheapest one ($1100) that the Vive could be used with in order to completely work. I realized that I could always return the XPS 8900 if I returned the Vive. Needless to say, after two days, I think I'd rather go hungry than return my virtual reality bundle. The experience that the HTC Vive offers is not only mind-blowing, but it offers a glimpse into what the future may hold.

I thought AltspaceVR, which allows you to meet up with friends and others in different virtual reality spaces, was a pretty decent experience on the Gear VR. However, it gave me motion sickness since, in real life, I stood in one place while my avatar in the virtual world moved with a controller. The HTC Vive turns AltspaceVR into something completely exhilarating and freakish at the same time since your avatar walks and makes the same motions you do. Of course, this all depends on how much open space you set up with the Vive, but walking to the edge of a cliff is so real that you feel your heart racing.

Then, there is the Vive's most popular app, The Lab, which is a playground of VR toys and experiences. All are simple, but they are also wondrous for those who are new to VR. The first experience I tried is referred to as a "postcard" that transferred me to Vesper Peak in Washington. As I walked in my living room (I literally forgot I was in a living room), I was walking in the grass, looking at the beautiful scenery. Soon, a robotic dog followed me and wanted to play. I picked up a stick with the motion controllers (which act as your hands) and threw it. The pooch fetched the stick and brought it back. I then decided just to rub the robotic dog's belly. Though I wished it was a golden retriever, the robotic dog and I still had fun.

Then, there is Job Simulator, a game which makes being a chef, office worker, or auto mechanic more fun than ever. As a chef, I enjoyed overcooking eggs, making tea, and even using the blender to make a drink. This app made me realize I would never make a good chef, but that's beside the point. I make a much better office worker and the fact I was able to breeze through this part of the game means that all my years of office work finally paid off.

There are other experiences that I have to try (and will report on), but I'm sort of low on cash now. I did have enough money to stock up on oatmeal and Ramen noodles for the rest of the month, since that's all I can afford. Oh, and forget about juice; it's all going to be water until August. Perhaps I'll find a virtual reality restaurant where I can eat lobster and drink the finest wine on the planet. It's only a click away.