On September 25-27, the international humanitarian community convene in New York City to announce the post-2015 Development agenda. The so-called Sustainable Development Goals (SDGs) are a new set of global aims designed to follow up the Millennium Development Goals (MDGs) that have underpinned UN processes since 2000, and will cover the period 2016-2030. 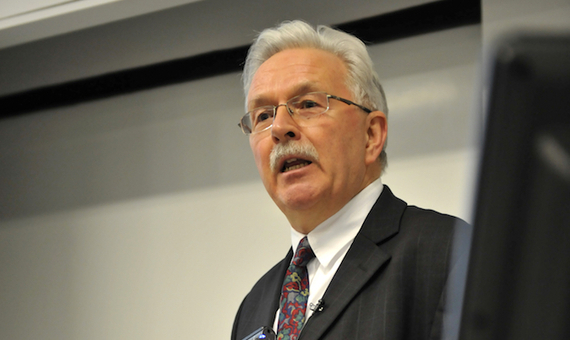 I spoke to David Hulme, Professor of Development Studies at the University of Manchester and head of Brooks World Poverty Institute about the background to "all this goal-setting," and his thoughts on why reducing poverty and inequality, globally, should be a priority.

Listen to the interview.

Could you explain a little bit about the Millennium Development Goals, or just the notion of all this goal-setting stuff? Well, the United Nations has set goals for the last 50 or 60 years. Usually they've been specific goals, like eradicating smallpox, eradicating polio, getting more kids into primary education. But in the 1990s there was a real dynamism to this process, following the end of the Cold War, and NGOs emerging and Civil Society getting active. A whole set of UN conferences set hundreds of different goals and targets for the world. Nobody quite knew what they were doing, but in the late 1990s, first the OECD's Development Assistance Committee pulled a few of them together into a list. Then the United Nations began to pull them together into lists. Then in 2000, 2001, after lots of politicking, lots of which was hidden, eventually the United Nations agreed on the Millennium Development Goals, a list of eight goals with about 20 targets. The number of targets was increased, with 60 indicators. The overarching message was to eradicate poverty, but actually it was basically to reduce poverty significantly, between 2000 and 2015. Then - when you say something is ending in 2015, people start saying, what's going to happen after 2015? So now all this goal setting has become a fairly standardised UN process.

That's relatively new - as far as development goes?As far as Development goes, but as far as anything goes, because these goals now have moved from Millennium Development Goals, that were about poverty reduction in developing countries, to an overarching set of global goals, for all countries. One of the big differences about the Sustainable Development Goals is that they will be universal. All countries are meant to commit to pursuing them. So we're not just monitoring what's happening in poorer countries and developing countries. In a way, every country in the world, or 193 member countries, should actually do something, if they sign up to them.

Why do you think it's important, or do you think it's important for there to be universal, overarching goals?I probably don't agree with the main reason that most people agree with. Which is that, when you've got goals and targets it makes it more likely that you can get organizations and individuals to pursue those goals and targets. A sort of management by objectives focus, a results-based management focus, and that's very much where the Millennium Development Goals came out of. That actually, if we can set goals, and then we can get people to - not necessarily form a treaty, but to agree to them, then we can get individuals and organizations to pursue those goals. I mean, that's worth doing - it's worth trying, but I think actually more important is, basically, challenging social norms, and changing social norms. I think the main achievement of the MDGs, and the main achievement of the SDGs will be a more generalized shift to think - yeah. We should reduce poverty, and we should put more effort into that. Yes, we should be looking at inequality, be concerned about it, and we need to do something about it. Yes, sustainability is incredibly important. I tend to see it in that broader sense of moving towards getting people to change the social norms that they sign up to. If you could get it to extend into effective management by objectives that would be nice, but there's a whole lot of study of management by objectives and it doesn't always achieve its goals. Value-change is what interests me.

Why do you think it's important that either inequality, or poverty, or both are reduced - or eradicated?I think it's important to reduce poverty because it just seems absolutely immoral to me that we live in an affluent world - we have more than enough food, we have more than enough technology, finance and understanding to ensure that people get their basic needs. That wasn't the case in previous generations. The amounts of world resources that you need to reduce the suffering of extreme poverty is relatively limited. I think there's a real need to recognise that we need to be attacking poverty and inequality at the same time - and that actually, tackling inequality will mean that you tackle poverty more effectively. More broadly, it will help to create the sorts of societies where we want to live, people more generally, and certainly the sorts of societies where one would want one's children and grandchildren to live. Particularly when you look at inequality. There have been several books that have looked at "the one percent", but in a way it's going beyond that. It's the 0.01, or the 0.001 percent. Enormous amounts of wealth and assets are being controlled by small numbers of people. Resources that were shared more equitably would be able to be used to achieve social goals.

Hear the original, including David's thoughts on shifting global power dynamics and the refugee crisis at Impolitikal.com.