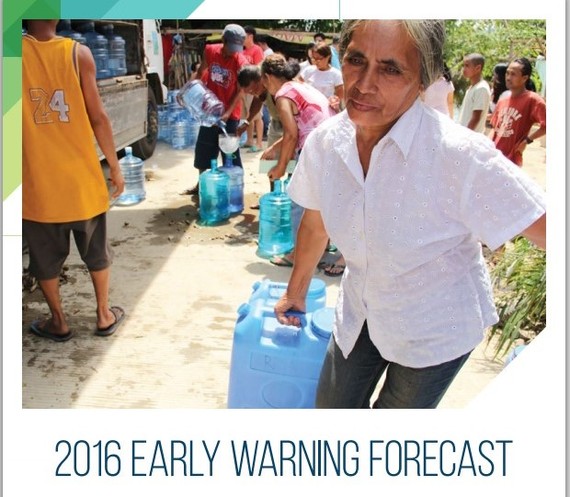 If we have learned anything from living in our increasingly globalized world, it is that no community or no nation stands in isolation. For better or worse, we are all connected. This makes our existence on this planet simultaneously more creative, more dynamic, more complex and more dangerous. Inevitably, what goes on "over there" will somehow affect us "here."

Anyone working in the humanitarian sphere has experienced this complexity first hand. It's becoming ever more evident that linkages among global poverty, climate change, conflict and migration undermine political and economic security and trigger humanitarian emergencies that are more frequent and of a greater magnitude, and which are outstripping the ability of local and international aid agencies to respond.

Given these linkages and the rising vulnerability of global populations to both conflict and disaster, there is a vital need for an evolution in the way the international community thinks about humanitarian response and sustainable development. We need to move beyond short-term mobilization for the latest disaster or applying the Band-Aid approach to an emergency in a seemingly isolated "fragile" state. In order to better foster global security and avoid the disaster in the first place, we need to approach recovery and resilience with a long-term time frame in mind as well as a more holistic understanding of the importance of sustainable development. Breaking people out of the cycle of poverty will make them more resilient in the face of the future disaster. It will make them less likely to flee their homelands for an uncertain future abroad. And it will strengthen their communities, ensuring they are not the next fertile ground for a terrorist movement to breed. 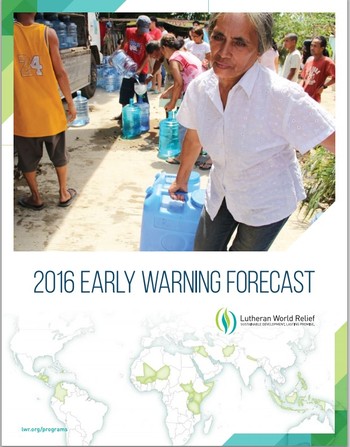 For the past 70 years, Lutheran World Relief has worked in some of the world's poorest locales helping communities through some of the most complex emergencies, and our experience on the ground has given us a better idea of the complex relationships among poverty, human dignity and security.

To that end, the global staff of LWR has compiled this 2016 Early Warning Forecast that includes the regions we are monitoring, the work we are doing in these areas and the steps we'd like to see the international community take to address some of these challenges.

Among the immediate challenges the humanitarian community will face in the next year are:

With the rising fear of terrorism in our homeland accompanied by an increase in xenophobia in reaction to unsettling world events, international humanitarian development is needed now more than ever. It would be ill advised, and in fact not realistic, to take an isolationist stance. It is a moral imperative, and in our best interest, to engage as global citizens.

So what should we as a nation do in the face of this fear and uncertainty? We should join with the international community in redoubling both humanitarian response and building the resilient and inclusive development called for in the Sustainable Development Goals that the United Nations adopted in September 2015. This effort should be aimed at empowering local civil society and communities in need to help them become more resilient to the inevitable new crises they will eventually face, and to reaffirm the long-term commitment to sustainable development made by governments, businesses, as well as the faith-based and charitable community.

In the end, pursuing short-term self interest will come at great cost--which we will pay in the loss of long-term freedoms and true security.